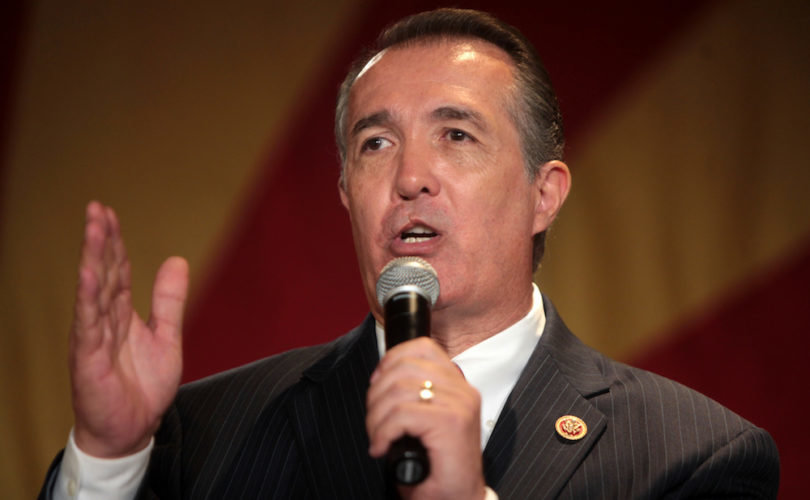 WASHINGTON, D.C., April 14, 2016 (LifeSiteNews) – The fight to end abortions on the basis of the child's race or sex “is the civil rights struggle that will define our generation,” Rep. Trent Franks said this afternoon.

Congressman Franks, R-AZ, made the statement as the House Judiciary Committee held a hearing on his bill, the Prenatal Nondiscrimination Act (HR 4924). Proceedings are still going on as of press time.

His bill would ban abortions motivated by discrimination due to the child's race or sex.

“Life itself is the most foundational of all civil rights,” he said.

“In America, abortions are targeting unborn children for simply being the 'wrong color' or the 'wrong sex,'” he said just before the hearings began. “This is not who we are as Americans!”

Rep. John Conyers, D-MI, dismissed the act as “the latest attempt to erode the constitutional right to an abortion, guaranteed by Roe v. Wade for over 40 years.”

The bill is “patently unconstitutional,” he said, because a woman has the right to have an abortion before the point of fetal viability for any reason whatsoever.

“I'm really disturbed that we're having this hearing today,” said Rep. Steve Cohen, D-TN. “This is really an assault on a woman's right to choose.”

He said the original bill, which invoked the name of Frederick Douglass, “besmirched the name of” the great abolitionist.

Pro-life witnesses told the committee that the bill addressed the nation's long history of eugenics intended to curtail the minority population. Catherine Davis of the National Black Prolife Coalition testified that Planned Parenthood stepped up its population control efforts in 1939, when Margaret Sanger launched the Negro Project.

Supreme Court Justice Ruth Bader Ginsburg, she noted, had said, “At the time Roe was decided, there was concern about population growth, and particularly growth in populations that we don't want to have too many of.”

Sex-selective abortion is a more widely recognized problem globally, but witnesses say the issue has increasingly been found in North America, as well. Worldwide, experts estimate that more than 160 million girls are “missing” due to the practice of sex-selective abortion. Former President Jimmy Carter called sex-selection abortion “the worst human rights abuse on earth.”

“Western nations such as the UK and the United States have seen a spike in sex ratio imbalance within certain immigrant populations (specifically 'Asian-Pacific') inside their borders within the last 20 years,” Anna Higgins of the Charlotte Lozier Institute testified.

But Miriam Yeung of the National Asian Pacific American Women's Forum called the proposal “duplicitous.” The bill, which she branded “racist,” subtly “accuses black women of being irresponsible and, worse, intentionally deselecting babies who share their own race.”

She also said it cast a net of suspicion over Asian-American women, who hail from nations where sex-selection abortion is common practice.

However, she made clear that her organization's opposition is rooted in its support for abortion-on-demand. “The decision to seek abortion care should be up to a woman, her doctor, and her family, and not politicians,” she said.

Davis strongly denied she was being facetious in her testimony that abortion has had a disparate impact on the African-American community.

“We are being targeted, and Planned Parenthood is behind that targeting,” she told Rep. Franks.

Rep. Franks said he was perplexed by Ms. Yeung's assertion that, in his words,“taking the life of an unborn child on the basis of race, that's not racism.”

But, he said in his opening statement, “when the subject is in any way related to abortion, the doors of reason” often close.

The bill's supporters say it is a commonsense measure dealing with a longstanding global human rights abuse that is opposed by members of both parties.

“In 2006, Congress passed a resolution condemning the People's Republic of China for its failure to end its one child policy and resultant sex-selection abortions,” said Chairman Bob Goodlatte, R-VA,  and one of the people who condemned China's practices was Hillary Clinton.

Rep. Franks said he hopes the bill will spark a debate about “the humanity of unborn children and the inhumanity of what is being done to them.”