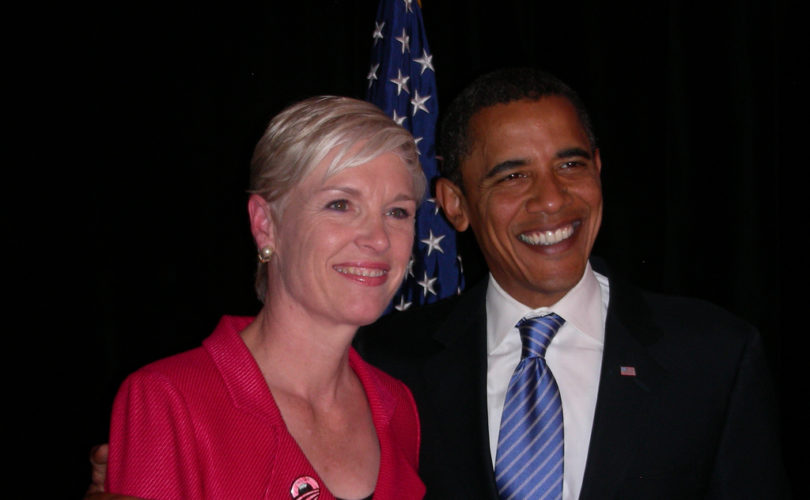 WASHINGTON, D.C., March 17, 2016 (LifeSiteNews) – Everybody needs a hero. Barack Obama believes young girls of the world should have two: the head of the nation's largest chain of abortion providers and a prominent Catholic politician who believes abortion is “sacred ground.”

His comments came after an introduction from Sana Amanat, a comic book creator and editor for Marvel Comics. Amanat, the daughter of Pakistani-born Muslim immigrants who settled in New Jersey, is known for creating “Ms. Marvel” (secret identity Kamala Khan), the first Muslim superhero.

“For a lot of young boys and girls, Sana is a real life superhero,” Obama said. “We’ve got a lot of them in this room.”

“I want to acknowledge a couple of them,” he said.

He then turned to introduce the CEO of Planned Parenthood in the place of honor.

“First of all, we’ve got Cecile Richards in the house, making sure women’s health care is on the front burner,” he said.

Although Planned Parenthood adeptly markets itself as a philanthropic organization dedicated to women's health care, Richards has testified that 41 percent of its revenue comes from abortion – a procedure the group performed 323,999 times in 2014.

Richards was caught in a very public lie last October when she admitted during Congressional testimony that Planned Parenthood does not perform mammograms, after having publicly stated that they do and allowing her spokespeople to repeat the assertion for years.

She “flat out lied when she claimed to have never said Planned Parenthood provided mammograms,” said pro-life Congresswoman Diane Black, R-TN, after the hearing.

Richards described her own abortion by saying, “It wasn't a difficult decision.”

When interviewer Jorge Ramos asked her at what point life began, Richards said she believed her three children's lives “began when I delivered them,” but defining the moment that human life begins is “not really relevant to the conversation” about abortion.

Pelosi, who describes herself as “an ardent, practicing Catholic,” has described abortion as “sacred ground” and regularly scores a 100 percent voting record from NARAL Pro-Choice America.

President Obama singled out two supporters of abortion-on-demand during Women's History Month despite the fact that an estimated 160 million “missing girls” were never born due to sex-selective abortion, something former President Jimmy Carter called “the worst human rights abuse on earth.”

If nothing else, the pair could serve as role models for young girls interested in upward mobility.

Nancy Pelosi has seen her average net worth increase by $37.9 million since she took office in 1986, according to an analysis performed by Ballotpedia, a neutral online encyclopedia of American politics.

The Center for Responsive Politics estimated Pelosi's total net worth in 2012 at $87.9 million.

FactCheck.org weighs in: Planned Parenthood does not perform mammograms