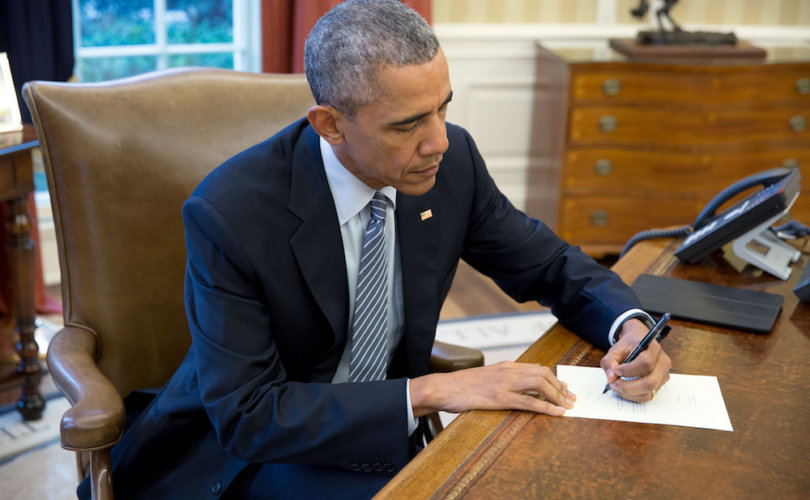 Obama wrote the encomium in the first paragraph of his statement, released on Friday.

“Regardless of sexual orientation, gender identity, or marital status, mothers have always moved our Nation forward and remained steadfast in their pursuit of a better and brighter future for their children,” Obama wrote.

In last year's proclamation, Obama hailed all mothers, “[w]hether married or single, LGBT or straight, biological, adoptive, or foster.” However, his usage appeared to highlight the mother's sexual orientation, not their underlying biology.

One pro-life leader said that conflating the two binary sexes in such a public way confuses children.

“Now the 'transgendered,' if they have children, can be celebrated twice a year as their children prefer to think of them as either 'mother,' or 'father,' or both,” said Samuel B. Casey, general counsel of the Law of Life Project. Such a classification, he said, is “confusing, but sufficiently inclusive to pass President Obama's evolving politically correct proclamation of motherhood in America.”

“With Obama, everything is political – employed to advance his perversely transformative agenda,” even Mother's Day.

“Perhaps the fact that Obama had a transgender nanny as a young boy in Indonesia (a gay transgender man named Evie) has something to do with Obama's outlook,” he wrote.

Obama wrote in the proclamation that “mothers – biological, foster, or adoptive – are our first role models and earliest motivators.”

As a young child, living with his mother and adoptive father in Indonesia, a biological male named Turdi acted as his nanny. However, Turdi identified as a woman named Evie.

Rudy Yara, who lived across the street from Obama’s childhood home, said Turdi “was a nice person and was always patient and caring in keeping young Barry.” The Associated Press reports, “Neighbors recalled that they often saw Evie leave the house in the evening fully made up and dressed in drag.”

For his part, the nanny contends, “I never let [Barack] see me wearing women’s clothes. But he did see me trying on his mother’s lipstick sometimes.”

“That used to really crack him up,” he said.

Transgender people make up at most 0.3 percent of the American population, according to the Williams Institute.

Obama's annual statement overlaps with efforts of the nation's leading abortion organizers to promote abortion-on-demand, as well as a new line of cards that celebrate transgender and illegal alien mothers.

The cards, produced by the left-wing group Strong Families, celebrate “Mama's Day” for sexual and gender identity minorities. “We see the trend of families defining themselves beyond the picket fence—across generation, race, gender, immigration status, and sexuality—as a powerful and promising development for the U.S., and we want to help policy makers catch up,” the group says.

On Twitter yesterday, the group's cards were promoted by both NARAL Pro-Choice America and Planned Parenthood.

Planned Parenthood drew outrage over a series of tweets, stating it is “committed to building a world that values…motherhood,” and “every person's right to become a mother, if and when they are ready.”

On its feed, NARAL also retweeted an article related to gender identity disorder, another article about post-abortive mothers who say they are happy with their decision, and produced a statement weaving abortion into the fiber of Mother's Day:

Barack Obama had a transgendered nanny in Indonesia