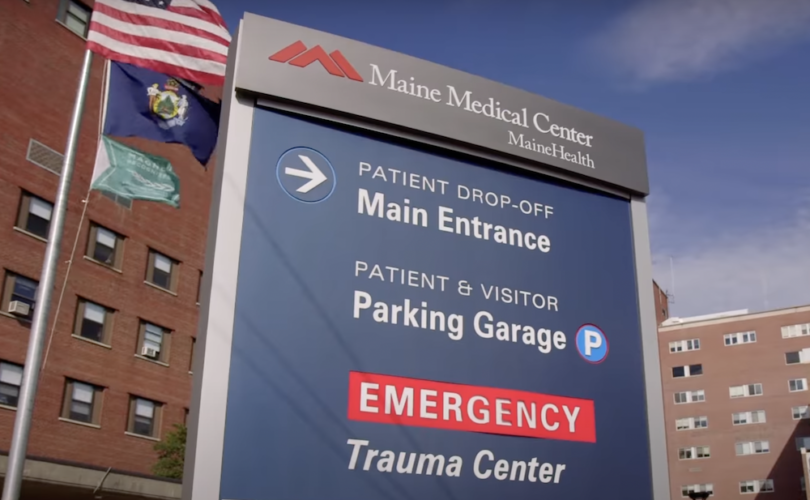 PORTLAND, Maine (LifeSiteNews) – A gender clinic at Barbara Bush Children’s Hospital offers a guide for “transgender” children instructing boys how to “tuck”  their genitals in order to appear “smoother and flatter” and teaching girls how to bind their chests to attempt to appear more masculine, as part of its so-called “gender affirming” services.

The “tucking” and chest binding guides were shared by the conservative Libs of Tik Tok Twitter account on Sunday in a thread highlighting the story of a then-9-year-old boy who socially “transitioned” to a “girl,” with the help of the Barbara Bush Children’s Hospital Gender Clinic, named after the now-deceased wife of former president George H. W. Bush.

Practices such as “tucking” and chest binding are increasingly being promoted in children’s gender clinics across the nation, including in a children’s hospital in Oregon, despite the potentially serious risks of both practices.

The McLean Clinic in Mississauga, Ontario, which specializes in “top surgery,” hosts an entire warning section on their website about the “health consequences of chest binding,” which include compressed or broken ribs, collapsed lungs, and back problems.

Tucking is not without risks, either, and these include “urinary trauma, infections, and testicular complaints,” according to Healthline, as well as the potential for “mechanical damage,” which creates the “potential for fertility issues.”

The Barbara Bush Children’s Hospital Gender Clinic makes no mention of these dangers of either tucking or breast binding.

The Maine Medical Center-based clinic cites guidance from the American Psychological Association (APA) in supporting its “gender affirmative” approach, by which it means accepting a child’s “gender identity” and “gender expression,” regardless of biological sex.

The center claims that attempting to help children conform their understanding of their gender to their actual sex is “harmful,” and adopts the APA stance that “Providers should aim to non-judgmentally accept the child’s gender presentation and help children … become more comfortable with themselves, without attempting to change or eliminate cross-gender behavior.”

The clinic’s services include menstrual suppression, puberty blockers, “gender affirming” hormone interventions, and a “mental health letter of referral” for transgender surgery, according to the clinic website, all for children “just before the onset of puberty.”

Prior to that age, the center offers “consultation” regarding a child’s gender identity that includes guidance and support for parents who wish to “socially transition” their child.

The APA guidelines cited by the clinic contrast the so-called “gender affirming” approach not only with one which discourages gender non-conforming behavior but with a “wait and see if these behaviors desist” approach.

While explicitly endorsing the “gender affirmative” approach, the APA is silent on the “wait and see if these behaviors desist” approach, raising the question of whether the APA, or any organization which endorses its guidelines, including the Barbara Bush Children’s Hospital Gender Clinic, rejects the latter approach even as an option.

The French Academy of Medicine, an independent but official medical society,  published a statement this year decrying the use of puberty blockers in children and teenagers, such as those prescribed by the Barbara Bush Children’s Hospital, and surgical interventions for young people seeking a gender “transition.”

LifeSiteNews reached out to the Gender Clinic at the Barbara Bush Children’s Hospital for details on its approach to gender-confused youth, but has not received a response as of publishing.