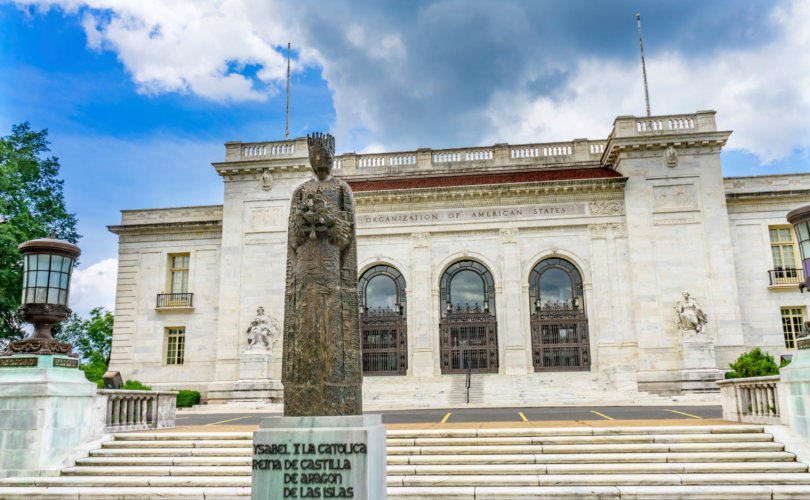 A statue of Queen Isabella stands in front of the Organization of American States headquarters in Washington, D.C. OAS, founded in 1948, represents the nations of the Americas. The statue was a gift from Spain in 1966.Shutterstock

June 23, 2020 (LifeSiteNews) – One of Spain’s most outspoken bishops preached on Sunday against the defacement or destruction of statues of Catholic heroes and saints in the present “Black Lives Matter” agitation in the United States.

Bishop Juan Antonio Reig Pla of Alcalá de Henares near Madrid said the attacks against Christian symbols marks “the return of the barbarians” and a great loss for all because only Jesus-Christ and the Catholic Church, which is His continuation, can give men the truth they need to follow to be truly free. His full sermon in Spanish can be watched here (read transcript of homily below).

Bishop Reig Pla spoke in particular of Isabella the Catholic, the Queen of Spain who commissioned Christopher Columbus to navigate to “India,” going West, and Junipero Serra, the canonized Spanish missionary of California.

He said that the present crisis is first and foremost a “crisis of the intelligence” and an “eclipse of truth” by which man no longer seeks what is true and no longer realizes his vocation to transcendence. Going a step further than Benedict XVI, the Spanish prelate said our time is not only that of “moral relativism” but of “nihilism.”

Reig Pla insisted that we must not be afraid of those who can only harm the body, because we must have the same destiny as Jesus Christ, who was persecuted and killed after an iniquitous trial but who defeated death; with Him, victory is certain.

Below is LifeSite’s transcript and translation of Bishop Reig Pla’s powerful homily.

The removal of the image of Isabella the Catholic from the Capitol in Washington, D.C., and the overturning of the statue of St. Junipero Serra means that the barbarians have returned. We cannot simply call these facts ignorance. It is possible that materially, those who did these things may be ignorant. But behind the ignorant, in truth, are the barbarians. And what the barbarians want is to put an end to Christian civilization. These are mere signs, symptoms, there are many more of them in the West. (…)

Today we need to listen to the prophetic voice of the Catholic Church, not only to denounce these facts, which would be something simply negative, but to give the content of what truly gives dignity to the human person from the beginning of his natural life until death: what gives meaning to his life to live with hope, and those realities which are essential to him as a human person. These have all been made explicit in Christ, who is the true man. It is He who reveals to man the mystery of man.

Therefore, to harm Christian reality by means of this Christianophobia is the worst thing that could happen to us.

That is why we must be attentive, and like the Prophet, take refuge in God and feel with Him freedom itself. (…) We are experiencing a profound crisis of truth. Deep down, it is a crisis of intelligence that does not dare to seek the truth. Yes, it seeks the practical truth. A bridge, if it is not well built, collapses, and therefore it must be built with every possible guarantee.

But then there is man, man and woman … There is no order for man as there are plans for buildings, bridges, trains and planes, because obviously these have no freedom. And the rest of us, why do we have freedom? To follow the truth.

If there is a crisis of truth, then freedom guides us. At the same time as the crisis of intelligence and the eclipse of truth, there is a perversion of freedom, because it does not know which path to follow. (…) It is as if there were an eclipse of the sun where we would all be in darkness, where there would only be opinions. “Where are we going?” we tell each other.

And this is what is happening in this jungle that is being formed, that exalts the individual to affirm his radical autonomy, to define himself even in his body and to break all the bonds that tradition has given him, starting with marriage, the family, Catholic tradition itself, love of one's land, love of the nation. All of this  is in a deep crisis.

Who will enlighten us? (…) Without light, freedom advances blindly, and you know what it is then reduced to: to the instincts of each person, to affects and emotions. And so in this technological and consumerist world, people's intelligence is constantly shrinking, reducing them to being mere consumers. This is the world we have before us, and – I insist – we need the prophetic voice.

(…) At the same time as the crisis, the eclipse of truth and of intelligence, together with the perversion of freedom, comes what is even worse: the darkness of moral conscience. This is what we call, not only as did Benedict XVI, moral relativism, but nihilism. So what does nihilism mean? Moral conscience is in the dark; it cannot distinguish between good and evil. When we ask it: Where are you going? It says: I'm not going anywhere, but I'm happy. I am simply conforming to the ordinary realities of each day.

Remember all the time we spent in our homes; think of the good that could have come out of it, and I pray that it will. But who truly triumphs today? It's the big multinationals, it's Twitter, Facebook, Netflix: all things purely virtual – they've done big business. And what's left of the person? What is left of the reality of one's own identity as a person? What remains of people's original and compelling vocation to love? What remains of the greatness of marriage and the social good of the family? What remains of what it means to build social peace in justice so that we grow as a nation? I do not know. But we must at least ask the question.

What important factor can regenerate this situation? I don't know any other than Jesus Christ. Jesus Christ is the truth, He is the way, He is life. And when I say Jesus Christ, I am talking about Jesus Christ living in us and therefore continuing in His disciples. The Church is the discipleship of Jesus Christ.

(…) In His Apostolic Discourse Jesus vested the Apostles with authority. He gave them power over spirits and over demons. He said to them: I send you as lambs among the wolves, but now you must proclaim what I have taught you, whether in private or publicly, for there is nothing secret that shall not be revealed: what I have told you in secret, in private, you must proclaim from the rooftops. This means: this is the mission of the Church, to tell from every possible platform the truth of Jesus Christ that makes man grow, that makes him be considered personally in his bonds of communion, giving meaning to human life with the vocation to love, establishing the solid foundation of families and from there, the social good, in justice and fraternity. This is the voice of the Church which must not fail us. Having said that, Jesus adds: do not be afraid of men. And He repeats: do not be afraid.

What does this mean? That He is giving them some kind of psychological support? No, Jesus does not do that at all. He says to them: your destiny is mine. And what is my destiny? I have been persecuted, I have been judged in an iniquitous judgment, and I have been condemned. I was led to death and I was buried. But do not be afraid, for I overcame sin and the consequence of sin which is death. I have conquered the world. And therefore, do not be afraid, and do not be afraid of those who may simply harm your body.

Today, physical violence continues, but there is a more insidious violence, which consists in condemning the prophet to civil death. This is ridiculing his message. It is making it commonplace. And that is what the constant means of communication are doing to all those who dare to break with political correctness. Political correctness is what is peculiar to the things that are happening not only in the United States but also here in Spain: this may be the return of the barbarians.

That is why we need the prophetic voice, and why we need to lose fear. To lose fear, Jesus insists on it twice, we must realize that in Jesus there is the beginning of something totally new: He has come to re-create this situation that was a situation of death. We had no way out, we were condemned to death, and He initiated with His word and His testimony of extreme love towards us a reality that I call the new creation, the New Genesis. This is why the Church cannot remain silent. We cannot confine the Church. We cannot silence the voice of the prophets. And when we speak of the prophets in the plural, in fact we are referring to Jesus Christ who redeems the hearts of men. That is the most compassionate element, the one that gives the greatest consolation. He who does not know Jesus does not know himself. He who does not know the compassion and mercy of God is called to live in despair like so many people who even today do not know where to look or where to direct their steps…

Towards the Christian civilization which built the West and which is called to cry out from every rooftop and in every square of the world, because this is the Lord's will and the burden he has left us.

The last word of the Gospel is wonderful: He who defends me before men, I will defend him before God my father. He who denies me … it is a call to our responsibility. Today, we do not only need the voice of pastors, we need the voice of all, and especially the voice of lay Christians, so that everywhere with their personal responsibility, in the family circle or that of the company, of work, and in social life, trade unions, human institutions, politics, the voice of the Catholic must be present to offer, not to impose on anyone, the treasure that we have received. If Jesus and only He has given us the power to expel demons, who are the fathers of lies, it is so that the person can be reborn to hope, and he has assured us an eternal destiny, that is to say, the most serious thing in human life. “Who defends me before men:” this must be our will.

I started by mentioning Isabella the Catholic. Isabella the Catholic is not a saint, I don't know why. It's because of the complex of Spain, the decadence of our people: the holiness of this woman is more than established. Let us say nothing of Brother Junipero Serra … Holiness is the splendid light of heaven that comes to us to illuminate us like lamps that light up in the face of the darkness of civilizations, which have walked in darkness because they have not known him who is the Sun of Justice, Jesus Christ.