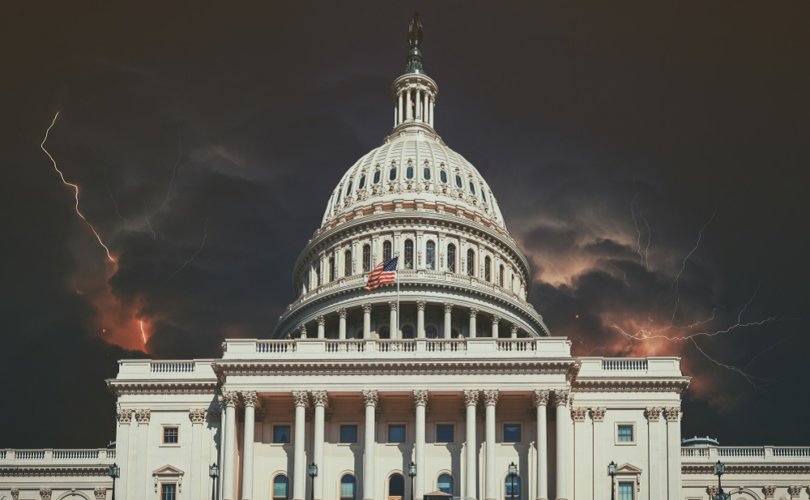 WASHINGTON, D.C., February 25, 2020 (LifeSiteNews) — Calling it a “very sad day for the unborn,” pro-life leaders lamented the failure of a moderate late-term abortion ban and an anti-infanticide measure in the U.S. Senate today.

Abortion activists were tepid in their responses but tried to claim thtat the bills were addressing “a problem that doesn’t exist” and attempted to shift focus to Virginia, where the Democrat majority is about to repeal its mild pro-life laws.

The Senate voted 53-44 for the Pain-Capable Unborn Child Protection Act, which would stop most late-term abortions, and 56-41 for the Born-Alive Abortion Survivors Protection Act. Both needed 60 votes in order to pass. The latter would have required abortionists to transfer infants who survive abortions to hospitals, where they would be given the same degree of care as any wanted newborn.

“It is a very sad day for the unborn, and I pray God’s forgiveness over our country,” said Penny Nance, president and CEO of Concerned Women for America. “Planned Parenthood and abortion extremists’ death grip have once again prevailed through the Democrat party. Today they voted to turn their backs to protect babies who feel pain or are born alive from a failed abortion.”

“It is unconscionable that Democrats stand on the side of authoritarian regimes like China and North Korea who condone the killing of unborn children until birth and leave unwanted newborns to die,” she continued. “Unfortunately, that is where our country’s laws stand today.”

“Refusing to support a measure that would provide life-saving care to an infant who survives an abortion and is born-alive is condoning infanticide. Continuing to allow this practice of either actively or passively allowing born-alive babies to die as Virginia Governor Northam has advocated is crossing the line from civilized to barbarous,” commented Tony Perkins, president of the Family Research Council. “The efforts in Congress to protect these babies should not stop, and voters have a moral duty to vote against those who condone infanticide.”

Marjorie Dannenfelser, president of the Susan B. Anthony (SBA) List, warned that Democrats “will pay for their abortion extremism at the ballot box this November.”

SBA List’s national campaign chair Jill Stanek, a former nurse, added, “I witnessed firsthand babies being born alive and left to die. Doctors and nurses who treat babies in utero and those born extremely premature see these children as a second patient, administering anesthesia for surgery, and constantly developing newer and more effective ways to care for the tiniest humans.”

“It is appalling to see Democrats move in the opposite direction and vote against compassionate, commonsense bills, including one that simply requires medical care for born children,” added Stanek, who recently testified before the Senate Judiciary Committee.

Democrats in DC can be nervous about Bernie Sanders all they want–but every day they show they’re just as extreme.

Today, 41 Senate Dems voted to block legislation that would ensure a baby received medical care if he/she survives an abortion. House Dems have blocked it 80+ times

The National Abortion Federation retweeted a post calling both bills “dangerous abortion bans” but as of press time had not issued an official statement on them, instead sending out a press release about its hiring of a former ACLU lawyer.

The bills requiring that newborns be given medical care and stopping some late-term abortions are “cruel and deceptive attacks on our reproductive freedom,” said Ilyse Hogue, president of NARAL Pro-Choice America. She called them a “smokescreen to distract from the anti-choice movement’s deeply unpopular agenda to ban abortion and punish women.”

“But there is good news: Amid these attacks, state legislators in Virginia are on the brink of a final vote on the Reproductive Health Protection Act (RHPA),” NARAL insisted. Governor Ralph Northam, who last year defended infanticide, is expected to sign that bill into law. Both chambers of the Virginia legislature are controlled by Democrats.

Democrat 2020 hopeful and Massachusetts senator Elizabeth Warren posted to Twitter a video of a speech she delivered against the 20-week ban in 2018, during which she seemingly acknowledged the humanity of the people killed by abortion. She suggested that for some women, late-term abortion is a “wrenching decision after learning that the child they’re carrying won’t survive childbirth.” She did not further elaborate on why she supports killing such a “child.”

We’ve got some serious problems that the Senate should be tackling. Student debt. Opioids. Gun violence. Climate change. Instead, the @SenateGOP has decided to vote once again on a radical & restrictive 20-week abortion ban bill. pic.twitter.com/rDR8VmYkuF

Planned Parenthood acting president Alexis McGill Johnson tweeted, “The politicians behind this bill are making up a problem that doesn’t exist.”

The politicians behind this bill are making up a problem that doesn’t exist. https://t.co/TgvbU9nmAd

Data from the Centers for Disease Control indicate that from 2003 to 2014, at least 143 infants died after being born alive during an abortion, while admitting that this is almost certainly an underestimate.

“The only silver lining” of today’s votes “is that every senator and member of the House is now on record for whether they support medical care for babies born during abortions and for what protection they would offer preborn infants at [five] months of pregnancy and beyond,” said Students for Life of America’s Kristan Hawkins. “These votes matter, but that doesn’t change the fact that this is a tragic day.”

Senate majority leader Mitch McConnell filed for cloture on both bills last week, beginning a formal debate period and setting the stage for today’s cloture vote to end debate, which would then theoretically be followed by a vote on whether to pass them as required by the U.S. Constitution.

The outcome was a foregone conclusion, however. Even though the Senate currently has majority support for both bills, GOP-backed Senate filibuster rules require most standalone bills to first attain 60 votes to end debate and move on to the final simple-majority vote. Democrats are expected to abolish the rules requiring 60 votes when they next gain power.