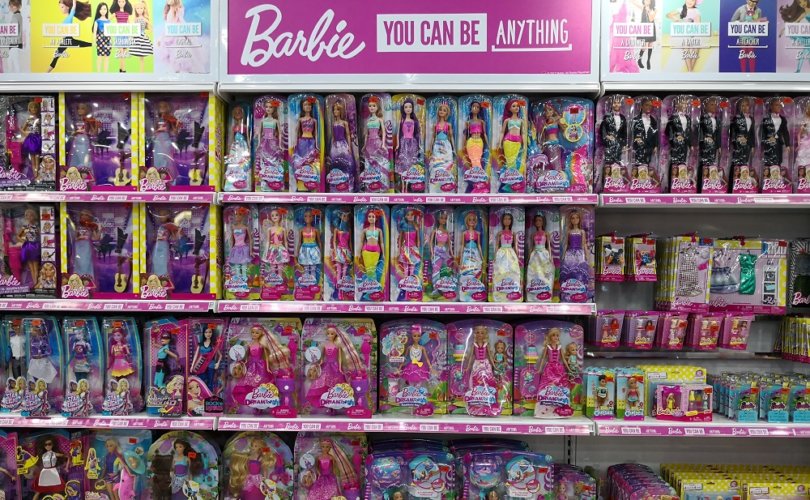 EL SEGUNDO, California, October 1, 2019 (LifeSiteNews) — Mattel, the California toy company that created Barbie and Ken, has launched a line of “gender-inclusive” dolls in a move Time described as an “overt nod to trans and non-binary identities.”

The six androgynous dolls in the “Creatable World” line come in various skin shades, long and short hair options, and “six items of clothing, three pairs of shoes and two accessories that are both male- and female-presenting,” reported the Huffington Post. Each doll kit retails at $29.99.

“Toys are a reflection of culture and as the world continues to celebrate the positive impact of inclusivity, we felt it was time to create a doll line free of labels,” senior vice president of Mattel fashion doll design Kim Culmone explained in a statement on the line’s launch.

“Through research, we heard that kids don’t want their toys dictated by gender norms,” she said. “This line allows all kids to express themselves freely, which is why it resonates so strongly with them.”

But some with such identities say the dolls don’t go far enough.

“I really worry that the cultural concept of nonbinary is this singular third androgynous gender, which is what this doll is portraying,” Molly Woodstock, a “gender educator” and co-host of the podcast Gender Reveal, told National Public Radio.

“That’s not the reality of a lot of nonbinary people. We can’t be liberated from the gender binary if we’re just making it a gender ternary,” said Woodstock, who has identified as “nonbinary” for three years.

Samantha, the pseudonym for a woman who runs a “sex-positive” blog, faulted Mattel’s gender-neutral dolls as limited by society’s current understanding of gender, such as long hair for women.

“There’s a question of how we should visually represent these super complex topics,” she told Well+Good.

“Mattel took symbols that we currently understand and simplified them, which raises the question: What would non-binary gender look like without just resorting to short hair, long hair, ‘boy clothes,’ ‘girl clothes’?”

Mattel “tested the doll with 250 families across seven states, including 15 children who identify as trans, gender-nonbinary or gender-fluid and rarely see themselves reflected in the media, let alone their playthings,” reported Time, quoting Monica Dreger, head of consumer insights at Mattel.

“There were a couple of gender-creative kids who told us that they dreaded Christmas Day because they knew whatever they got under the Christmas tree, it wasn’t made for them,” Dreger said.

Time also reported that the number of youngsters identifying as “gender-nonbinary” is growing.

“Though no large surveys have been done of kids younger than 10, a recent study by the Williams Institute at the University of California, Los Angeles, found that 27 per cent of California teens identify as gender-nonconforming,” it stated.

“In our world, dolls are as limitless as the kids who play with them,” Mattel tweeted:

In our world, dolls are as limitless as the kids who play with them. Introducing #CreatableWorld, a doll line designed to keep labels out and invite everyone in. #AllWelcome

Laura A. Jacobs, “a trans and gender-queer identified therapist specializing in LGBTQ issues,” told Well+Good that the gender-neutral dolls “validate” the experience of “gender fluid” children.

“Whereas beforehand, when we just had very heteronormative Barbies and Kens, a lot of people really felt like they were left out of that,” she said.

Mattel’s gender-neutral dolls are “the latest sign that toys and media aimed at kids are expanding to reflect how diverse children and their families actually are,” GLAAD President and CEO Sarah Kate Ellis told Huffington Post.

I'm a non-binary doll
In a binary world
I am plastic
It's fantastic
You can brush my hair
Please use the pronoun “their”
Imagination, life is your creation

Mattel launched the gender-neutral doll line a day after French toymakers “signed a pact” with the government to strip all “gender stereotypes” from their wares. A French minister had blamed games and toys for keeping women out of math and science careers, the Guardian reported.

The French Federation of Toy and Childcare Industries (FJP), the association of toy-manufacturers, and the government signed a charter for a “balanced representation (of genders) in toys,” last week, according to the Guardian.