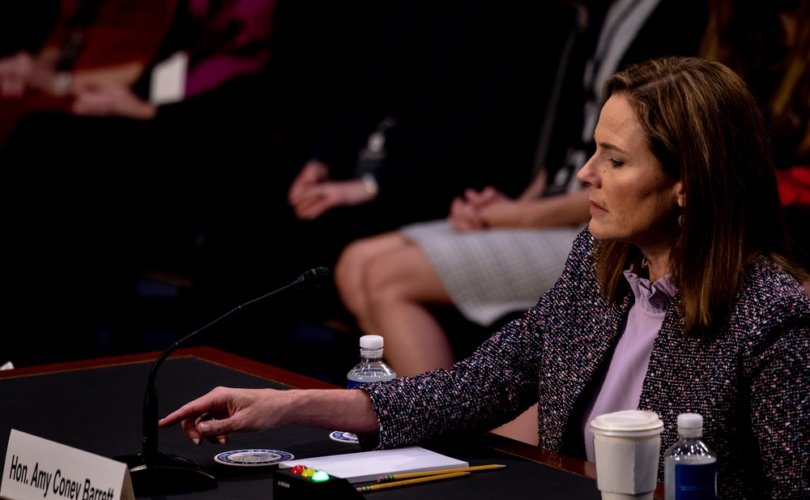 Barrett responded, “That might be a question that could be litigated. Polygamy obviously in many places is illegal now, but that could be an issue somebody might litigate before the court at some point.”

“Somebody might make the argument that it’s possible for three people to love each other genuinely and that would work its way to the court if somebody wanted to make that argument, is that correct?” Graham continued.

“Somebody could, yeah, make that argument,” responded Barrett.

Barrett has repeatedly stated during her confirmation hearings that it is inappropriate for her to express her views about any previous case, or comment on the constitutionality of any case that may be litigated by the Supreme Court in the future.

Yesterday, Senator Maize Hirono (D-HI) criticized Barrett for her use of the term “sexual preference.” Hirono complained, “Sexual preference is an offensive and outdated term used by anti-LGBTQ activists to suggest that sexual orientation is a choice.”

Citing judicial opinions of Justice Scalia, whose judicial philosophy Barrett has said she shares, Hirono said that many same-sex couples “are rightly afraid” that if Barrett is confirmed, she will help “roll back everything the LGBTQ community has gained over the past two decades.”

Barrett later replied, “I certainly didn’t mean and would never mean to use a term that would cause any offense in the LBTQ community,” Barrett said. “If I did, I greatly apologize for that. I simply meant to be referring to Obergefell's holding with regard to same-sex marriage.”

Barrett also reiterated the reason she abstained from expressing her views on Obergefell v. Hodges, the decision that imposed same-sex “marriage” on the country in 2015. “I was certainly not indicating disagreement with it. The point of now answering was to simply say it was inappropriate for me to say a response,” she said.

Regarding the question of whether polygamy might be litigated before the Supreme Court, it is notable that polygamy is significantly more accepted today than it was 14 years ago. A Gallup poll released June 23, 2020 found that a full one–fifth (20 percent) of Americans find polygamy admissible, whereas in 2006, only five percent of Americans did.