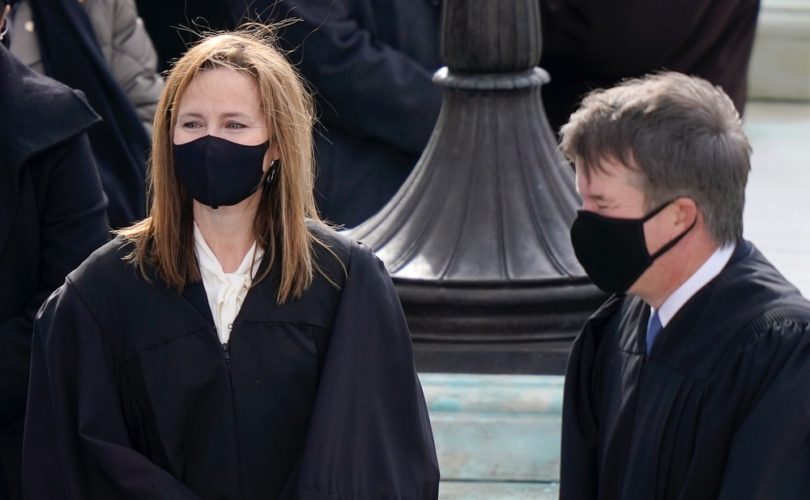 In 2019, Trump instituted the Protect Life rule, which required “clear financial and physical separation between Title X-funded projects and programs or facilities where abortion is a method of family planning,” and banned “referral for abortion as a method of family planning.” It was projected to cut almost $60 million from the $616 million Planned Parenthood received during the most recent fiscal year.

A three-judge panel of the 9th Circuit lifted a temporary injunction against enforcing the rule that June, and the full court affirmed that decision in February 2020, predicting that lawsuits brought in California, Oregon, and Washington “will not succeed” on the merits. Last May, the 9th Circuit denied the abortion lobby’s request to have its February judgment reconsidered by a different 11-judge panel or by all 29 judges on the court, with a different ruling against the administration, from the 4th Circuit Court of Appeals, keeping the Protect Life Rule from being enforced within Maryland.

The Biden administration subsequently asked the Supreme Court to dismiss the cases as moot, claiming it will continue to enforce the rule until it is superseded by President Joe Biden’s own proposed rule to restore Title X money to abortionists.

The Supreme Court’s May 17 order list announcing the cases’ dismissal notes that only Justices Clarence Thomas, Samuel Alito, and Neil Gorsuch would have denied dismissal of the cases, meaning that Justices Barrett and Kavanaugh either did not vote or joined the Court’s liberals in voting with Biden. Only four justices are necessary for the Supreme Court to take up a case.

Several pro-abortion groups, including Planned Parenthood, the American Civil Liberties Union (ACLU), and the American Medical Association (AMA), reacted with a joint statement celebrating the decision as a victory for abortion funding.

“Today’s dismissal of the Supreme Court Title X cases marks another important step forward for patients across the country who have been denied access to essential care during a pandemic,” they claimed. “We are pleased that all parties, including the federal government, agreed that the litigation over the Trump administration’s ‘gag rule’ is no longer necessary. As the comment period on its proposed regulations comes to a close today, we look forward to the Biden administration’s continued prompt action to undo this dangerous and discriminatory rule.”

The dismissal does not itself establish new pro-abortion precedent or invalidate previous pro-life decisions, but it does reject an opportunity to settle the matter and effectively defers to the Biden administration’s judgment. It also introduces a potentially alarming new data point to those trying to predict how the justices will rule in their upcoming case about Mississippi’s 15-week abortion ban, which could present an opportunity to review Roe v. Wade.

Regardless, LifeSiteNews is currently running a 50-state Voter Voice campaign against reopening Title X to abortion providers, through which readers can easily submit comments both to federal HHS regulators and their elected representatives in Congress simply by clicking here.