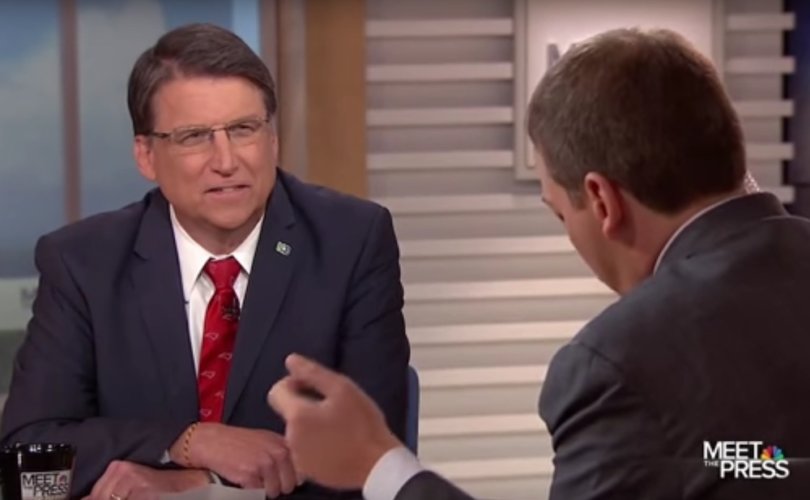 WASHINGTON, D.C., April 18, 2016 (LifeSiteNews) – The national debate over allowing biological men to use women's, and girl's, showers and locker rooms – which pits Wall Street and Hollywood against much of the nation's heartland – perfectly illustrates the disconnect between “corporate suites and Main Street,” North Carolina Governor Pat McCrory said on Sunday.

Gov. McCrory said the debate, which has engulfed his state in a fierce controversy, involves an “extremely new social norm that has come to our nation at a very quick period of time.” He hoped by signing H.B. 2, which restricts intimate changing areas to members of the same biological sex, would guarantee citizens “privacy in the most private of areas of our life, which is a restroom, locker room, or shower facility in our high schools” and middle schools.

The people get that, he said.

After walking into an “African-American buffet restaurant” in Hamlet, North Carolina, he said, “the people just welcomed me with open arms and said, 'Thanks for protecting us.'”

“I got back in my car, and I got a call from someone in corporate America going, 'Man, you've got to change this. We're getting killed,'” he said.

“It showed me the disconnect we have between the corporate suites and Main Street on a very complex subject, and a very personal subject,” Gov. McCrory told Chuck Todd on “Meet the Press” this Sunday.

That rift has had high stakes for North Carolina, as a coalition of more than 160 businesses – recently joined by financial titans Bloomberg and Capital One – would impose a fiscal cost on the states of at least $39.7 million in lost revenues, according to Todd.

Actor George Clooney, who was also on the show, said he found the corporate pressure “to be really effective, because these are big corporations that are protesting. And when you have IBM and Walmart of all people and General Electric and people like that coming at you, it affects people.”

He credited that with convincing Republican governors like Mike Pence of Indiana to back down from signing religious liberty laws favored by state legislatures.

Gov. McCrory took pains to distinguish this bill, which deals only with restroom privacy, with more expansive bills that allow people with deeply held religious beliefs to opt-out of participating in same-sex ceremonies.

McCrory, a Republican, noted that he had “called out my own Republican legislature in the past, with magistrates” who sought an accommodation not to perform same-sex “weddings.”

Last June, state legislators overrode Gov. McCrory's veto of a bill granting magistrates the ability to refuse to perform same-sex “marriages” if they had a sincerely held religious objection, but they would then be barred from performing any wedding for six months.

Gov. McCrory said that the city of Charlotte went too far by decreeing a restroom policy for all businesses within the city limits.

That distinction did not keep cities around the nation from lumping him together with the state of Mississippi, where Gov. Phil Bryant just signed a religious freedom bill, as targets of scorn.

Over the weekend, officials in Los Angeles said they would refuse to do business with North Carolina, or Mississippi, over their respective laws.

The cities of Providence, Rhode Island, and Columbus, Ohio joined the travel ban on non-essential personnel to both locations, an essentially symbolic boycott intended to express discontent. “North Carolina’s HB2 serves no purpose other than to encourage hate and exclusion for members of the LGBTQ community,” said Columbus Mayor Andrew J. Ginther. “We must work together in doing our part to overturn this legislation.”

Some of the outrage has come from his fellow Republicans. Columnist Kathleen Parker said later in the panel that the transgender bathroom issue is “such a bogus issue altogether. I don't know what they're afraid of, you know?”

She said she regularly heard objections that men would “be able to come into bathrooms and assault 10-year-old girls.”

“They're being fed some kind of crazy, false narrative about what this is,” she said.

However, at a rally last Monday the Benham brothers, who are North Carolina natives, recited a litany of recent assaults in which men posed as transgender “women” to gain access to female victims in sex-segregated settings.