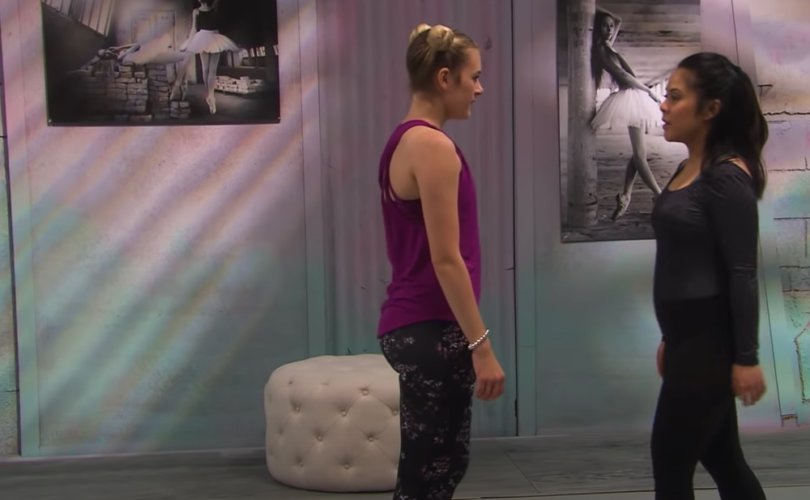 UNITED KINGDOM, July 28, 2020 (LifeSiteNews) – The BBC, the publicly funded British TV and radio institution, has aired a kiss between two teenage girls in a program aimed at young children.

“The Next Step,” a Canadian-produced teen drama series following the stories of aspiring young dancers, featured a kiss between teen actresses Dani Verayo and Molly Sanders in a show aired last week.

The show was broadcast via the CBBC brand, which the BBC says is for children ages six to 15 years old.

Mainstream media reports have praised the scene as a “hopeful sign of breaking down even more barriers in television.”

A BBC spokesperson told The Metro that “CBBC is proud to reflect all areas of children’s lives, including age appropriate representation of same sex relationships, across our factual and fictional output.”

U.K. newspaper The Mirror said that “BBC producers have been working to serve the LGBTQ+ community and provide representation in their shows.”

In 2018, the BBC said that it wanted LGBT characters to be seen twice as much on TV as they are in real life within the next two years.

The teenage lesbian kiss scene was also praised by Stonewall, a U.K. LGBT activist group roughly equivalent to the Human Rights Campaign in the United States. Stonewall encourages British primary schools to embed gay, lesbian, and transgender themes and examples into every subject area and every grade level.

Eloise Stonborough, Head of Policy and Research at Stonewall, described the scene as “an exciting moment for LGBT representation” and said that such “[r]epresentation can help young LGBT people understand themselves by relating to lesbian, gay, bi and trans characters, and improves understanding of what it means to be lesbian, gay, bi or trans, which helps everyone to be more accepting.”

The BBC is funded by the British public, with everyone under the age of 75 who either watches live television or views or downloads BBC programs online required to purchase a “TV license” for £157.50 per year, with fines of up to £1,000 for those who fail to pay the license fee. The fee is set by the U.K. government, and those who watch TV without a license can face imprisonment if they refuse to pay their fines.

In recent years there have been increasing calls from the British public to defund the BBC, with many arguing that the government-imposed license system which financially props up the organization is outdated. In recent years the BBC has also faced increasing criticism for what many perceive to be a liberal bias in its reporting, and for the size of the salaries of its top earners.