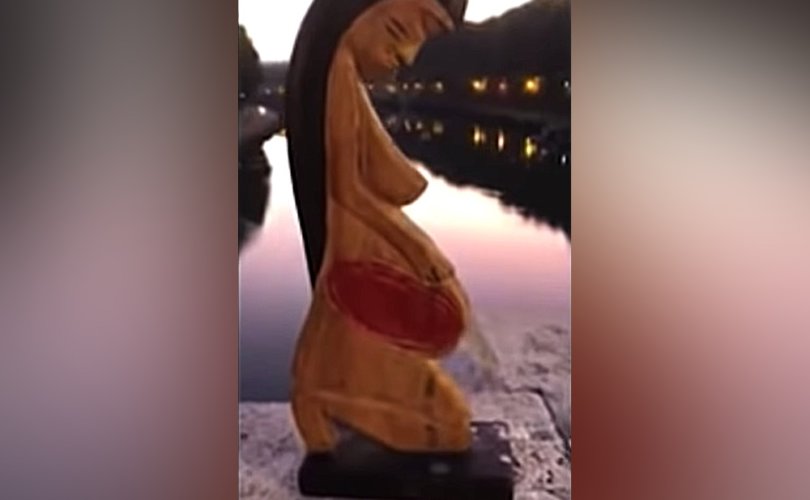 LONDON, England, November 1, 2019 (LifeSiteNews) – A former editor of the left-wing Catholic periodical The Tablet told BBC listeners today that the Pachamama statues thrown into the Tiber last month during the Amazon Synod represented the Blessed Virgin Mary, despite Pope Francis explicitly calling them “Pachamama statues” last week while apologizing for their removal.

On a “Thought for the Day” segment broadcast this morning, Catherine Pepinster, 60, said that a statue “of the Mother of God” had “caused a furor in Rome recently”.

“This was an indigenous Amazon figure,” she said, “naked, with a fetus inside, used in church services during the meeting on the Amazon held by the pope.”

Pepinster said that “horrified traditionalists threw it in the River Tiber, claiming it was idolatrous.”

She made a connection between this action and the nation-wide vandalism of Christian churches during “the Puritan era to justify the smashing of biblical figures and saints.”

“But as the events surrounding the statues in Rome indicate, statues are not necessarily about religious rows but about expressing the identity and the traditions of a community.”

The Vatican denied on more than one occasion that the crudely carved figures represented the Mother of God. The figures were identified by the Holy See’s Dicastery for Communication variously as images of fertility, womanhood, motherhood, and the Amazon region itself. They were, however, described as “pachamamas” by Pope Francis when he told Synod Fathers that the images had been taken out of the Tiber by the police.

Pachamama is a pagan goddess of fertility worshipped in pre-Christian times in western South America. Christians, including Catholics, were shocked when video footage of people from the Amazon region prostrating themselves before the naked images in the presence of Pope Francis was released.

One English Catholic journalist, representing Commonweal magazine, attempted to defend the ritual by arguing that the identical images of naked pregnant women depicted the Blessed Virgin Mary and St. Elizabeth.

Pepinster, who now works for the Church of England, said she would be going to Westminster Abbey for a special service. She noted that the niches at the front of the now-Anglican church that once held Catholic saints are now filled by statues of modern-day Christian martyrs and figures who reflect the values of the nation.

Pepinster made the remarks after related a story about the return of a statue of the Blessed Virgin Mary to an Argentinian military chaplain by a British Catholic military chaplain in the presence of Pope Francis.