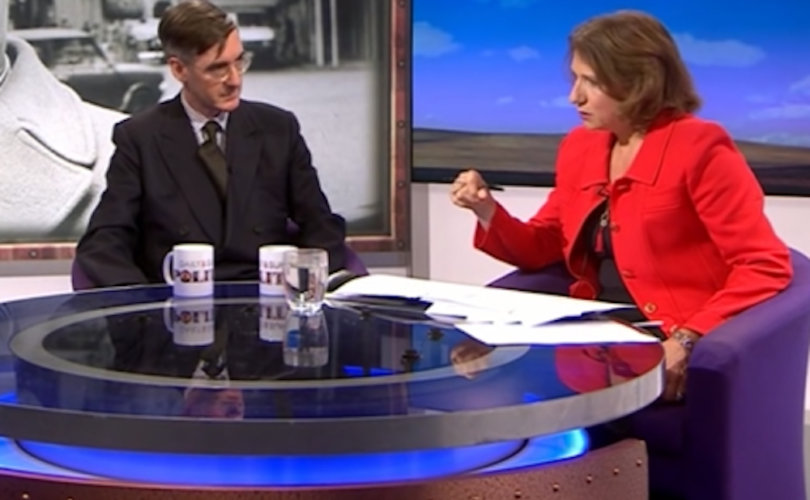 UNITED KINGDOM, May 23, 2018 (LifeSiteNews) — The BBC is coming under fire after a journalist suggested a Conservative Member of Parliament’s Catholic belief in marriage presented a “problem” for holding his office.

During a recent interview, Jo Coburn asked if Conservative MP Jacob Rees-Mogg could support Scottish Conservative leader Ruth Davidson, who is pregnant and engaged to another woman, for future leadership positions. Rees-Mogg said he had no problem “at all” with Davidson’s personal life and that it was “wonderful” that she was expecting a child, but he said that any endorsement for a hypothetical future vacancy would be premature.

However, when Rees-Mogg added that as a Catholic he could not support her same-sex “marriage,” Coburn suggested he was the one whose lifestyle disqualified him from a political career.

“Can you see that that is a problem for many people if you’re going to be a senior politician,” she asked, “that you hold those views about some of your colleagues who want to be married and are gay?”

Rees-Mogg responded that he “make(s) no criticism of any of my colleagues, but do you believe in religious tolerance?” Coburn answered that she did, to which the MP asked, “Why do you pick on the views of the Catholic Church?”

Coburn rephrased her critique as “there are people who might have a problem with it,” but Rees-Mogg summarized her contention as “tolerance only goes so far and you should not be tolerant of the teaching of the Catholic Church.”

“So isn’t this stretching into religious bigotry?” he asked.

“It is really important to get to the heart of this because this country believes in religious tolerance. We are a very tolerant nation,” Rees-Mogg declared. “And the act of tolerance is to tolerate things you do not agree with not just ones you do agree with and the problem with liberal tolerance is it has got to the point of only tolerating what it likes.”

Coburn again attempted to distance herself from her original question, suggesting she was raising a question from the MP’s “colleagues” rather than herself. But he remained defiant.

“The Catholic Church, of great antiquity, has taught these things,” he said. “And it is absolutely legitimate that Catholics in public life, in private life, believe and accept the teaching of the Catholic Church, as it is for Muslims to believe the teachings of Islam, and likewise for Anglicans, and also for agnostics and atheists.”

Rees-Mogg said simply that it would be up to voters to decide for themselves whether religious beliefs are a barrier to office, “but what’s important is that I should be honest with voters about my views and make no bones about the fact that I am a practicing Catholic.”

As for whether he would like to change the country’s laws on same-sex “marriage” and abortion, Rees-Mogg said government ultimately had to follow society’s lead.

“I think it is a deep, deep sadness that there were 190,000 abortions in this country in 2016. I think it is one of the great tragedies of the modern world, and I think it would be a wonderful thing if society came to a different view on abortion,” he said. However, “I don’t see that happening, and I don’t think changing the law, when society overwhelmingly thinks something different, is going to achieve it.”

After the segment, Bishop Mark Davies of Shrewsbury denounced the BBC for “hounding” Rees-Mogg over his faith. “It is hard to see this treatment of Catholic politicians as being other than a new bigotry.”

Bishop John Keenan of Paisley agreed, calling out Coburn for attempting to “hide” her “secular bigotry” behind “the old red-herrings of ‘other people say.’”

“In short, that Catholics like Rees-Mogg simply can’t be Prime Minister because it’s just not British in this day and age,” Keenan continued, and the Conservative MP was correct to “point out that this aggressive secularism has nothing liberal about it.”

This is not the first time Catholics have faulted the BBC for anti-Catholic bias. Last month, Keenan denounced it for a social media video mocking Holy Communion, saying the Host “tastes like cardboard” and “smells like hate.”

“It is ridiculing and demeaning the faith of ordinary Catholics, especially at a time when Catholics are experiencing more and more abuse and prejudice in Scotland,” the bishop explained at the time. “You cannot imagine it treating any other religion like this.”