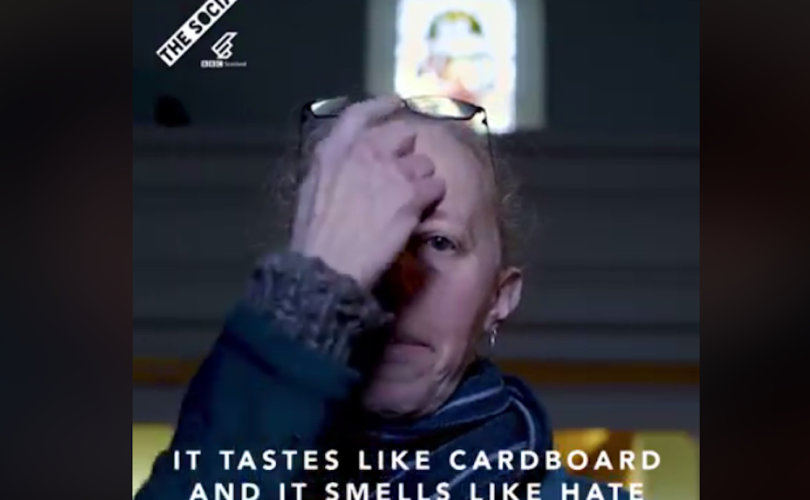 BBC The Social, a social media outlet aimed at young adults managed by BBC Scotland, posted a video titled “Time for Love” on April 9 on Facebook and YouTube.

The video dramatizes a young man’s response to his feeling restrained from kissing his male partner in a public park because of others’ views on same-sex relationships. It gives an unflattering portrayal of those in the park who react negatively toward the couple. The Facebook post introducing the video stated, “This is how homophobia feels in 2018.”

The video depicts a parody of the Eucharist at one point, with a priest elevating a cheese cracker.

“Because it seems to me like Jesus saved a lot of time when he died for all our crimes that he would have wasted teaching small minds that love is no sin,” the narrator says.

“See him, he thinks it’s faith,” the young man continues, referring to a zealous street preacher he calls a “Bible basher rehashing lies about Jesus.”

The video then jumps back to the priest subsequently placing the cracker on the tongue of a kneeling woman, who then performs the sign of the cross.

“But under all that din,” the narrator continues during the scene, “it tastes like cardboard, and it smells like hate.”

LifeSiteNews sent the BBC an inquiry about the video.

Bishop John Keenan of Paisley, Scotland, said the video was “offensive to Catholics in both the words and images used.”

While there is always room for debate, the video is “not fair comment,” the bishop said in a Catholic Herald report.

The archdiocese posted a statement on its Facebook page April 13 as well, which quoted the Catechism of the Catholic Church regarding homosexuality:

“They (homosexual persons) must be accepted with respect, compassion, and sensitivity. Every sign of unjust discrimination in their regard should be avoided,” adding that, “homosexual persons are called to chastity. By the virtues of self-mastery that teach them inner freedom, at times by the support of disinterested friendship, by prayer and sacramental grace, they can and should gradually and resolutely approach Christian perfection.” (Catechism of the Catholic Church 2358-9)

The archdiocese referred readers to the Courage apostolate, a Church resource for individuals with same-sex attraction, including pastoral support for them and their families.

“So BBC Scotland has described Holy Communion and Catholics in its latest digital stream for young people in Scotland on homophobia,” Bishop Keenan said in another April 13 Facebook post describing specifics of the video. “The priest holds up a Mini-Cheddar in parody of the Host for a Catholic parishioner to receive.”

He continued, “All this in a week when a Sunday Times poll found 20 perecent of Catholics reported personally experiencing abuse or prejudice towards their faith and recent government figures on religiously aggravated crime showed 57 percent of it is now directed at Catholics, an increase of 14 percent … and we all wonder why!!!”

“It is ridiculing and demeaning the faith of ordinary Catholics,” Bishop Keenan told the Catholic Herald, “especially at a time when Catholics are experiencing more and more abuse and prejudice in Scotland.”

“You cannot imagine it treating any other religion like this,” the bishop said.

“The BBC has to be careful,” Bishop Keenan said. “It has to ask itself if it has ceased to be a broadcaster in the public interest, and is just promoting particular interests.”

Send a complaint to BBC here.