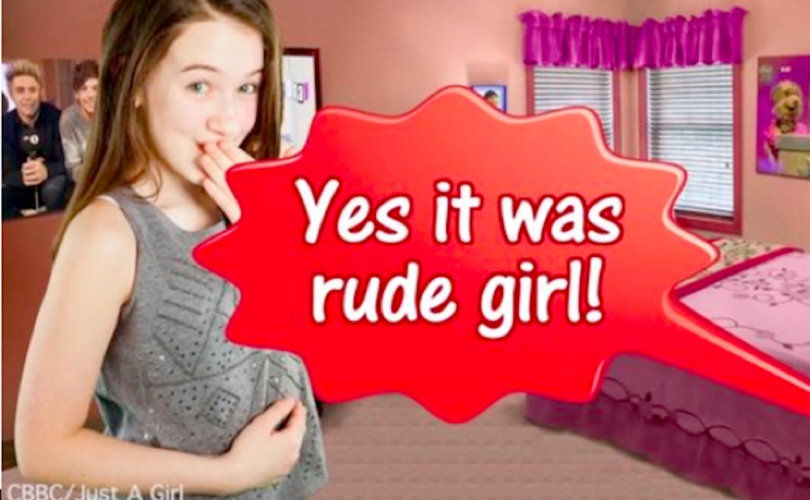 UNITED KINGDOM, November 2, 2016 (LifesiteNews) — The BBC is under fire from Conservative MPs, child development professionals, parents, and Christians over its Just a Girl video series aimed at pre-teens about an 11-year-old boy happily pursuing a sex change by taking hormone blockers.

The series of videos – each only a few minutes long — features a boy named Ben who believes he is really a girl named Amy dealing with the day-to-day concerns of the average male-to-female trans child: what to wear, whether to push for hormone blockers to forestall the advent of male puberty, and when to tell the boyfriend about what kind of genitilia he — Ben/Amy — really has.

The Daily Mail broke the story, describing parents as “furious” while MPs were said to “attack” the Crown corporation over its programming choices.

In fact, the journalistic roundup of experts and parents’ rights groups produced calm and reasonable criticisms for a show that could only encourage children of an impressionable age to consider their gender to be up for grabs.

Norman Wells, director of the Family Education Trust, told the Daily Mail, “The more we promote the idea that a boy can be born into a girl’s body and a girl can be born into a boy’s body, and that drugs and surgery can put things right, the more children will become utterly confused.” Wells said keeping the show away from children was a “child protection issue.”

Roger Kiska of Christian Concern echoed Wells, calling the show “age inappropriate” and adding that it “undermined the rights of parents.”

Member of Parliament weighed in as well. MP Peter Boone said, “It beggars belief that the BBC make this program freely available to children as young as six.” Boone said he has been writing the BBC demanding the show be taken down. A second parliamentarian, MP Julian Brazier, called it “disappointing and inappropriate,” adding that it will “confuse them.”

Child psychotherapist Dr. Dilys Daws called the show “extreme” for presenting children as young as six with the prospect of changing their sex, though she added that it was natural for some children to wonder what life would be like as the opposite sex.

(Yet elsewhere on the Internet, male-to-female trans actor Rebecca Root described how “heartwarming” it was to hear from fans that his comedy series Boy Meets Girl helped them “transition” from one gender to the other.)

As for the BBC, it issued a polite defense: “Just a Girl is about a fictional transgender character trying to make sense of the world, dealing with bullying and work out how to keep her friends, which are universal themes that many children can relate to, and which has had a positive response from our audience.

CBBC aims to reflect true life to our audience, providing content that mirrors the lives of as many UK children as possible.”

Objective studies put the proportion of the population with gender dysphoria at below 1 percent. Other studies report that 80 percent to 90 percent of gender dysphoric children will come to identify their gender with their biological sex by their late teens. Groups such as the American College of Pediatricians have called it a form of “child abuse” to give hormones to children before puberty to prevent natural development.

Psychiatry expert: 'scientifically there is no such thing as transgender