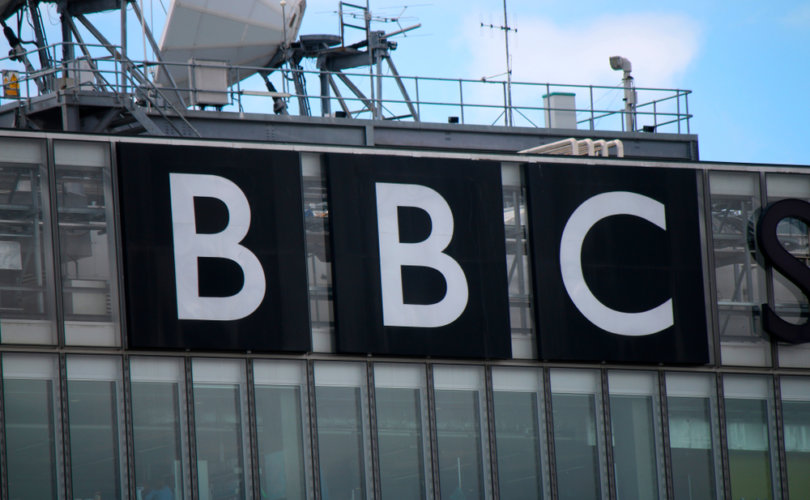 LONDON, England, October 16, 2018 (LifeSiteNews) – The British Broadcasting Corporation (BBC) wants lesbians, gays, bisexuals and the transgendered to be seen twice as much on TV as they are in real life within the next two years.

It's all part of a move by the BBC, the world's biggest public broadcasting corporation, to “increase diversity on and off air to reflect and represent today’s UK.”

In its latest Equality Information Report, the BBC spells out its plan to have eight per cent of all on-screen portrayals be LGBT characters, all in the name of diversity and inclusion. That's more than twice the percentage of homosexuals, bisexuals and transgendered people in the general population.

“The Diversity and Inclusion Strategy we launched in 2016 made clear our firm commitment to change by 2020 and aim to have […] 8% LGBT on screen portrayal including some lead roles,” the report states.

According to the Williams Institute on Sexual Orientation and Gender Identity Law and Public Policy, a think-tank at the UCLA School of Law, only 3.5 per cent of adults in the United States identify as lesbian, gay, or bisexual and less than a third of one per cent of adults identified as transgender in 2011.

But it's not just in front of the cameras that the BBC wants to over-represent LGBT people.

The BBC already has a workforce in which homosexuals, bisexuals and transgendered people are almost three times more prevalent than in the general population. With 11 per cent of its workforce and 12 per cent of its managers identifying as LGBT, the BBC has the highest percentage of homosexuals, bisexuals and transgendered employees of all broadcasters in the United Kingdom.

But, apparently, that's not enough for the BBC. It wants to do even more to increase the prominence of its LGBT employees.

Under plans announced in late September, the BBC will make sure all its leaders and staff are “educated” about what's important to LGBT people who will be further “empowered” to be “comfortable about being open at work.”

“While important parts of the BBC’s output such as many of the programmes in last year’s Gay Britannia season, present balanced and supportive debates on LGBT issues, more could be done to make the BBC’s corporate support for the LGBT community clear,” the BBC indicated in a statement.

The broadcaster intends to build a network of “straight allies” who will actively promote LGBT issues within the BBC. According to a news report, employees who are heterosexual but want to support LGBT issues will wear pins or use email signatures showing they are “allies” of their homosexual, bisexual and transgender co-workers.

In what appears to be a misuse of statistical survey information, the BBC points to a YouGov survey to give the impression that many more people are homosexual, bisexual or transgendered than is known to be the case.

According to YouGov, a market research and data analytics company, only 52 per cent of Brits aged 18 to 24 years old identify as completely heterosexual. The BBC used that fact in the news release of its plans to pander to the LGBT lobby to suggest that young people are increasingly likely to be bisexual or homosexual and that the broadcaster must be LGBT-inclusive to attract and retain top talent.

It's simply untrue, though, that 48 per cent of 18 to 24-year-olds are homosexual, bisexual or transgendered.

Even YouGov's own poll clearly indicates that 83 per cent of Brits in this age group still identify as heterosexual. Two per cent preferred not to tell the pollsters about their sexuality at all and another two per cent said they were something “other” than either straight or LGBT, whatever that is.

Even among this young age group, the most likely group to report homosexual or bisexual attraction, only 13 per cent – and certainly not 48 per cent – indicated they were gay, lesbian or bisexual.

In its polling, the U.K.-based firm asked people to rate their sexuality on a scale so that even fantasies or the occasional feelings of attraction towards anyone of the same sex would be cause for someone to report him or herself as being something other than completely heterosexual.