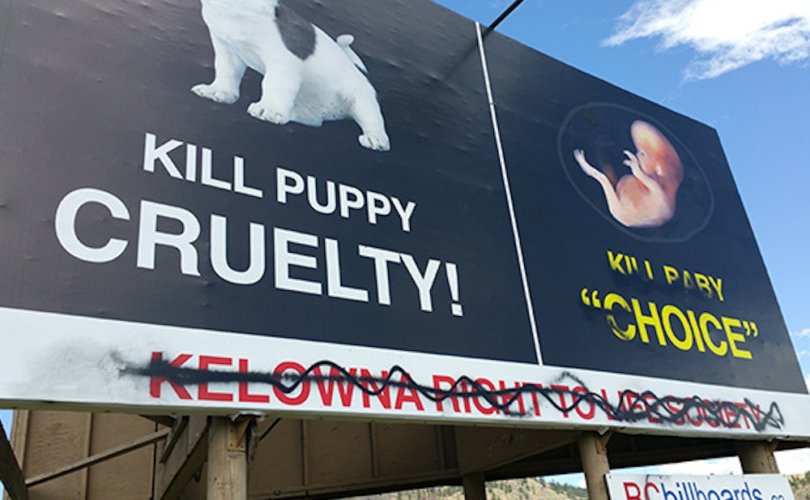 KELOWNA, British Columbia, July 29, 2016 (LifeSiteNews) – Kelowna Right to Life Society will keep up its controversial billboard asserting that people care more about puppies than unborn babies despite being vandalized for a third time — and twice in the past two weeks.

“The sign is fine till March 2017,” Marlon Bartram, the group’s executive director, told LifeSiteNews. “The billboard company is good with it and has cleaned it up for us at a minimal cost. This kind of attack is nothing new to us or to pro-life people who take a stand anywhere. When legal efforts to suppress us fail, then anything goes.”

The sign, which went up beside busy Highway 97 in March, shows a puppy and an unborn baby. The puppy is captioned “Kill Puppy — Cruelty” and the baby, “Kill Baby — Choice.” It is lighted, Bertram said, “and really shows up well in the winter when it gets dark around 4:30, when there is a lot of traffic going by.”

Beneath pictures and captions appear the group’s name, Kelowna Right to Life Society, which was defaced with swastikas last week and, when cleaned off, was obscured by a black line painted through it. The image of the unborn baby had a few drops of black paint splashed on it.

Both the KRTL’s office and Advertising Standards Canada received complaints about the sign, but according to ASC vice president Janet Feasby, the organization took no action because the billboard did not violate any standards. Among the 10 complaints it received was a claim that the billboard’s message was false advertising because fetuses are not babies.

Bartram has added to the controversy by suggesting to local news media that the vandals might have been motivated by personal involvement in abortion. “In our community, an untold number of people have been complicit or complacent in a past abortion. They are hurting deeply. Unfortunately, at times they can act out in destructive ways directed at anyone or anything that triggers their repressed pain and grief. This is one possible explanation for the re-occurring vandalism of our property.”

Bartram told LifeSiteNews, “I’m not pointing the finger at anyone. And the police have no leads. But some people who were critical of the billboard on social media also called for it to be vandalized. It is interesting that the vandalism didn’t start till the complaints to the advertising standards council failed. When legal methods didn’t work, people resorted to illegal means.”

Bartram added that similar illegal measures are routinely experienced at pro-life vigils every week outside the Kelowna hospital that does abortions locally. “They insult us, throw bottles and garbage at us. We are used to it. They think they have a right to and that we don’t have a right to be there.”

Kelowna Mayor Colin Basran has sent KRTL a supportive message. “I don't condone vandalism and I feel that any acts of vandalism are a tarnish on our community, including the damage to your billboard along Highway 97.”

A surveillance camera has been installed to deter further vandalism.

Youths bounce back after vandals destroy their thousand crosses for life