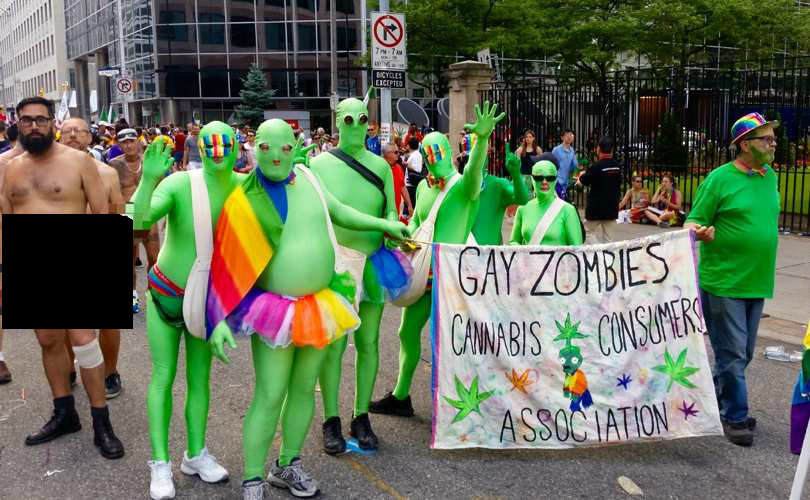 Simpson has released her open letter to the Toronto men’s lawyer, Douglas Elliot, inviting him and his clients, Christopher Hudspeth and George Smitherman, to add her to the suit filed shortly after the recent Toronto Gay Pride Parade.

The suit is a class action on behalf three groups: all 500,000 in attendance; the 9,000 who marched in the parade, and the 500 who attended as supporters of the Ontario or federal Liberal parties, including Prime Minister Justin Trudeau and Ontario Premier Kathleen Wynne.

According to the suit, all were allegedly terrorized, defamed, or traumatized by Whatcott and a small group of supporters who gained admission to the event as “Gay Zombie Cannabis Users” presumed to be distributing condoms to parade goers. Instead, clad in green bodysuits, they handed out pamphlets condemning homosexuality in general and some politicians in particular while citing the Bible.

The lawsuit names Whatcott, wife Joni, and semi-anonymous participants bearing names such as “Brian Zombie” and “Christopher Zombie,” as well as “Jane Does” and “John Does.”

The Does are, according to Elliot, intended to cover “those who paid for his airfare or donated Aeroplan miles to get him to Toronto, those who put him up in Toronto, the people who paid to print the pamphlets, anyone who helped him in any way could be on the hook for $100 million.”

It is from the Does that Simpson wishes to emerge. Never a shrinking violet, the conservative radio host has sued and been sued over her outspoken opposition to homosexual propagandizing in the public schools, and she has called Chief Justice Beverley McLachlin a liar and offered a $10,000 reward to anyone who can prove she isn’t one.

Simpson is daring the Toronto Gay Pride plaintiffs to sue her too, though she won’t say in what capacity she helped the Gay Zombies. If she is named, she can countersue during the lengthy initial phase of a civil action called Examination for Discovery, and acting as her own lawyer, she can interrogate the plaintiffs themselves under oath.

She says she especially looks forward to questioning Trudeau, who has agreed to be a named plaintiff, “about the billions of dollars Canadian taxpayers spend on health and medical costs associated with men having sex with men.”

She is also eager to question Elliott about what she sees as a conflict of interest because his parade attendance places him among the unnamed plaintiffs and also about his “letter of support for Brent Hawkes in the wake of his criminal charges involving indecent assault and gross indecency and a minor male.” Hawkes is a clergyman and homosexual activist facing charges dating to the 1970s.

Simpson informed Elliott in the letter: “I am no stranger to the tactics of those relying on Gay Privilege within the courts — as opposed to the rule of law. I also appreciate that the mainstream media routinely fails to report on important legal matters whenever the result exposes the antics of militant homosexual activists like Mr. Hudspeth and Mr. Smitherman.”

“I note that you are a stickler for rules where others are concerned.” She continues, “I trust that you are clever enough to know that you are in a conflict of interest, and at best may have already compromised the serious accusations made by your clients and the classes of pride attendees — of whom you appear to be one.”

Elliott’s law firm Cambridge LLP did not respond to LifeSite’s request for an interview.