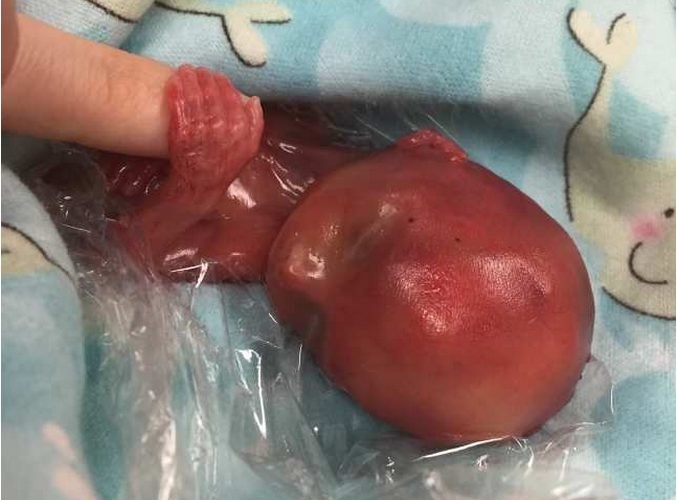 September 23, 2015 (LifeSiteNews) — Charity Tanner woke up in the middle of the night realizing that something was dreadfully wrong. She was beginning to have contractions that kept getting more regular and more painful as they came. With a sinking heart, she feared that her precious baby of only 18 weeks gestation was getting ready to be born, but much too early to survive.

The 30-year-old married mother of two roused her husband Matt, telling him she needed to get to the hospital at once. The parents did not have anyone who could come over on such short notice to watch their sleeping kids. Matt woke 8-year-old Ryan and his 5-year-old sister Caylee and quickly loaded them, still wearing their pajamas, into the car.

They were now speeding on their way to the hospital. Flashing through Charity’s mind in between intense contractions and extreme nausea was the series of events that had brought them to this unexpected and unplanned-for moment.

It was only two months ago in March 2015 that she and Matt had joyfully announced to their children the coming of another member of the family. The parents, who eagerly welcomed this new life, had given their kids a gift bag with baby socks, swaddling blankets, and a framed ultrasound picture, asking them to guess what the items meant.

“Baby stuff,” said Ryan in a video Charity filmed of the event. “You’re pregnant,” he asked with a grin, flashing his eyebrows in anticipation.

A month later, the bleeding started.

“I was basically bleeding non-stop. It was just getting heavier as the days passed,” Charity told LifeSiteNews in an exclusive interview by phone.

Doctors told Charity that she had a complication called placenta previa in which her baby’s placenta had attached to the wrong place in her uterus, covering her cervix. They told her that in many cases, the problem often corrected itself, and that in worst cases, they might have to do an emergency cesarian section once the baby made it to at least 24 weeks, at which point the baby would have a good chance of surviving.

But the bleeding only kept on getting worse.

At one point during a trip to her obstetrics clinic, a doctor she had never seen before told Charity that one way to stop the bleeding would be to “terminate” the pregnancy.

“He told me they had seen this kind of thing before and I might just keep bleeding and risk having something happen to me, or I had the option to terminate.”

Charity remembers being shocked with how casually the option to have her child killed had been offered.

“My husband and I were like, ‘No that’s not even an option.’ There was nothing at all wrong with this baby. He was perfect. He was completely, perfectly, and beautifully formed. I was going to do everything in my power to keep him alive,” she said.

Charity remembered thinking at that time that abortion simply wasn’t a choice that she felt was hers to make.

“My baby had its own life, its own beating heart, and was alive and had potential. Taking all that away was not something I could do,” she said.

Prior to conceiving this baby, both Charity and Matt had dreamed vivid dreams of having a little boy who would bring something special into their family. That’s why as soon as they found out they were expecting, they were both certain they were having a boy…

The car had now reached the hospital. Charity, who was unable to walk due to intense pain, was lifted by Matt into a wheelchair. She was quickly wheeled into a room where she was tended to by nurses and a doctor. An ultrasound showed that the baby had already descended and was ready to be born.

Charity remembers a doctor telling her to push.

“But I didn’t want to push, because I just wanted him to be OK, and that meant him staying inside me,” she said.

But nature took its course, and within moments a tiny fragile baby, still wrapped in his protective amniotic sac, was born.

Everyone in the room assumed the baby had been born dead since an ultrasound prior to birth had hardly been able to pick up a heartbeat. After the birth, a nurse had whisked the remains away and opened up the amniotic sac. She asked if Charity and Matt wanted to see the body. They said they did.

Filled with the deepest of sorrows, the parents beheld the beautifully formed body of their little baby. He had tiny fingers and toes. His eyes, ears, nose, and mouth were all perfectly formed. They saw that indeed he was a boy.

Tiny red veins could been seen running throughout his almost transparent body. His skin was so moist and delicate that it started sticking to the blanket in which they had him wrapped. A nurse came and laid him on plastic to help protect his skin.

STORY: Mom posts stunning photos of her babies, miscarried at 7 and 8 weeks, on Facebook

As the parents cuddled the body of their son, gazing upon his unique features, they suddenly saw that his chest was rising and falling and that his little heart was beating within his body. A nurse told them it was most likely only electrical impulses. But Charity and Matt felt a presence and saw these as signs of life. They were so amazed by what they saw that they captured it on video.

Charity believes that God granted her family a few precious moments to be together with their living son so they could say ‘hello’ to him and then bid him ‘farewell’ until they would meet again. They knew their time with him was going to be short.

“At first it was just Matt and me with the baby. So, we had our little time with him. Seeing my husband with him was probably the hardest moment for me, because I love my husband so much and he had so desired to have this boy. I wanted so badly to be able to give that to him,” Charity recalled.

Matt went to Ryan and Caylee in a waiting room nearby where they were being looked after by nurses to tell them that the baby had been born, but that he had come too early to survive for very long.

“He told me later that when he said this, their faces just dropped,” Charity said.

The kids came into the delivery room, eager to see their little brother and, at the same time, sad to know that they had come to say good-bye.

For about half an hour, the family simply loved the little boy, holding him tenderly and caressing him gently with soft sweet kisses.

“It was a really peaceful experience that at least we were able to be together as a family with our little boy just that one time,” Charity said. “This was something special that we will cherish forever.”

They named him Jaxon.

“There was definitely this overwhelming sadness at the time, but when I look back on this, I’m so glad my children were there and got to see and hold their brother. Jaxon is real to them. They still talk about him all the time. To them, he’s still their little brother, even though he didn’t make it,” she said.

Eventually the signs of life faded away and the little boy’s chest grew still. After spending several hours together in the hospital, his remains were delivered to a funeral home in preparation for burial. With the help of a friend, Charity made a little white outfit for him in which he was buried a few days later.

Charity and Matt, who are Christians, believe they will see Jaxon again. They told their children that he is in heaven with God and that he is there waiting for the day when they will all be reunited again.

“I always tell the kids that he’s watching over them. Our faith tells us that we’re all going to see him again someday. We believe that our family is going to be able to be together forever with each other in heaven,” Charity said.

Charity related that while there was much sadness in the family in the days following Jaxon’s birth, death, and burial, there were also unexpectedly lighter moments. One week after the passing, Ryan approached her, asking “Mom, you’re going to be able to see Jaxon before we do, aren’t you?”

To which she replied with a teary smile: “I sure hope I get to see him before you do. I couldn’t bear going through another one of you dear children dying.”

STORY: Stunning photos of baby Nathan, miscarried at 14 weeks, prove the humanity of the unborn

The Tanner’s grief was still fresh when just weeks later undercover videos showed evidence that Planned Parenthood, the nation’s largest abortion provider, was involved in the illegal harvesting and selling of baby body parts. Some of the unborn victims terminated by abortionists at Planned Parenthood would have been the same — and even older — gestational age as Jaxon. Graphic footage in one video shows employees extracting perfectly formed organs from a 20-week-old aborted twin.

Charity hopes that the images and video of her gestational 18-week-old son will give a face to the countless babies who have been aborted at that age, the targets of violence and barbarity.

“I want to be able to show others that even at 18 weeks old, the pre-born baby is very much alive and very much a whole person.”

“I want people to see that even when they are the tiniest little babies like my Jaxon, they are real living breathing people who are precious and who deserve all our love and respect. They are just as much a person as anybody else is,” she said.

Editor’s note: Had Charity’s pregnancy carried through, Jaxon would have be born around this time, in September.