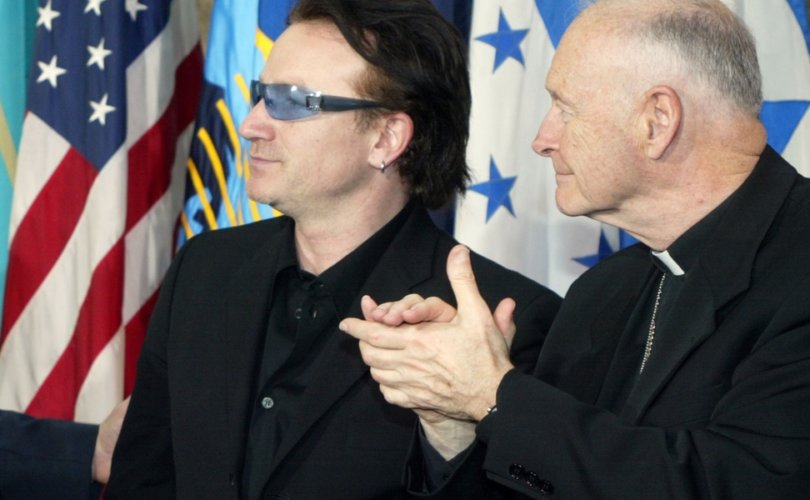 September 24, 2018 (LifeSiteNews) – On the heels of rock star Bono’s out-of-the-blue meeting with Pope Francis last week, a clip from a 2017 concert surfaced on social media with the U2 front man dedicating a song onstage to now-former Cardinal Theodore McCarrick.

“This goes out to an old friend – Cardinal McCarrick,” Bono says during an instrumental interlude of the band’s song “I still haven’t found what I’m looking for.”

The concert took place June 20, 2017, at FedEx Field in the Washington, D.C. area, one year to the day prior to the disgraced ex-cardinal’s removal from public ministry for credible and substantiated allegations he abused a minor more than four decades ago.

It appears it was not the first time Bono invoked McCarrick at one of his shows.

McCarrick was in attendance at a U2 performance also held in D.C. back in October 2009, according to a Georgetown Berkeley Center review of “Bono’s Prophetic Rock Concert.”

“We have a Cardinal at a rock show,” the review says Bono announced. The review described this as a “shout-out” from the star to “his friend and co-activist Theodore Cardinal McCarrick.”

The two have crossed paths in the past and both have been darlings of the social justice left.

McCarrick, 87, enjoyed longtime prominence in the Church as a goodwill ambassador and big fundraiser prior to the abuse charges against him becoming public in June.

Veteran Vatican watcher and Whispers in the Loggia blogger Rocco Palma noted the 2017 Bono McCarrick song dedication in a June 20, 2018, post on McCarrick’s fall from grace, noting how McCarrick’s “fan-base transcended borders.” Palmo had also tweeted about it at the time of the 2017 concert.

Bono’s acknowledging McCarrick at last year’s concert also was covered at the time in The Washington Post.

The allegations of serial abuse of seminarians, young priests, and other young men over decades against McCarrick that came to wider light this past June were reportedly an open secret in the Church and among many media.

Catholics continue to call for accountability from those among the Church hierarchy who knew about McCarrick’s predation and looked the other way.

The meeting between Bono and Francis earlier this week, announced to the media just prior to it taking place, caused consternation with Catholics, in one way because attempts by Argentinian victims of clergy sexual abuse to meet with Pope Francis have been unsuccessful.

The meeting also dismayed Catholics because while he made time to meet with the rock star, the pope has refused to address allegations by former U.S. Nuncio Archbishop Carlo Maria Viganò that he knew about and covered for McCarrick’s abuse since becoming pope. Similar sentiments about priorities and the pope declining for the last two years to address the dubia presented by cardinals were articulated on social media as well.

Further and arguably the most manifest conflict for Catholics is the fact that U2 took the pro-abortion side in repealing Ireland’s pro-life Eighth Amendment and supported legalizing abortion on demand there earlier this year.

Bono, a multimillionaire, said after the meeting that he and Francis had discussed the “wild beast that is capitalism,” and the clergy sexual abuse crisis, and that he thought the pope was sincere in feeling the pain of the abuse situation.

Zenit reported of the meeting that Francis signed an agreement with Bono between his ONE campaign and the Pontifical charity for young people Scholas Occurrentes.

“We have not discovered what we're going to do together,” Bono said, “but we're kind of in love with each other.”

Father John Hollowell, a priest for the Archdiocese of Indianapolis, was among those commenting on the Bono meeting on social media with regard to U2’s abortion support, also noting another problematic aspect.

“Bono’s ‘One Campaign’ is funded almost entirely by the Bill and Melinda Gates Foundation,” Father Hollowell tweeted, “and believes contraception is part of the solution to poverty.”