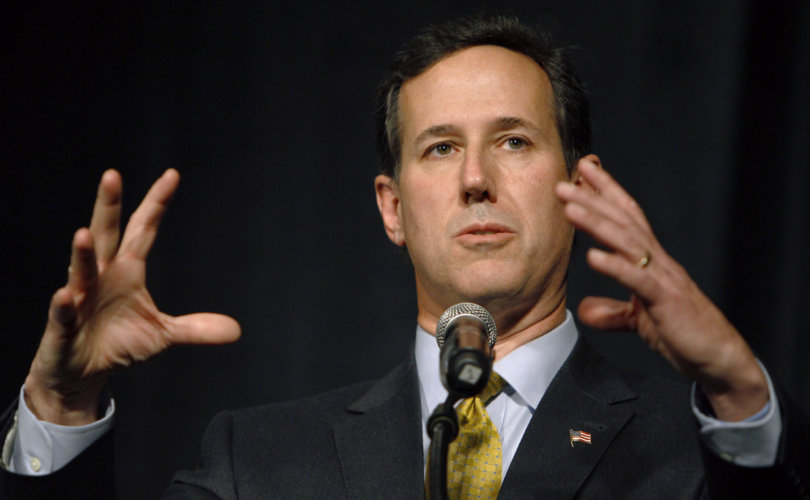 WASHINGTON, D.C., June 4, 2015 (LifeSiteNews) – In an exclusive interview with LifeSiteNews, 2016 presidential candidate Rick Santorum said the right to life is not one plank in a political platform, but “a part of who I am.”

Santorum, who declared that “every life matters” as he announced his second presidential bid last week, told LifeSiteNews that he will not only seek greater protections for the unborn but will live out a pro-life ethic in the East Wing.

“I think the fact that Karen and I have walked the walk of life and are very upfront witnesses of that, even on a daily basis with our daughter, Isabella, witnesses to the dignity of all human life and the value that life brings,” he said.

Like every declared Republican presidential candidate except for George Pataki, Santorum has pledged to sign the Pain Capable Unborn Child Protection Act, which would bar most abortions performed after 20 weeks.

With at least one Supreme Court vacancy looming, he also promised to make “judicial appointments who are going to respect the Constitution, not try to rewrite it from the bench.”

“I think we have the truth,” he said. “Scientific evidence is clear on the dignity of all human life and when that life begins.”

However, winning in broader society will take “a softening of the heart and an opening of the mind to be able to change hearts and minds on this issue,” he said.

And Bella, who has beaten all odds to celebrate her seventh birthday with Trisomy-18, could melt anyone's heart.

He's optimistic that one day the landmark 1973 Roe v. Wade decision, which has led to 55 million abortions in the United States and counting, will be remembered as a legal aberration.

“I believe one day, that court decision will be reversed, and our country will be proud again to say we respect and welcome every life from conception to natural death,” he said. “That's what a good society does.”

Optimism is in short supply, as American beliefs in the definition of marriage and family have been strained by a media campaign to model alternative lifestyles and activist judges advancing dubious jurisprudence.

A pending decision from the U.S. Supreme Court may invent a new “right” to redefine marriage. That, Santorum says, reminds him of the abortion debate.

“As I just said on the issue of life, for 20 years I have said the court was wrong and I have tried to provide leadership and ways in which we can push back on the court and make sure this issue stays alive and in the public square,” he said. “This case, if it is ruled that way, will be similar.”

Nature, he said, proves that a child is “a human being from the moment of conception.” Nature also places its imprint on the definition of marriage. “It is by nature a coming together of a man and a woman,” he said. “You can have a government try to redefine it to be something else, but you can't walk away from the truth of what it is.”

Although often pigeonholed as stances that arise from religious conviction, the former Pennsylvania senator emphasized that his pro-life beliefs are rooted in facts, not faith.

“These are truths that have nothing to do with religion, although they are clearly important to people of faith,” he said. “But they have to do with what is the truth and nature's law.”

Remaining within the letter of the law is important to Santorum, who has promised to undo the Obama administration's habit of redefining, ignoring, or imposing laws by executive diktat to serve his left-wing agenda. Barack Obama has often sidestepped Congress by writing executive orders and guiding the federal regulatory process.

These have included enforcing housing, labor, and civil rights laws as though they cover homosexuals and transgender people, although they do not.

“Every regulation and every executive order that has been issued by the president that is inconsistent with the law will be suspended or revoked,” Santorum told LifeSiteNews. “And by the way that includes everything from regulations on the environment to executive orders on immigration – all of those will either be suspended, revoked, or let expire.”

“I'm not singling out any particular group or any particular subject area, but the fact is the president doesn't have the authority to issue regulations and executive orders that contravene the law,” he said.

In his announcement speech, he promised to revoke executive actions that cost Americans jobs. The Obama administration has impeded the Keystone XL Pipeline, imposed regulations shuttering coal-fired energy plants, and stifled energy exploration on public lands. All are likely candidates for repeal.

While most Americans have struggled during the Great Recession, the suffering has not been evenly distributed. Those who believe in Santorum's “blue collar conservatism” have felt the brunt of the pain, while the “one percent” have prospered in Obama's America.

“What I talked about in my speech on Wednesday was really the opportunity to have prosperity reach all workers in America – not just those who are asset holders, who have done really well in stock markets and real estate markets over the last several years,” Santorum told LifeSiteNews. “President Obama's presidency has been a boon to the wealthy. In spite of what he says is a policy that is directed against the wealthy, the rich have gotten richer and we've seen stagnant wages.”

Santorum believes much of the problem is legislation such as Dodd-Frank, ObamaCare, free trade policies that created mass outsourcing, and legal and illegal “immigration – another area that the president and I have a strong disagreements. And I view one of the reasons that wages have been suppressed is the record number of primarily low-skilled immigrants coming into this country.”

The southwestern Pennsylvania native said if American families hope to recover, America will have to regain the manufacturing base that once fueled the middle class.

“What I've talked about is we need to create an atmosphere in America where we value the opportunity to make things here again,” he said. “Manufacturing will be resurgent here and the jobs that go with it – better paying jobs that will have a great multiplier effect on the economy for overall growth.”

That growth means higher family incomes and a greater opportunity for families to form and prosper.

Santorum hopes his second presidential campaign will prosper and sees signs that it is. He garnered four percent of support among the largest GOP presidential field in recent memory.

“Early in 2012, the polls showed me holding just 4 percent of the votes among Iowa caucus goers. No one gave me a chance. … According to the latest poll out of Iowa, I have even more support than I did at this point in 2011,” Santorum wrote in an email to supporters on Wednesday morning.

Six of the last eight Republican presidential candidates had lost at least one previous primary campaign for the presidential nomination. If Santorum does not follow their footsteps, it will not be because he lacked clarity or fervor on the stump.

“We laid out very clearly why were running, who we're running for,” Santorum told LifeSiteNews, “to try to create opportunities for all Americans to rise, to make sure America is safe and strong and to stand up for the values that make America great.”