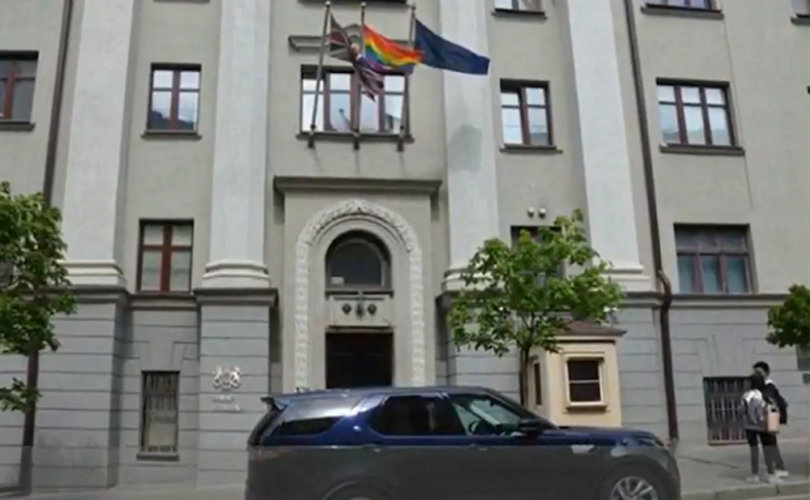 MINSK, Belarus, May 23, 2018 (LifeSiteNews) — The Belarusian government is not pleased that the United Kingdom’s embassy in its country flew a rainbow flag to celebrate homosexuality.

Last week, the embassy posted to social media a video of the flag flying to mark the International Day Against Homophobia, and “direct society's attention to the discrimination that LGBT people encounter constantly.”

But the Belarusian interior ministry has since issued a statement declaring that the flag contradicted the majority of Belarusians’ support for “traditional family values,” the UK Telegraph reported.

“Supporters of single-sex relationships furiously argue their position, despite the principles and traditions that have formed in society. But however you spin it, single-sex relationships are fake,” the ministry’s statement continued. “And the essence of a fake is always the same, to devalue the truth. The LGBT community and the whole struggle for its rights and this community's day itself are all just fake!”

Belarus continues to be ruled by dictator Alexander Lukashenko, who has been condemned by international observers for various human rights abuses. But despite these failings and challenges, pro-family activists have expressed encouragement at the gains of the pro-life cause in the country.

Belarus decriminalized homosexuality after breaking away from the former Soviet Union in 1990, although it continues to reject same-sex “marriage,” and has long resisted the homosexual agenda on the international stage.

“Belarus is based on the foundation of the traditional institutes of the family and marriage,” the interior ministry continued, noting that only the union of a man and woman yields children. “For this reason, the government is protecting this union, putting it under special protection, giving it exclusive rights, including in the political and legal aspects.”

“The initiative of a foreign state to create problems where they do not exist cannot be called good,” the government argued. The British embassy declined to respond.