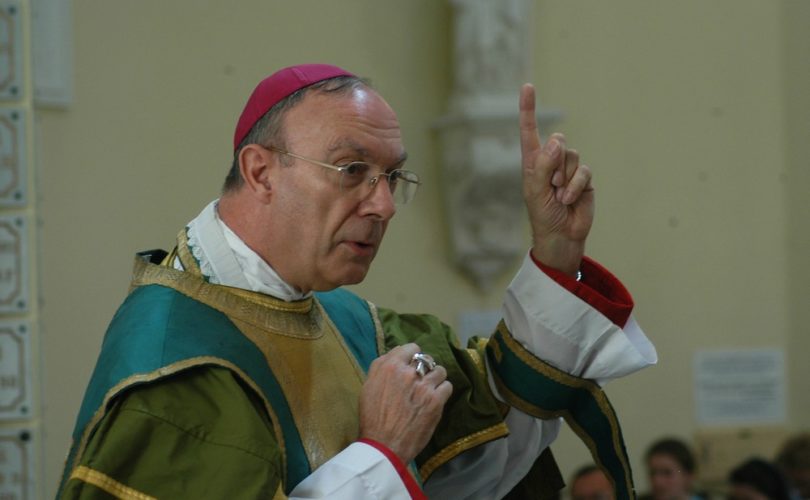 In a sweeping interview, the archbishop emeritus of Brussels warns that the ambiguity in the Synod’s final text was ‘very risky,’ but says he trusts the Pope will hold to his word and defend Catholic Tradition.

BRUSSELS, January 8, 2016 (LifeSiteNews) – Shortly after leaving the see of Mechelen-Brussels at the age of 75 – the official retirement age for prelates of the Roman Catholic Church – Archbishop André Léonard, former primate of Belgium, gave a wide-ranging interview to the French weekly Famille chrétienne. Bishop Léonard made unusually direct remarks about the crisis of vocations, the dangerous “ambiguities” of the recent Synod on the Family and other controversial topics. In liberal Belgium he had the reputation of being conservative and even narrow-minded – contrary to his successor, Jozef De Kesel, former auxiliary bishop to Cardinal Danneels of the infamous “Sankt-Gallen group.” Léonard was even attacked by a group of topless “Femen” activists in April 2013: they drenched him with water during a conference, accusing him of “homophobia” for his statements on the “abnormality” of homosexuality.

But he has never wavered. Responding to Famille chrétienne’s journalist, he said: “I am convinced that the Church’s Magisterium is valid, even on the most sensitive and controversial issues.”

Under his leadership, the number of seminarians progressed tenfold in his diocese, growing from four when he arrived to 55 on his departure. Archbishop Léonard is also known for his openness to traditional Catholic institutions such as the Priestly Fraternity of St. Peter (FSSP) and the Institute of Christ the King, both of whom he welcomed in Brussels. Just before leaving Belgium to retire in the French Marian sanctuary of Notre Dame du Laus, he celebrated Mass in the extraordinary form of the Roman Rite in the church of the Minims where he had named a priest of the FSSP as vicar several years before.

Of special interest to the readers of LifeSiteNews are Leonard’s interview responses regarding the Synod on the Family. Antoine Pasquier of Famille chrétienne asked him: “The second Synod on the Family took place in October. The final text is open to interpretation. How do you read it, having taken part in the first session?”

What is most fundamentally at stake in the Synod is the alliance – in all the joys and suffering of families and couples – of love and truth.

Archbishop Leonard answered bluntly: “I didn’t get the impression of real progress from one synod to the other, rather there was a repetition of what had already been said. It left me a bit unsatisfied. There are good things in the final text, but I was a bit disappointed by the fact that they cultivated ambiguity around the most sensitive issues. Some bishops told me the texts were deliberately formulated in an ambiguous way, in order to leave them open to interpretation in different directions. Such ambiguity on key issues is very risky, as it could give way to practices that would be very difficult to reverse once they have been instituted and developed.”

“I therefore hope”, he said, “that we will have a nuanced and benevolent approach, but that it will remain clear on doctrinal and disciplinary teachings of the Catholic Church regarding marriage and the family. The ball is now in the Pope’s court. The time has come for him to fulfill his Petrine ministry of unity and continuity of Tradition, as he declared he would in his final declaration at the end of the first Synod on the Family. What is most fundamentally at stake in the Synod is the alliance – in all the joys and suffering of families and couples – of love and truth. So says Psalm 84: ‘Love and truth will meet; justice and peace will kiss.’ The Church must be all at once merciful, welcoming all with openness of heart, and faithful to her teachings on marriage and the family.”

Bishop Leonard was equally clear about the idea of delegating more power to bishops’ conferences in matters of discipline.

“That is not a good idea”, he said. “I find it hard to see how discipline could be modulated from one country to another or from one continent to another. I would find it extremely risky for Western countries to be allowed a more flexible discipline. What sort of image would that give of the Church? Would Christians from richer countries, besides the greater comforts that most of them enjoy, also benefit from a more comfortable discipline? It would be a great scandal! On the other hand, there is a point where the diversity of locations should be taken into account: in implementing pastoral care with regard to the different problems that appear in different continents, so as to offer adequate solutions.”

Archbishop Léonard’s plain speaking earned him no little opposition during his five years as Primate of Belgium: an overwhelmingly Catholic nation which gave innumerable missionaries to the Church in the first half of the 20th century but where relativism has become a way of life and religious practice has plummeted. Seventy percent of under-thirties now declare they have no link whatsoever with the Catholic Church and only 25 percent of marriages involve a religious ceremony. The decline accelerated under Cardinal Danneels, who was Primate of Belgium between 1979 and 2010: he was of the vein of the majority of Belgian bishops who openly defied the teaching of Paul VI on contraception in Humanæ vitæ in 1968. How did Archbishop Léonard cope with this opposition both within and without the Church?

“Partly with strong convictions, partly by temperament,” he answered. “During my years of priesthood the Church’s conviction as it regards different aspects of human existence my own. And I am convinced that the Church’s Magisterium is valid, even on the most sensitive and controversial issues. I always judged my mission was to be an echo to the teachings of Christ and the Church on human destiny. So it never disturbed me to paddle upstream, sometimes, against the current of society and the spirit of the times. Wouldn’t you say that is a bit normal? A significant proportion of the Gospel goes against the grain. St Paul, speaking to the Romans, said: ‘Do not conform yourselves to this age.’”

If a man wants to give his life to Christ, the bishop should meet with him! When a young man feels he is important in the eyes of the bishop of his diocese: that will help him to make his decision.

Léonard went on to say: “My convictions prompted varied reactions: there were those who were happy to hear clear language that was truly encouraging them to live according to their Catholic identity, and there were others who protested, sometimes even among Christians themselves because they didn’t really like – even in a world where freedom is considered to be a supreme value – that a bishop should be thinking differently from the dominant mindset. This type of opposition or disagreement is, in a way, inevitable. It is its absence that would have troubled me. Jesus does not promise us success, but rather contradiction. But these small miseries are only a small part of my ministry, and they are nothing compared with what the bishops suffered during the first centuries of the Church, or what bishops suffer today in the Middle-East or in Asia!”

Despite his reputation of “rigidity” and “intolerance” hawked by the Belgian media, Léonard’s steadfast Catholic stances and clear condemnation of the manifestations of the culture of death in a country that has been a fore-runner in social engineering did not deter young men in Belgium from answering their call to the priesthood; quite the contrary.

When asked to explain the sudden in rise in vocations under his leadership in Mechelen-Brussels, Léonard made it plain that what counted in his eyes was the attitude of the bishop to young men who think they have a vocation: it requires welcoming and proximity, he said. “I never sent away a young man who came to see me, I never told him to first go and see the vocations office of the diocese, I always welcomed him. If a man wants to give his life to Christ, the bishop should meet with him! When a young man feels he is important in the eyes of the bishop of his diocese: that will help him to make his decision. I have no miracle recipe. I simply always remained open to the realities to which the Holy Spirit gives rise in the Church. (…) All those who present themselves will not necessarily become priests, discernment is necessary, but first of all there must be a welcoming attitude. What a joy for a bishop to meet a man who wants to consecrate himself to the Church! What a wonderful present!”