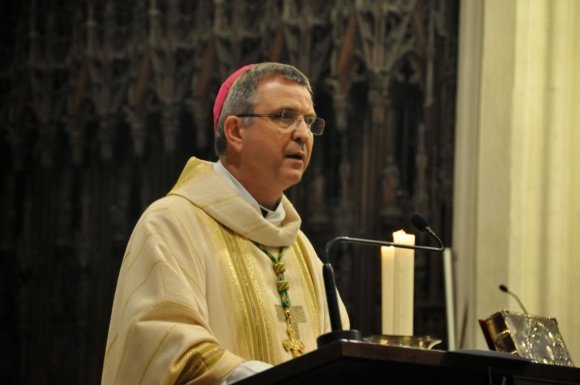 October 6, 2016 (LifeSiteNews) — Bishop Johan Bonny of Antwerp, Belgium, suggested that homosexual couples, divorced and remarried Catholics, and cohabiting pairs should be given some sort of Church blessing as part of a “diversity of rituals” that would recognize the “exclusiveness and stability” of their unions.

Since the two Synods on the Family and the apostolic exhortation Amoris Laetitia, this is probably one of the most radical viewpoints to have been expressed to date in the name of “pastoral care” and “mercy” by a Catholic prelate.

Bishop Bonny offers his thoughts in a book to be published October 11 by Flemish editor Lannoo under the title May I? Thank you. Sorry, an obvious quote from Pope Francis’ frequent talks to married couples.

While Bonny offers an open dialogue about relationships, marriage and family, his most shocking proposals in the book have already been presented to the Dutch-speaking public by the Catholic Church’s official weekly in Flanders, Kerk & Leven. The magazine’s editor-in-chief, Luc Vanmaercke, described the book as a response to the Pope’s call during the two Synods for the Church to take a more contemporary view of society.

The book is a presentation of conversations between Bishop Bonny and Belgian moral theologian Roger Burgraeve, who favors recognition of homosexual identity and unions, as well as Kerk & Leven journalist Ilse Van Halst.

That the book is promoting what amounts to formal recognition of unmarried, remarried, and even homosexual couples should come as no surprise. Vanmaercke hailed the legalization of same-sex “marriage” by governments and parliaments as proof that they do not “consider marriage as an outdated institution, but as still having value, and in which they are prepared to invest … Good news for all those who appreciate marriage.”

If the Catholic Church in Belgium was prepared to name an editor-in-chief such as Vanmaercke for its official weekly, Bishop Bonny’s suggestions appear to be all but mainstream by Flemish standards instead of the lone ramblings of a progressive dreamer.

His “thought experiment” – as the Belgian press calls it – feels uncomfortably close to a fully-fledged proposition that would only require a bit of implementation to become common practice in the Belgian Church. Bishop Bonny uses firm language to put forth his idea:

“There is no way we can continue to claim that there can be no other forms of love than heterosexual marriage. We find the same kind of love between a man and woman who live together, in homo-pairs and lesbian couples,” Bonny writes.

“The question is: Should we try to squeeze everything into one and the same model?” he asks elsewhere in the book. “Should we not evolve towards a diversity of rituals in which we can recognize the loving relationship between homosexuals, even from the perspective of the Church and of the faith?”

Bonny recognizes that same-sex couples cannot express the deeply symbolic link between sexual alterity and fruitfulness, which means, he explains, that they cannot attain a true sacramental union. But having said same-sex marriage cannot exist, he goes on to destroy the teaching of the Church on sexual morality by insisting that any type of “love relationship” can be intent on achieving an “exclusive and lasting relationship” that deserves recognition.

Is that what his interlocutor Burgraeve calls a “smaller good” that correctly expresses the identity of a given person in a given situation? Burgraeve writes elsewhere that if the Catechism calls homosexuality “intrinsically disordered,” that is because it can only be said to be so in an abstract way, in words that can never be applied to concrete and personal circumstances.

So he asks hypothetical questions to which he has long found an answer. “Can I, as a bishop, provide a ritual that is akin to the little sign of cross that parents trace on a child’s forehead, but then to believers who live together and who wish each other all the best, in the light of God’s presence? A sign of the cross is not a sacrament, but it does belong to the order of ‘holy signs and gestures.’ Cannot we, in the Church, create different shades between the ‘nothing’ for unmarried cohabiting couples and the ‘all’ of sacramental marriage, that clearly recognize what is ‘already’ there, and at the same time let see what is ‘not yet’ there?”

For divorced and “remarried” couples, Bishop Bonny appeals to the same sort of reasoning in a way that echoes the recent proposals made to the bishops of greater Buenos Aires, Argentina: “The question of communion for the divorced and remarried should be carefully weighed. It is not a question of a general ‘yes’ or ‘no,’ but of an evaluation. You have to judge on the basis of the individual situation of the persons involved. Or, better said, they can and must participate in that judging in the light of certain criteria.”

This leads him to say the Church should, in some cases, bless a second relationship. “From ancient times, the Orthodox Church has known the confirmation of a new relationship for reasons of mercy, where as a couple you get a new place in the community. This new blessing is however not a repetition or a replacement of the first sacramental marriage. That was and is unique.”

In all the cases he quotes, all the relationships he contends would in some cases at least justify “new rituals” and special blessings, it is not the living together as a community or a friendly relationship that he wants to have the Church endorse. The aim is to bless sexual relationships outside of marriage and even against the law of human nature as good and valid expressions of human love, and therefore as good and valid images of divine Love, albeit in a more imperfect form than “heterosexual marriage.”

To Catholic standards, this is crazy if not downright blasphemous. But there is method in the madness. It twistedly takes into account the fact that sexual activity outside marriage is wrong — a grave sin that prevents the sinner from receiving communion without confession and that prevents him or her from receiving absolution in confession when in a public and lasting sinful relationship he or she has no intention of breaking off.

By moving the cursor from legitimate marriage to a stable and exclusive relationship of whatever kind, a Church blessing would “legitimize” any sexual activity within that relationship, thus lifting restrictions to participation in the life of the Church.

Will Bishop Bonny be officially disavowed by the hierarchy of the Catholic Church?