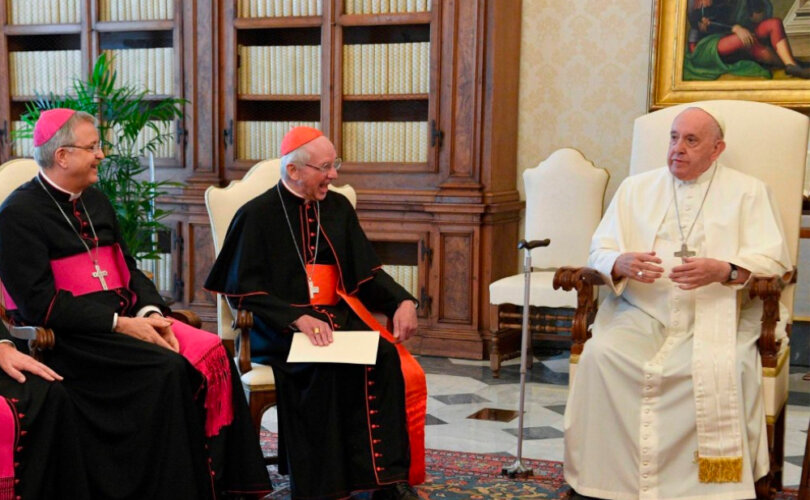 VATICAN CITY (LifeSiteNews) — Belgium’s Catholic bishops have spent a week in Rome for their ad limina visit, where it seems they received no reprimand for their recent publication of a text for same-sex “blessings.”

From November 21 through 26, the Bishops Conference of Belgium (BCB) was present in Rome for their ad limina visit, which saw them follow in the heels of bishops from the Netherlands and Germany who have also been making the ad limina visits.

As with the visit of the German bishops, the Belgian bishops were not entering Rome as notable defenders of the Catholic Tradition, since the Dutch speaking bishops in Belgium had recently published a text for the “blessing” of same-sex couples, in violation of Catholic teaching.

However, speaking to reporters at the close of the visit, Cardinal Jozef De Kesel declared that the bishops had been warmly received by Pope Francis.

‘Real and sincere exchange of views’

“The atmosphere was informal,” said De Kesel, who is president of the conference, as well as Archbishop of Brussels and one of the signatories of the same-sex blessings’ document.

“I had prepared a speech, but it was put aside,” he continued. “It was a moving meeting for us. Despite his age, 86, he is present in a very clear way. That atmosphere was noticeable everywhere.”

When questioned further about the Pope’s two-hour meeting with the bishops, De Kesel downplayed suggestions that the bishops were admonished for their text promoting same-sex “blessings.” Instead, he argued that “an ad limina visit does not serve to discuss concrete files,” saying that this can be done “at other times.”

Noting that society is now “pluralistic” and “increasingly secularized,” De Kesel stated that “one of our great challenges” is now to exist in a non-Christian society.

He appeared to argue that the Church should adapt to conform more with the “increasingly secularized” society, arguing that “one should not judge us with criteria from the past.”

On this point, noted De Kesel, the bishops “had a real and sincere exchange of views.”

I could say freely what I wanted, in an atmosphere of fraternity and respect. Also about pastoral care for homosexuals, for example. We could explain that we want to help those people.

Expanding on his comments to the press, De Kesel stated that they talked with the Pope “about homosexual couples, we talked about viri probati, we talked about the possibility of women’s diaconate.”

While the Congregation (now Dicastery) for the Doctrine of the Faith (CDF) ruled against same-sex “blessings” in 2021, De Kesel said that “in Rome we were able to talk about it [same-sex blessings] and we felt listened to.”

He added that the presence of such discussion “does not mean that my interlocutor necessarily agrees with me, but we have been able to discuss it.”

Doubling down on his support of such “blessings,” De Kesel referenced comments made recently by Monsignor Philippe Bordeyne – the president of the “John Paul II Institute for Studies on Marriage and the Family” – in defense of “blessings” for same-sex couples. “Can these people be asked to live in chastity? We must be realistic,” said De Kesel.

— Article continues below Petition —
PETITION: We won't give any money to liberal bishops who attack the Faith
Show Petition Text
11583 have signed the petition.
Let's get to 12500!
Thank you for signing this petition!
Add your signature:
Show Petition Text

Additionally, the cardinal revealed that the topic of the female “diaconate” had been raised in the bishops’ meetings with the various Dicasteries, in conjunction with the drop of priestly vocations.

‘Grateful for such a meeting’

A similarly positive account of the bishops’ meeting with the Pope is found on the bishops’ conference website. The official report describes the meeting as “a souvenir for life if possible.”

The bishops spoke with Francis “in all openness, peace and confidence.”

Upon leaving the meeting, the report states that the bishops are “Grateful for this Pope. Grateful for such a meeting.” Additional reports document the bishops describing their meeting with Francis as “unforgettable,” “impressive,” saying “what an experience!” and “what a pope we have!”

Such comments certainly seem to reject the notion that the bishops received any condemnation of their advocacy for same-sex “blessings.”

De Kesel, who has been present on previous ad limina visits in 2003 and 2010 – with Pope John Paul II and Benedict XVI respectively – notably summarized the meeting by saying that “the atmosphere has changed” in the Vatican.

“This time we felt listened to, not because the Roman dicasteries had nothing to say,” attested De Kesel, “but also because they had the desire to understand what our situation is. ‘We also have to learn from you,’ we have been told.”

Such a “warm” reception from the Pope to the Belgian bishops is perhaps not surprising. Bishop Johan Bonny of Antwerp claimed in September that he had spoken with Pope Francis and learned that their document proposing same-sex blessings met with the approval of the Pontiff. Bonny stated that “our guidelines for blessing of homosexual couples that we have recently published are in line with Pope Francis.”

LifeSiteNews contacted the Belgium bishops’ conference asking if they had received any criticism for their document supporting same-sex “blessings” during their visit, since De Kesel’s comments made it appear that they had not. A spokesman replied that the document was merely about “accompaniment and within it the opportunity to pray together.”

As with Germany’s bishops, who returned home to continue their Synodal Way after being “encouraged” by the pope, Belgium’s Catholic bishops appear to received similar papal support despite undermining Catholic teaching.

The recent publication of the document on “pastoral closeness to homosexual persons,” including suggestions for a public church “blessing” of same-sex couples, appears to have drawn no public or private condemnation from Pope Francis.

Despite the bishops’ public support for an action so fundamentally opposed to Catholic doctrine – as outlined by the CDF’s ban of such “liturgies” – it seems that they have publicly defied the Vatican and Catholic Tradition without incurring any penalty.