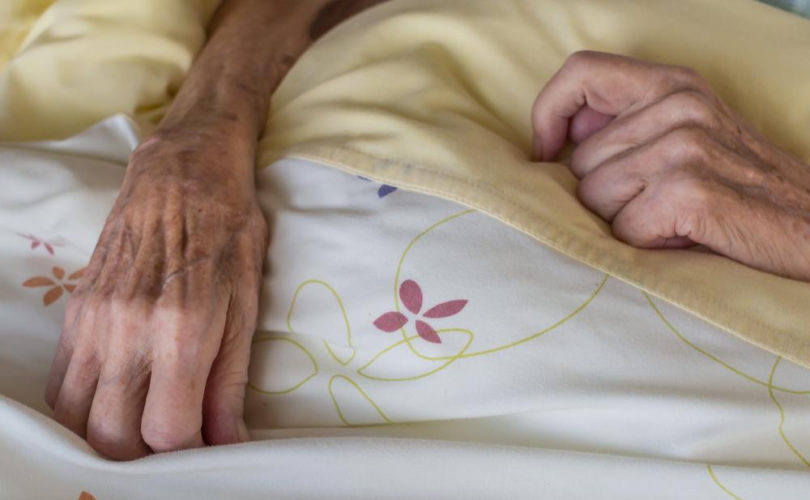 DIEST, Belgium, January 5, 2016 (LifeSiteNews) – A Catholic nursing home for elderly patients in Diest, Belgium, has been sued by the family of a 74-year-old cancer patient for having denied access to her doctor who was to euthanize her four years ago.

Mariette Buntjens, whose metastatic cancer was causing her much suffering in its terminal stage, was eventually removed from the nursing home by ambulance and taken to her home in order to be killed after having said goodbye to her loved ones “in peaceful surroundings.” The lawsuit was filed soon after by her daughter, Nadine Engelen, against the non-profit association to whom the Sint-Augustinus rest home belongs. After two postponements, a hearing is to take place in April at a civil court in Louvain.

The lawsuit is being seen as a landmark case in Belgium where conscientious objection against euthanasia is part of the law for doctors and medical staff, but where the euthanasia lobby is hoping to establish that medical institutions cannot refuse euthanasia to be performed within their walls for moral reasons.

Also of note is the fact that the case, which has been ongoing for over four years, was brought to the media’s attention days after Brussels’ new archbishop, Jozef De Kesel, responded to an interviewer saying that Catholic institutions have a right to refuse abortion and euthanasia. His statement attracted angry criticism from politicians and euthanasia activists alike and appeared all the more “shocking” because he has a solid reputation for liberalism.

Did the journalist know about the Buntjens case and was he anticipating on it? Or had Archbishop De Kesel been informed about the coming media attention that was going to focus on a Catholic health establishment? That is anybody’s guess, and it could even be a mere coincidence. At any rate, the archbishop appears to be supportive of the Sint Augustinus nursing home, although to date there has been no statement or intervention in its favor from the Catholic hierarchy in Belgium.

The lawsuit aims to obtain damages for the extra “physical and mental suffering” borne by Mariette Buntjens because of the nursing home’s executive staff decision not to let her be euthanized there, even though it does not appear that the killing was in any way delayed.

On the other hand, the circumstances of the affair seem quite confused. Buntjens’ euthanasia request was made six months previously, entailing the filling in of official documents, consultations with doctors and nursing staff as well as a physician who was not attached to the nursing home, who was to come in to perform the act. It was only days before the euthanasia was to take place that the directors of Sint-Augustinus let the patient and her family know that he would finally not be given access. At first, they thought there had been some sort of mistake, but they were soon to learn that the nursing home’s authorities did not want the killing to take place within its walls.

“It was terrible for my mother. She was still very alert mentally,” her daughter says.

All this would appear to indicate that a change of mind took place on the part of the nursing home. Sint-Augustinus has not been available for comments, only saying that it is “serenely” waiting for the hearing in April. The point is important: while the Belgian law does not clearly provide for conscientious objection for institutions as such, euthanasia is a sensitive affair and they should make their standpoint very clear, says solicitor Fernand Keuleneer, who is a former substitute member of Belgium’s euthanasia commission.

His legal opinion is that euthanasia is certainly not a right under Belgian law: it remains a crime for which physicians and medical staff escape prosecution under given circumstances as defined by law. Euthanasia legislation does not oblige medical institutions to provide euthanasia: “Parliamentary documents are clear, well-expressed and unambiguous about this,” he said. Refusing euthanasia is part of the “liberty” the law aims to afford.

But Keuleneer does stress that institutions should not hesitate, waver or change their minds so that patients are not exposed to situations where they can no longer choose an alternative “with dignity.”

Wim Distelmans, chairman of the federal euthanasia committee who has been personally involved in a number of “borderline” euthanasia cases, told the Flemish media that “a majority of hospitals and nursing homes in Flanders are still Catholic today.” “If the right to euthanasia is refused there, that will be a problem,” he said. As a specialist in palliative care and a euthanasia activist, Distelmans thinks Sint-Augustinus had no right to refuse euthanasia because Buntjens was not, strictly speaking, there as a patient, but as a tenant renting a room as her home. He said euthanasia doctors in Flanders are “sometimes” confronted with similar refusals but that the patient’s loved ones have never prosecuted up till now because “they think it’s useless.”

Clearly, the present case is going beyond that personal viewpoint: the objective appears to be to obtain a sweeping obligation that will help turn euthanasia into a personal right.

Distelmans also said that Sint-Augustinus should lose its public funding over the affair, as did liberal politician and MP Jean-Jacques De Gucht.

Whatever happens next April, the Buntjens case will have shown that Belgian Catholic health care facilities have not adopted a clear stance on euthanasia and related issues.

Since euthanasia was made legal in 2002 in Belgium, conscientious objection is the exception rather than the rule and “mercy killing” is regularly performed in Catholic institutions.

Zorgnet Vlaanderen, the Catholic network that supervises mainly Catholic health facilities in the region according to “Christian ethics” says it gives no instructions to nursing homes as regards euthanasia. “We can imagine that the authorities may have preferred euthanasia to take place in a patient’s home, in order to preserve the nursing home’s serenity,” is all a spokesperson said about the Buntjens case.

The rector of the Catholic University of Louvain (KU Leuven), Rik Torfs, had reacted similarly to Archbishop De Kesel’s statement on the freedom of Catholic institutions to refuse abortion and euthanasia. He was “not shocked,” he said, “because the doctor’s conscience is paramount… You cannot force a doctor.” A former Christian Democrat senator, Torfs added however that he can “hardly imagine that it would be impossible to find a single doctor willing to perform euthanasia.”

In the same way the deputy director of Zorgnet, Peter Degadt, assured the media that “all” facilities in the network provide euthanasia: “The question is not whether you provide it, but how,” he said, adding that talking to the patient and assessing the context is “crucial.” Degadt said there was no question of reviewing those guidelines in the wake of De Kesel’s remarks.

The archbishop is known for his support for Canon Pierre de Locht, a controversial priest who died in 2007. Although he was well-known for his support for euthanasia and his connection to the “Death with Dignity” society and also with prominent abortion activists, Jozef De Kesel, who was at the time assistant-bishop to Cardinal Danneels in Brussels, not only chose to take part in de Locht’s funeral but also pronounced a personal and heartfelt eulogy in which he praised the Canon’s work “as a Christian and as a priest.”

This is one of the reasons why De Kesel’s remarks about the right to refuse euthanasia and abortion were surprising to many.

On the other hand, they are in line with his liberal standpoint that is more interested in the freedom of choice than in the choice itself. He certainly did not condemn Catholic institutions that openly and freely provide euthanasia in Belgium today and that have been doing so for years. While there is clearly a crisis of authority in many parts of the Catholic Church, he could have said that Catholic health facilities not only should be “allowed” to refuse certain medical acts but that they are morally obliged to do so.

Jacqueline Herremans, president of Belgium’s “Death with Dignity” society, called De Kesel’s statement “a storm in a teacup” on her Twitter account, stressing that he knows full well that Catholic institutions in Belgium practice euthanasia and that his “ranting will be of no effect.” “De Kesel is reassuring the Church’s authorities by making a stance that is bound to fail.” “What is the Church doing about doctors, nurses and priests who are involved in euthanasia?” she asked.

Apparently, not much. And things are evidently staying that way in Belgium.