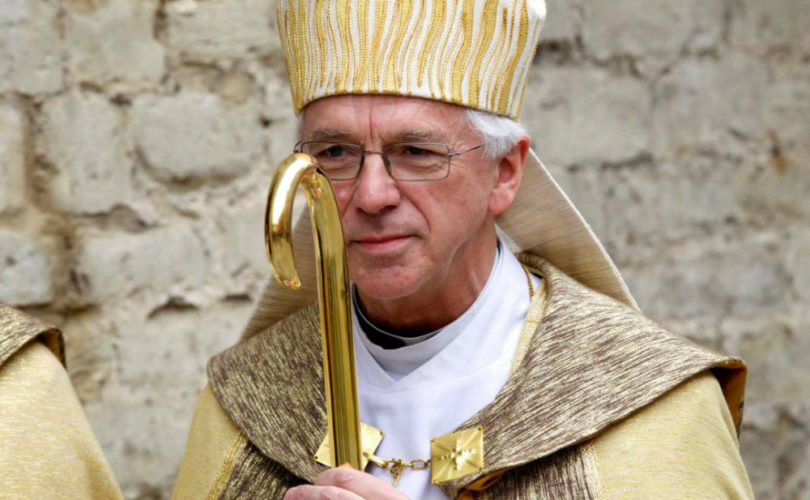 BELGIUM, May 4, 2018 (LifeSiteNews) – Cardinal Josef De Kesel has told an LGBT group he met privately that he finds it acceptable for gays and lesbians to live out their sexual desires, according to the Belgian LGBT magazine Zizo-Online.

The publication claimed on Wednesday that De Kesel – who succeeded  “archconservative” Bishop André-Joseph Léonard as Archbishop of Brussels-Malines in 2015 – made a number of statements favorable to the LGBT cause. It reported those remarks within quotation marks. Zizo spoke of a “historical change of course” even though the Cardinal has never expressed such views beyond private circles.

The online magazine reached out to the archdiocese for a reaction but was told there would be no more comments.

LifeSiteNews called the Archdiocese of Brussels on Friday and in a further email exchange, obtained a written statement from Cardinal De Kesel’s spokesman, Geert De Kerpel. He told LifeSite that the archdiocese would not comment on the contents of the Cardinal’s conversation with representatives of HWLM because it was a “personal meeting,” but he did offer this clarification (in English):

“A small delegation of a working group on homosexuals in Malines asked for a meeting with Cardinal De Kesel. In this personal conversation, he listened to them, expressed his concern for their well-being and expressed his respect for them. He tried to answer their questions. It was a personal meeting. He wants to be close to them and help them in their situation. He also spoke to them about their relationship in distinction from a Christian marriage between man and woman. If there is restraint in the Church’s position, it is precisely to preserve the great value of marriage and family.”

This discreet reminder of the “great value of marriage” can in no way be construed as a denial or a retraction of the Cardinal’s alleged remarks as quoted by Zizo. The fact that a homosexual relationship differs from Christian marriage is nothing new. However, it is not fundamentally a question of degree, but of nature. From the Catholic point of view, an active homosexual relationship is not something “less good” than marriage, it is something deeply wrong and immoral.

To what degree did Zizo see, report, or interpret the Cardinal’s remarks in its own light to make them seem more favorable to the LGBT community than they really were? This remains an open question. In the absence of a formal refutation, which should have been forthcoming in order to avoid confusion among the Catholics of Belgium, these comments should at least be discussed as if they were authentic.

Zizo kicks off with a reminder that Pope Francis himself has mitigated the Roman Catholic Church’s stance on LGBT sexuality, recalling his “historic declaration” of the question “Who am I to judge?”

“But the official standpoint is still unchanged: you’re allowed to be homosexual, but you should not live it out,” writes journalist David Schoenmaekers.

He goes on to say that while De Kesel – who was named to the see of Brussels and given his cardinal’s hat by Pope Francis – has never officially spoken about LGBT sexuality, he is often faced with questions on the theme from the press.

It appears he was more talkative during his April 24 meeting with HLWM, in which the Cardinal is quoted as saying: “The church must respect gays and lesbians more, including in the way they live out that sexuality.” To this, Zizo remarked: “It appears that the top of the church is now prepared to accept LGBT relationships.” It added that the Cardinal “appeared truly to care about the well-being of gays and lesbians and he also talked about his meeting with a trans woman.”

Zizo goes on to say that according to De Kesel, the Church needs time to learn to understand homosexuality. He is said to have made a comparison with the time when mentally disturbed people landed in prison, because the phenomenon of mental illness was not understood.

He is quoted as saying: “Not so long ago the church was very hostile towards gays and lesbians. But that was not different to what happened in society as a whole. In Europe, certainly, many things have taken a turn for the better, but the Church in Africa, Asia and parts of Eastern Europe, especially, has not joined in. But those opinions also should be respected by us.”

Cardinal De Kesel is also said to have remarked that he himself has changed his views: “Twenty years ago I would have spoken differently from what is now the case. At that time I would have followed the official teaching of the Church more. My attitude has become much more ‘understanding’…respect takes the central place.”

And so Zizo deduces that same-sex attracted persons may act out sexual feelings, “even though the Church leader expects that to take place within a stable relationship.”

Schoenmaekers quotes De Kesel as having spoken about “a relationship where honesty, stability and faithfulness take the central place.”

“I certainly do not favor promiscuity, not for LGBT's and neither for hetero’s,” the Cardinal allegedly remarked.

According to Zizo, the official recognition of LGBT relations would be “a bridge too far.”

De Kesel is said to have rejected the idea of church weddings for gay or lesbian couples, but also that of a blessing. “Or did he?” writes Zizo.

“Once more we quote from what HLWM reported,” which was the Cardinal’s alleged assertion that “A blessing is perhaps not the right word. Because it looks too much like the ‘blessing’ of a marriage. I would rather speak about a ‘thanksgiving celebration,’ or a ‘prayer celebration.’”

That would have an enormous symbolic value in the church, comments Schoenmaekers, remarking that there is as yet no way to know what such a ritual would look like. But here is what the Cardinal is alleged to have said: “A church prayer for the relationship between two men or two women is certainly possible, as long as it doesn't begin to look like a church wedding. That is why an exchange of rings, for example, would not do.”

Did Cardinal De Kesel remind his audience that homosexual acts are by their very nature gravely sinful?

It would appear not: according to HLWM’s website, he merely explained: “The official viewpoint of Rome is that homosexuality is ‘a disordered behavior’ because it does not follow the normal order, where sexuality is oriented towards procreation… Everyone can clearly feel that the official viewpoint is no longer sustainable. Some time ago Pope Francis said about LGBT’s: ‘Who am I to judge people who are searching for God?’ Those words are not nothing. Those words were unthinkable ten years ago. They bear witness to what he personally believes. Francis has made his mark. It will not be easy to turn back.  Not even under a new pope. Although I do admit that Francis’ words did not fall on good earth everywhere.”

Cardinal De Kesel is also alleged to have said: “Let me be clear: I have absolutely nothing against civil same-sex marriage. But I do have objections to a church same-sex marriage. The sacrament of the church marriage is something between a man and a woman, with an eye to procreation. That is not the case with gays and lesbians.”

Church rules for dealing with gay or lesbian couples “are still in full development,” the cardinal allegedly concluded.