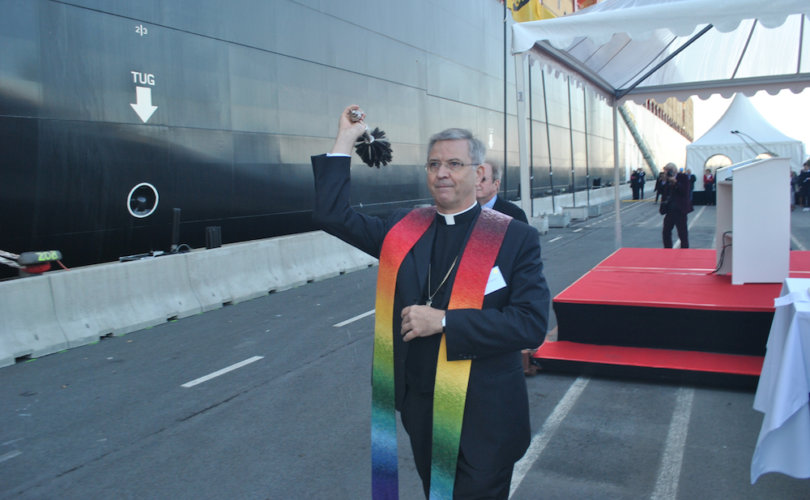 October 24, 2016 (LifeSiteNews) — Pro Familia, a Belgian association of Catholic lay people, has decided to act against the public stance made by Antwerp Bishop Johan Bonny, who suggests in a new book published Friday that homosexual pairs, divorced, remarried and cohabiting couples should receive a Church blessing as part of a “diversity of rituals” that would recognize the “exclusiveness and stability” of their unions.

“The question of Communion for the divorced and remarried should be carefully weighed,” he writes. “It is not a question of a general ‘yes’ or ‘no,’ but of an evaluation. You have to judge on the basis of the individual situation of the persons involved. Or, better said, they can and must participate in that judging in the light of certain criteria.”

In a press release published last week on its blog and picked up by the Flemish media, Pro Familia announced its intent to file a complaint in Rome with Cardinal Beniamino Stella, the Prefect of the Congregation for the Clergy, before the book May I? Thank you. Sorry. Open dialogues about relationships, marriage and family reached bookstores in Flanders. Cardinal Beniamino will be asked in his capacity as superior to the bishop to “investigate and condemn the statements and writings of Johan Bonny.”

This of course seems like the world turned upside down: Bishops are supposed to follow “Church teaching.” Together with the Pope, they are responsible for transmitting the Magisterium to laymen and the members of the clergy who do not have the fullness of priesthood that belongs to the bishops. So how can mere laymen judge their own bishop?

In truth, the complaint filed in Rome is an appeal to authority, so that the obvious erroneous teaching of a particular bishop, Bonny, will be known, assessed, and judged by his superiors. The fact that it is in error becomes clear when comparing it with the traditional and invariable teaching of the Church that considers homosexual leanings “intrinsically disordered” and homosexual activity an objectively grave sin.

Catholics are “fully within their rights” to speak up if clergy are contradicting the faith, a marathon-running religious sister told LifeSiteNews in an exclusive video interview. “Things are laid out very clearly, not only in Scripture, but also in the Catechism, a beautiful book that lays out everything so beautifully,” the Diocese of Steubenville, Ohio’s Sister Mary Brigid Callan told LifeSiteNews.

The complaint of Pro Familia underscores the fact that Rome has left large numbers of the faithful in a state of confusion created by Amoris Laetitia and the synods that ran up to the publication of the apostolic exhortation on love and family.

In a troublesome development of “synodality,” bishops’ conferences and individual dioceses have been interpreting the text in contradictory fashion. Some uphold the traditional teaching of the Church in regard to cohabitation, remarriage after divorce, and the attitude toward homosexual acts. Others – with encouragement on a personal level from Pope Francis – are advocating for more “openness” for “so-called irregular couples” as Amoris Laetitia calls them, including access to Holy Communion in certain situations. LifeSiteNews has reported extensively on these issues.

Bishop Bonny put it like this: “Should we not evolve towards a diversity of rituals in which we can recognize the loving relationship between homosexuals, even from the perspective of the Church and of the faith?” He also wrote: “There is no way we can continue to claim that there can be no other forms of love than heterosexual marriage. We find the same kind of love between a man and a woman who live together in homo-pairs and lesbian couples.”

Pope Francis’ apostolic exhortation does not say anything of the sort in so many words. On the other hand, it contains ambiguous expressions that can be interpreted in that direction as some have already hastened to do. In Bonny’s case, the link with the interpretation of Amoris Laetitia was made by the bishop himself in a filmed reaction on Flemish television, atv.be. Asked what he thought of the appeal made to Rome by Pro Familia, he answered:

Everyone is free to go where he wills. So are they. I would just like to invite them, before they step to Rome, to read what came from Rome, from the present Pope: Gaudium Evangelii – The Joy of the Gospel – and Amoris Laetitia. It might be more useful to read those beforehand, and to leave off going to Rome until then.

He went on to comment: “So many new variations on the theme ‘relations and marriage’ have appeared, before a person steps into a civil or a Church wedding. … There are also stories of blended couples and families as well as the question, in our society, of homo-couples. How can we deal with that diversity in such a way that it is respectful for every person, so that all those who want to be Christians today and who want to be together with the Church can find a spot within the Church community in their personal situation?”

Is Rome prepared to judge and sanction public statements such as those made by Bonny? That is the real point at issue. Because as far as objective heterodoxy goes, things are very clear.

In its press release, Pro Familia underscores that Bonny’s pronouncements are “wrong with regard to Catholic norms.” There is no way the Church can recognize relationships between homosexual pairs, divorced and remarried Catholics and cohabiting couples. From the standpoint of Catholic norms, Bonny's offensive declarations and writings cause public scandal, they are aggravating to pious ears, absurd, and even downright blasphemous. The Church cannot ‘bless’ what God has forbidden.”