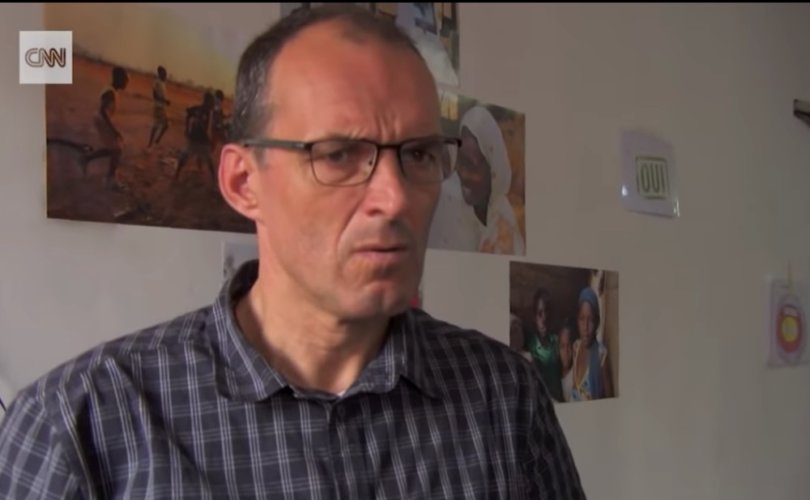 KAGA-BANDORO, Central African Republic, November 25, 2019 (LifeSiteNews) ― The Salesian order sent one of its Belgian priests convicted of possessing child pornography and two counts of child abuse to work with vulnerable families in Africa, where he is alleged to have abused more children.

Fr. Luk Delft, 50, a member of the Salesian order, was convicted of two counts of child sexual assault and of possessing child pornography in 2012. Given a suspended sentence, Delft was forbidden from contact with children for ten years. Nevertheless, he was sent to the Central African Republic (CAR)  in 2013, where he worked with internal refugees in Kanga-Bandoro. Now two men from the town of Kaga-Bandoro have accused Delft of having assaulted their sons.

“There are plenty of women that he could have had sex with,” the father of alleged victim Alban Onono told CNN. “He preferred to sodomize my son.”

A reporter from CNN confronted Delft before cameras in Bangui, the capital of Central African Republic, and then reported the allegations to Caritas Internationalis and the priest’s superiors.

CNN has accused the Salesian order of endangering children by covering up for Delft.

In a statement published on a Belgian Salesian website, Salesian spokesman Carlo Loos said that the order never attempted to hide Delft’s record.

“CNN's suggestion that the Salesian Order attempted to hide [Lukas Delft’s] background, or provided incomplete information, is not correct and tendentious,” he stated in Flemish.

Loos said that the Salesians had kept both Belgian civil authorities and a bishop in the Central African Republic aware of Delft’s situation.

“It is the Belgian court that has authorized the person involved to take up a task in CAR, with guarantees from the then bishop in Central African Republic that [Luk Delft] would be under supervision and further fulfill its conditions,” Loo stated.

“[After] the first reports about possible new facts, we ourselves called in the authorities.”

In 2015, Delft was appointed the director for Catholic charity Caritas Internationalis within CAR.  Thierry Bonaventura, a spokesman for the charity, told LifeSiteNews that Caritas has not been in contact with Delft since June 2019.

“Caritas is saddened and outraged by the child abuse reported by CNN in its story on Luk Delft, a Belgian religious priest who was a previous national director of Caritas Central African Republic,” John stated on Thursday.

“We express our compassion and solidarity with the children and their families. We thank those who have come forward. They have our full support in telling their truth,” he continued.

“At Caritas, we are constantly working to improve our safeguarding of children both in the Central African Republic and in the rest of the world where Caritas works to help people in need. Our first duty is to protect those we serve.”

John added that the accused Salesian is no longer in the Central African Republic, and that both civil and religious authorities are now investigating the allegations.

“Caritas Internationalis has asked all national organisations worldwide to vet their governance, staff, volunteers and international staff,” he stated.

Spokesman Thierry Bonaventura told LifeSiteNews that Caritas Internationalis Safeguarding Policies consist of a series of documents, which include: the Children and Vulnerable Adults Safeguarding Policy, the Complaints Handling Mechanism Policy and Procedure; the Code of Conduct; and the Anti-harassment Policy.

“The CI Safeguarding Policy has language about safe recruitment,” he wrote.

“Prevention includes safe recruitment – referencing and vetting prospective applicants with emphasis on impeccable track record in carrying out their work in conformity with the Code of  Conduct. Caritas Internationalis is adhering to the sector-wide referencing scheme called [the] inter‐agency misconduct disclosure scheme,” he continued.

“The breach of any of these policies is managed by member organisations and may lead to disciplinary action, including dismissal.”

Bonventura explained that Caritas Internationalis is a confederation of autonomous member organizations under the responsibility of their respective Episcopal Conference.

On Friday the United Nations announced that it has suspended work with Caritas operations in the Central African Republic. The UN itself has come has come under scrutiny in recent decades for rapes committed by its staff and peacekeepers across the world.

“As Salesians, we condemn sexual abuse and are committed to securing and promoting the safety and well-being of children. We also want to stress that we take abuse very seriously and sympathize with the victims and their families,” Carlo Loots, a spokesman for the Salesians, stated in an email to LifeSiteNews.

“When the facts came to light in 2001, we immediately suspended the confrère in question and removed him from the boarding school. In addition, our provincial head obliged the Salesian in question to go into therapy,” he added.

“Priests who are accused of or tried for these kinds of offenses cannot simply be removed from the order.”

Loots reiterated to LifeSiteNews remarks he earlier made concerning the awareness of both Belgian authorities and Caritas of Delft’s criminal record.

“After his conviction, the priest received permission from the Belgian Probation Committee to carry out a logistical mission in the Central African Republic,” the spokesman said.

“The responsible persons from Caritas Centre afrique were aware of the priest's past history. Clear agreements were made with them regarding the employability of the Salesian.”

Loots said that this priest’s history has been recounted and emphasized several times and also that he was not sent to Africa to teach children.

“The priest in question did not perform any pedagogical tasks but was responsible merely for fundraising and the development of the organisation,” he told LifeSiteNews.

When the Salesians were informed of the new allegations against Delft, they acted immediately to “ensure the safety of the local children,” Loots said.

“The priest in question was recalled and the necessary authorities, including the Public Prosecutor of Leuven (Belgium), were informed.” explains Carlo Loots.

The Salesian order says it has also started an ecclesiastical investigation although Loots warned that they are not responsible for any decision to return Delft to the lay state.

“It is often expected that priests who are guilty of sexual abuse would be removed from their priesthood,” he wrote.

“Only the Congregation of the Doctrine of the Faith can make such a decision after an ecclesiastical investigation has been completed and the accusations have been proven.”

Loots added that Delft has been suspended from the performance of his priestly duties.