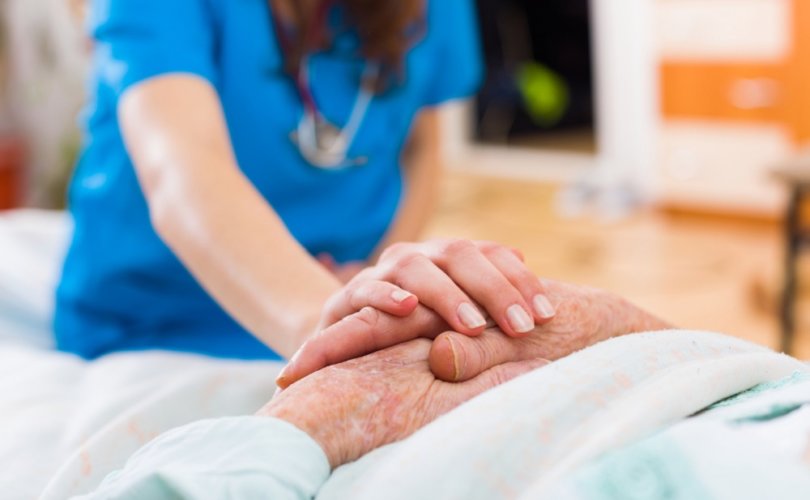 February 14, 2020 (LifeSiteNews) — Several Catholic hospitals in Belgium are under fire from the media and liberal politicians for their efforts to avoid giving euthanasia by “obliging” patients first to undergo palliative care — also known as hospice care — in end-of-life situations. Belgian health minister Maggie De Block has stated that the Catholic hospitals are violating patients’ rights.

According to the official report that preceded the adoption of the Belgian euthanasia law, the fact that euthanasia was simply being decriminalized through a series of conditions and exceptions meant that hospitals would be within their rights in refusing to implement euthanasia for reasons of conscience.

However, a case of conscientious objection on the part of a Catholic hospital in Brabant, Flanders in 2011 was sanctioned by the courts five years later and ordered to pay 6,000 to the family of Mariette Buntjens, 75, who had to be taken home by her family in order to be legally killed. It was argued that as Catholic health institutions are part of the public health system, they are compelled to provide all “health services” offered by the law.

At the time, Fernand Keuleneer, a lawyer and former deputy member of the federal euthanasia commission, published an opinion piece, contending that hospitals are in no way obliged to include euthanasia in their “care package.” He added that hospitals should clearly state their policy on the issue.

Regarding the present controversy, Keuleneer tweeted on Thursday: “Catholic hospitals are allowed to refuse euthanasia,” with a link to his 2016 article.

Theo Boer, a former proponent of euthanasia in the Netherlands, answered: “Why specifically Catholic hospitals? Why not simply all healthcare institutions that are bothered by this?” “I agree,” replied Keuleneer.

The most recent controversy went public in Belgium on Thursday, when De Morgen published a story of a terminally ill man who died before his euthanasia request could be implemented. He was suffering greatly, according to his wife Martha, but the Catholic hospital where he was being cared for informed him that he should follow a palliative care process before his request could be granted. He went through eleven days of “agony” before he died a natural death, she told De Morgen.

Apparently, no one is surprised that these Catholic hospitals should not simply refuse the killing of terminally ill patients. It appears that they only try to delay the procedure — making it unnecessary in some cases because death comes of its own — but that is already too much, according to critics.

Most worrying is the fact that liberal politicians and euthanasia campaigners have been joined by Minister De Block, who told Parliament on Thursday that the Catholic hospitals’ effort to put a brake on effective euthanasia is against the law.

De Block said hospitals should inform patients asking for euthanasia that they can receive palliative care.

“But their obligation to provide this information to the patient may not be misused in order to delay a euthanasia procedure,” she added. “It is unacceptable that granting euthanasia in hospital should be linked to the obligation first to receive full palliative care.”

The minister said there is no excuse for what she had read in De Morgen. “As a doctor, I am vicariously ashamed for such inhuman treatment. The carer may not exert pressure on the patient in order to obtain a choice in that or in no direction. Imposing a palliative filter certainly puts patients under pressure finally to opt for palliative care,” said De Block.

She also encouraged people who are of the opinion that their patients’ rights are being violated regarding their euthanasia request to immediately file a complaint with the ombudsman for patients’ rights, she told De Morgen.

This clearly indicates that the public authorities have already decided not to respect any kind of opposition to euthanasia, even in its most hesitant form, even though euthanasia is not a patient’s right in itself in Belgium. It is performed only when doctors and health-carers, acting according to the law, consider that all legal conditions have been met.

Catholic hospitals have responded by saying there’s nothing wrong with their attitude. Some — such as Gasthuiszusters Antwerpen, AZ Nikolaas in Sint-Niklaas and AZ Sint-Lucas in Ghent — make clear on their websites that they consistently make use of the so-called “palliative filter” to filter out the large number of euthanasia requests that they say are not effective requests to die, but rather calls to make end-of-life situations bearable.

In 2002, the bishops’ conference of Belgium unsuccessfully attempted to obtain the incorporation of the “palliative filter” in the euthanasia law that was being discussed at the time. After the law was adopted that same year, it was decided that Catholic hospitals would use it all the same, because all hospitals are permitted to have their own medical ethics policies. Today, the limits of that right are becoming very clear.

Legal experts support De Block’s view that obliging a patient who wants euthanasia to receive palliative care is against the law. Professor Luc Deliens, a university specialist in end-of-life care, said palliative care is “good medical practice,” but he said it goes against patients’ rights to force them to receive such care “because a patient has the right to reject a particular treatment.”

Gwendolyn Rutten, president of the Flemish liberal party “Open VLD,” tweeted her opinion that “the compulsory palliative filter is inhuman and turns the law to a hollow shell.” “Asking for euthanasia is a right. … A civil law stands above the will of the bishops,” she added.

At the institutional level, Paul Callewaert, secretary-general of the Socialistische Mutualiteiten — a public insurer that pays for medical costs as covered by national social security as well as additional coverage — accused “ some hospitals” of “thwarting” the end-of-life laws, which, he said, are “clear.” According to Callewaert, they should not be allowed to delay euthanasia processes.

Palliative care aims at alleviating suffering when there is no therapeutic option available to heal or to stabilize a patient whose death appears unavoidable. Treatment is no longer given except to calm pain and to make the patient comfortable, sometimes with the use of sedatives.

In principle, palliative care does not and should not use medication with the intention of provoking the death of the patient, even if, in some cases, death is hastened as an involuntary consequence of pain-alleviating procedures.

The Flanders Federation of palliative care does not appear to be in line with this principle. Reacting to the controversy, it deplored that palliative care should be framed as delaying a euthanasia request.