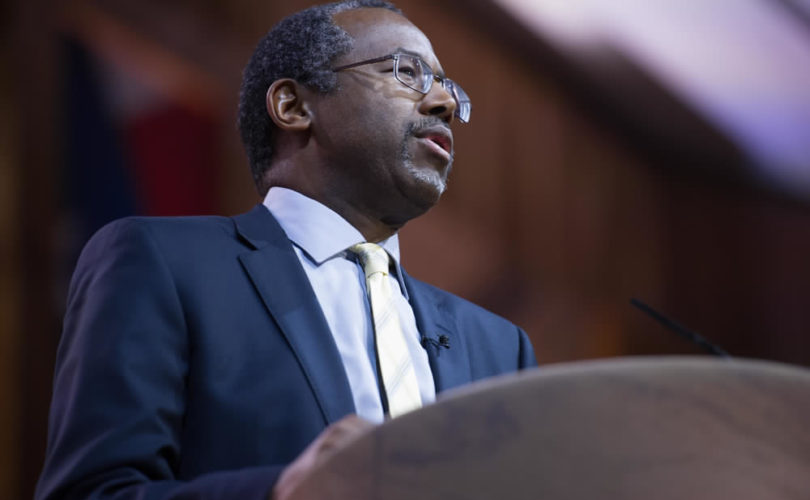 WASHINGTON, D.C., August 11, 2015 (LifeSiteNews) – Presidential candidate Ben Carson has said the argument that abortion is necessary to save the life of the mother is “spurious.”

Carson was asked about a statement from Hillary Clinton, which condemned 2016 Republican presidential hopefuls for saying “outrageous” things about women's health.

“I spent my entire career as a pediatric neurosurgeon, frequently staying up all night, fighting, struggling to save the lives of little babies, even operating on babies inside the womb. So, I don't think it should be hard for anybody to understand that I am totally opposed to killing babies,” he said.

O'Donnell followed up by asking, “I looked at your website and it wasn't clear on your website. You are opposed to all abortions, even in the case of life of [the] mother?”

“When it comes to the case of the life of the mother, you have to look at the individual situation,” Carson replied. “Recognize that that is largely a spurious argument, because we have advanced so much in medicine these days that that situation rarely occurs.”

He is the second candidate to explicitly reject an exception on the grounds of maternal mortality in a week. During last Thursday's debate, Wisconsin Gov. Scott Walker said that “there are many other alternatives” to abortion “that can also protect the life of that mother. That’s been consistently proven.”

Doctors in the United States and around the world, especially Ireland, have agreed that physicians must attempt to save the lives of both mother and child.

Hundreds of medical professionals have signed the Dublin Declaration on Maternal Health, which states, “As experienced practitioners and researchers in obstetrics and gynaecology, we affirm that direct abortion – the purposeful destruction of the unborn child – is not medically necessary to save the life of a woman.”

The Declaration, issued in 2012, came 20 years after the leading OB/GYNs of Ireland promulgated another statement that read, “We affirm that there are no medical circumstances justifying direct abortion, that is, no circumstances in which the life of a mother may only be saved by directly terminating the life of her unborn child.”

Groundbreaking scientific advances have made it possible for mothers facing cancer, for example, to give birth to healthy babies while using certain drugs during chemotherapy.

Dr. Carson strongly rejected Hillary Clinton's notion that he should be considered a sexist by association with the GOP.

“It was a woman, my mother, who’s responsible for my success, and I have the most wonderful wife,” he said. “In my medical career, I had terrific female physician assistants, and administrative people who I could not have succeeded without.”

How Hillary Clinton would portray him as a misogynist, “I don’t know.”

A Gravis Marketing poll the day after the debate showed that most Republicans (22 percent) believed that Carson won the prime time debate, while Carly Fiorna won the 5 p.m. debate at Quicken Loans Arena in Cleveland.

Carson's debate performance has earned him a new prominence in the crowded Republican field. According to a new NBC News/Survey Monkey opinion poll, Carson is now third place out of the 17 presidential hopefuls. Donald Trump slightly increased his lead, while Ted Cruz surged seven percentage points into second place.

Jeb Bush, whose campaign has raised more than $119 million mostly in large donations from major donors, had ranked second before the debate. He now ranks sixth.

After backlash for calling homosexuality a ‘choice,’ Ben Carson trumpets his support for gay civil unions