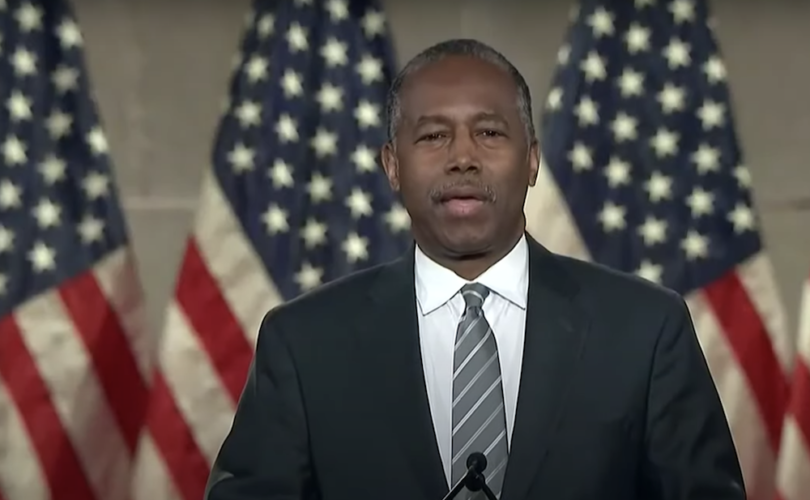 “What is racist is the fact that African Americans have the highest abortion rate,” Carson declared during his speech. “President Trump is the most pro-life president in our country’s history. He will continue to fight for those who cannot yet speak.”

The remark followed a broader refutation of the common left-wing accusation that Trump is somehow a racist.

“Years ago, Jesse Jackson gave Donald Trump an award for the economic opportunities he created for black people,” Carson said. “In Palm Beach, Florida, Donald Trump led the crusade to allow blacks and Jews into private clubs and resorts. One of the first things he did as president was bring the Office of Historically Black Colleges and Universities into the White House so that it could get proper attention and financial support. Before the pandemic, African-American unemployment was at an all-time low.”

Carson also offered a more general summary of what he believes to be the president’s true nature.

“Our president, Donald J. Trump, believes in the people. He is one of us,” Carson said. “He makes promises, and he keeps them. He is transparent, and we certainly know what he’s thinking. He does not submit to political correctness or to its enforcers, the media. He is real. Right now, we need real. We need courage.”

An estimated 40 percent of all U.S. abortions are sought by black women, ending more than 344,800 black lives every year. By contrast, the Ku Klux Klan and other racists are calculated to have killed a total of 3,446 blacks by lynching over an 86-year period. Yet Black Lives Matter (BLM) officially supports “reproductive justice,” a euphemism for abortion.

An esteemed neurosurgeon who served as director of pediatric neurosurgery at the Johns Hopkins Children’s Center before he entered politics, Carson has long been a voice for the preborn. At HUD, he has also worked to defend women from the ideology of gender fluidity by backing rules ensuring that HUD-funded shelters with single-sex restrooms, showers, or sleeping quarters may consider “privacy, safety, practical concerns, religious beliefs,” and an “individual’s sex as reflected in official government documents” in categorizing users.