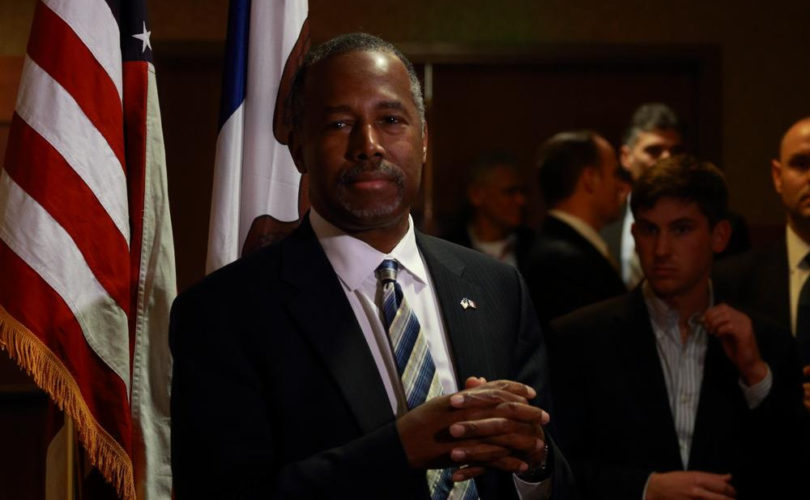 WASHINGTON, D.C., January 13, 2016 (LifeSiteNews) — Black GOP presidential candidate Ben Carson told EWTN that he would “set up a conflict with the Supreme Court” on abortion reminiscent of how “Abraham Lincoln was willing to engage in confrontation with the Dred Scott case.”

Earlier this week, Carson told Princeton professor Matthew Franck that he would back pro-life legislation declaring human life to begin at conception — which would put his presidency at odds with the U.S. Supreme Court's various pro-abortion decisions.

“Yeah, I would definitely be willing to engage in that kind of confrontation, very much the same way that Abraham Lincoln was willing to engage in confrontation with the Dred Scott case,” said Carson. “He felt that slavery was immoral, it was the wrong path to take, and the Supreme Court was defending slavery, as they've defended several things that were incorrect. We have a history that shows that they are not infallible, and therefore we should not simply submit to something that we know to be wrong. We should fight it.”

“There is not only the right to intervene, there is the duty to intervene,” Carson concluded, “particularly when new knowledge is discovered.”

“We have a history that shows that [the Supreme Court is] not infallible, and therefore we should not simply submit to something that we know to be wrong. We should fight it.”

In the same interview, Carson told Franck that he would oppose both redefining marriage and using the federal government to force school districts to let transgender students use facilities designed for the opposite sex.

“You see how silly this is,” he said. “I mean, it’s beyond ridiculous that you take the most abnormal situation and then you make everyone else conform to it. That doesn’t make any sense whatsoever.”

“That’s one of the very reasons that I have been an outspoken opponent of things like gay marriage. I don’t have any problem with gay people doing anything they want to do. You know, it’s a free country, there’s freedom of association. However, when you now impose your value system on everybody else and change fundamental definitions and principles of society, I have a big problem with that. Everybody is equal, everybody has equal rights, but nobody gets extra rights. And when we start trying to impose the extra rights based on a few people who perhaps are abnormal, where does that lead?”

“Boys who say, 'I feel like a girl today, I want to go into the girls' lavatory,' that is such a bunch of garbage!” said Carson. “If we continue to cater to that, where will it lead?”

“We are absolutely destroying ourselves because we are paying attention to political correctness.”