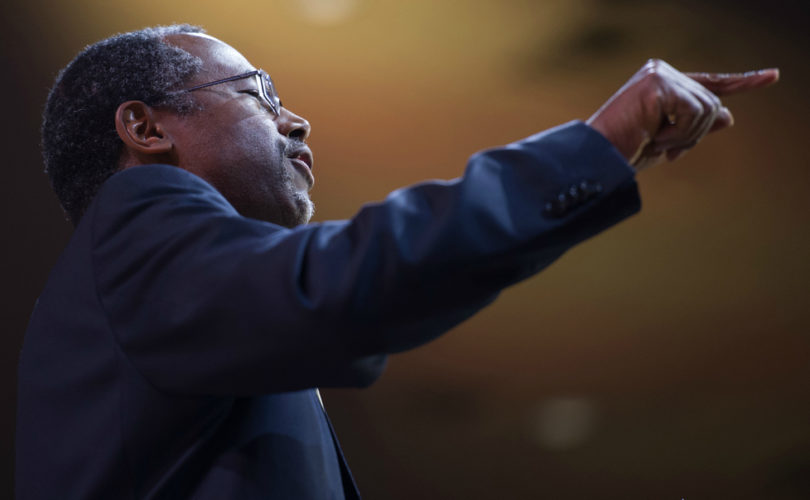 The neurosurgeon told journalist Jorge Ramos that he opposes redefining marriage, as well as including "gender identity" in civil rights ordinances.Shutterstock

WASHINGTON, D.C., November 9, 2015 (LifeSiteNews) – Dr. Ben Carson does not believe it would be “fair” for biological men to invade the privacy of women by using their restrooms.

The neurosurgeon told journalist Jorge Ramos that he opposes redefining marriage, as well as including “gender identity” in civil rights ordinances.

When asked about whether transgender men should be allowed to use the women's restroom, Carson replied, “How about we have a transgender bathroom?”

“It is not fair for them to make everybody else uncomfortable,” he said.

Ordinances like the one voters repealed in Houston on Tuesday would not only allow males to use women's restroom facilities but also locker rooms and showers. In California, an agreement brokered by the Obama administration allows a biological girl who says she is transgender to use male bathrooms and locker rooms, and spend the night in a teenage boys' hotel room during overnight field trips.

Carson said this was “one of the things I don't particularly like” about turning the civil rights struggle away from racial minorities with a centuries-long history of oppression toward a movement that celebrates lifestyle choice.

“I was a little bit irritated” by those “equating the whole [homosexuality] issue with the civil rights movement,” he said.

Former Democratic Congressman Artur Davis said that he and his fellow African-Americans “don't buy” the notion that “the gay struggle is the black struggle.”

Dr. Carson, a Republican, also opposed changing the thrust of the civil rights movement away from its original goal of equality under the law to government coercion, something he said was promoted by LGBT activists.

“I think everybody has equal rights, but I’m not sure that anybody should have extra rights – extra rights when it comes to redefining everything for everybody else and imposing your view on everybody else,” he said. “When the way that this country was designed, it was 'live and let live.'”

After backlash for calling homosexuality a ‘choice,’ Ben Carson trumpets his support for gay civil unions