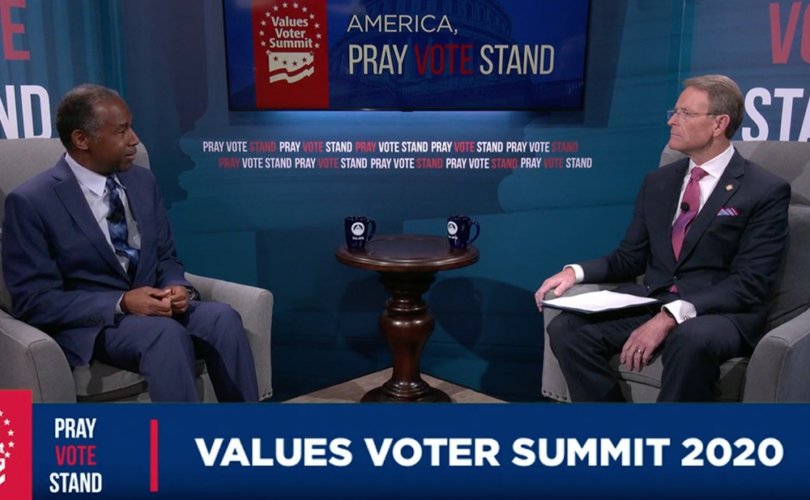 WASHINGTON, D.C., September 25, 2020 (LifeSiteNews) — Dr. Ben Carson said that despite the astonishing progress made in race relations during his lifetime, people are being divided during this election season in every way possible in order to create chaos as a means to force change.

“In this election season, everything is race and, obviously, it’s being manipulated along those lines, said Dr. Carson, the Trump Administration’s Secretary of Housing and Urban Development, at the Sept. 24 Values Voter Summit in Washington D.C.

“In order to create the kind of chaos that’s necessary to make people want a change, you divide them,” said Carson.  “You divide them in every way you possibly can, by race, by gender, by age, by income, and you see that happening.”

“We, the American people, are not each other’s enemies,” he declared, “and if you really were to sit most people down side by side and start talking about a lot of issues, you would find for the vast majority of people you agree on probably 90% of stuff.”

“But what they want to do is they take the 10% that you don’t agree on and they just try to foment that into the biggest thing in the world and keep throwing it in front of your face night after night, day after day,” he explained of the leftest-induced destructive urban civil unrest that has rocked the country in recent months.

“Look at corporate America —you know how they kind of fall in line and submit to Black Lives Matter and whoever else is holding the big stick over their head,” said Carson.

“Well, guess what?  If people of faith and people of principle begin to stand up for what they believe in, they will also start catering to them,” he asserted.

For the nation to move forward, “People of faith really need to ask themselves, what do they believe?” said Carson.  Specifically:

“We say we are one nation under God, and the real question is, is that true?” he continued.  “And are we a nation of faith?”

“Do we believe in godly principles of loving your fellow man and caring about your neighbor and, you know, developing your God-given talents to the utmost so that you become valuable to people around you having values and principles that guide your life?” he asked.

“Because if that is the case, all of these problems can be rectified.  If that is not the case, we will go the way of every other nation that has rejected God.”