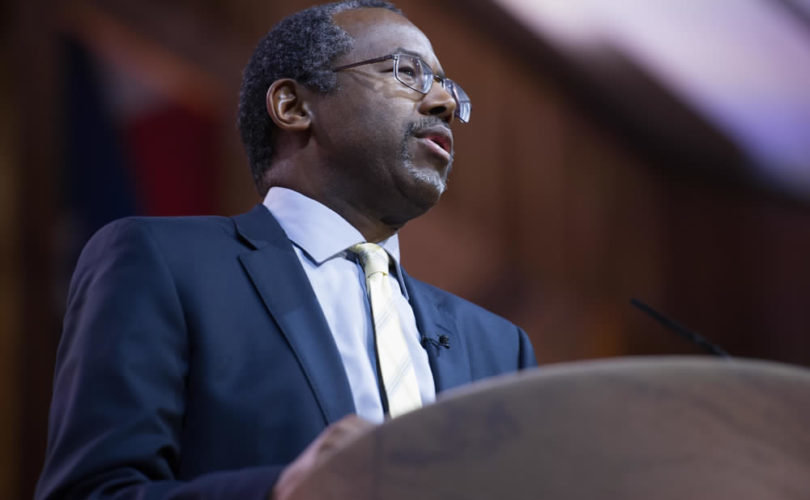 All Americans deserve protection under the law, Carson said, but no one is entitled to “extra rights.”

Questioned during the hearing by Ohio Democrat Senator Sherrod Brown on whether he would enforce protections for LGBT Americans in public housing, Carson reconfirmed his previously stated belief.

“Of course, I would enforce all the laws of the land,” Carson said. “Of course, I think all Americans should be protected by the law.”

He then added, “What I have said before is I don’t think anyone should get ‘extra rights.’”

Carson made the same point in a 2014 speech at CPAC, a major conservative conference, earning the ire of LGBT and gay “marriage” advocates the year before the June 2015 Obergefell v. Hodges Supreme Court ruling legalizing homosexual “marriage.”

“Of course gay people should have the same rights as everyone else,” he said at the time. “But they don't get extra rights. They don't get to redefine marriage.”

The retired neurosurgeon and former GOP presidential candidate has spoken frankly about homosexuality and other issues in the past.

He faced backlash in 2015 for saying homosexuality was a choice. Later the same year when asked by a journalist if transgender individuals should be allowed access to the restroom of the opposite sex, he replied, “It is not fair for them to make everybody else uncomfortable.”

“For thousands of years, mankind has known what a man is and what a woman is, and now, all of a sudden we don’t know anymore,” he stated. “Now, is that the height of absurdity?”

Carson first came to political prominence in 2013 when he criticized Obamacare while giving the National Prayer Breakfast keynote address with Obama on the stage beside him.

That same year the longtime director of pediatric neurosurgery at the Johns Hopkins Hospital stepped down as commencement speaker for the university’s School of Medicine and School of Education graduation after anger from homosexual activists over comments he’d made defending marriage.

“Marriage is between a man and a woman,” Carson told Fox News host Sean Hannity. “It’s a well-established, fundamental pillar of society and no group — be they gays, be they NAMBLA, be they people who believe in bestiality, it doesn’t matter what they are — they don’t get to change the definition.”

A former GOP presidential rival to Trump, Carson was one of the first to support the president-elect as the presumptive Republican nominee after dropping out of the race in March.