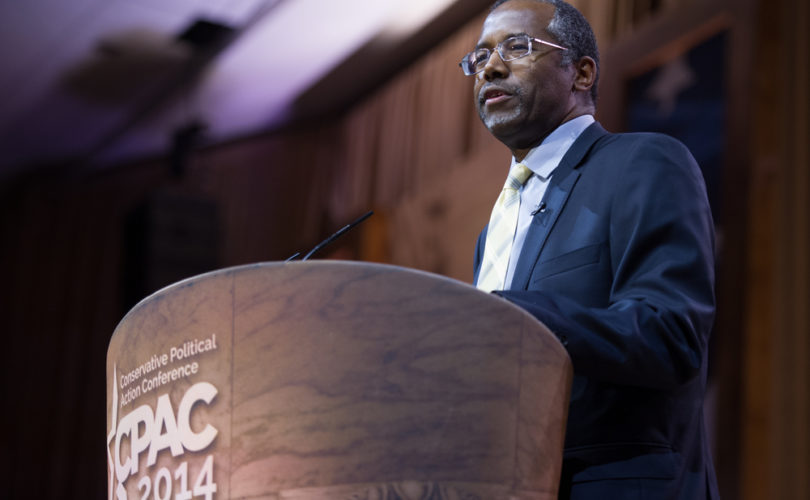 WASHINGTON, D.C., August 14, 2015 (LifeSiteNews) – Republican presidential candidate Ben Carson denies that he personally handled the remains of aborted children during a medical research project – while defending the use of aborted babies' cells for such research.

The blog of an OB/GYN who supports abortion on demand revealed that Dr. Carson took part in a 1992 experiment that used cells taken “from two fetuses aborted in the ninth and 17th week of gestation.”

Thursday night, Dr. Carson denied that he was “in the laboratory actually doing the research, or retrieving fetal tissue.”

“My only involvement in this study was supplying tumors that I had removed from my patients. Those tissue samples were compared to other tissue samples under a microscope,” he said.

“The fetal tissue that was viewed in this study by others was not collected for this study,” he added.

Fetal tissues used by researchers can “come from a variety of different places, ectopic pregnancies, spontaneous abortions,” as well as elective abortions.

“But,” he said, “just because they get the fetal tissue [by abortion], does it mean they should throw it out? Of course they don’t.”

“That’s how science is advanced,” he said.

Carson further told CNN during a stop in Manchester, New Hampshire, “To not use the tissue that is in a tissue bank, regardless of where it comes from, would be foolish. Why would anybody not do that?”

However, many bioethicists – and the doctrine of the Roman Catholic Church – would disagree that it is morally permissible to participate in any study using cells obtained by elective abortion…even if the aborted remains were supplied by others.

The Vatican's Congregation for the Doctrine of the Faith wrote that medical professionals have the “duty to refuse to use such 'biological material' even when there is no close connection between the researcher and the actions of those who performed…the abortion.”

“This duty springs from the necessity to remove oneself, within the area of one’s own research, from a gravely unjust legal situation and to affirm with clarity the value of human life.” (Emphases in original.)

A declaration by the Pontifical Academy for Life asked, “Is it morally licit to use [embryonic stem] cells, and the differentiated cells obtained from them, which are supplied by other researchers or are commercially obtainable?”

“The answer is negative,” it concluded.

Such an action would represent “a proximate material cooperation” in an immoral action.

The theologian Lucas Pollice wrote, “The use of stem cells for medical research that have been obtained from the deliberate and violent destruction of human life is also absolutely morally unacceptable.”

Research related to the destruction of innocent human life, Pope Benedict XVI said during his pontificate, “is not truly at the service of humanity. In fact, this research advances through the suppression of human lives that are equal in dignity to the lives of other human individuals and to the lives of the researchers themselves.”

Carson had previously upheld the use of RU-486, also condemned by pro-life and Roman Catholic ethicists. However, the retired neurosurgeon tied among likely Iowa caucus goers as the Republican most trusted on abortion, alongside Gov. Mike Huckabee.

And the candidate Republican voters most trust on abortion is….