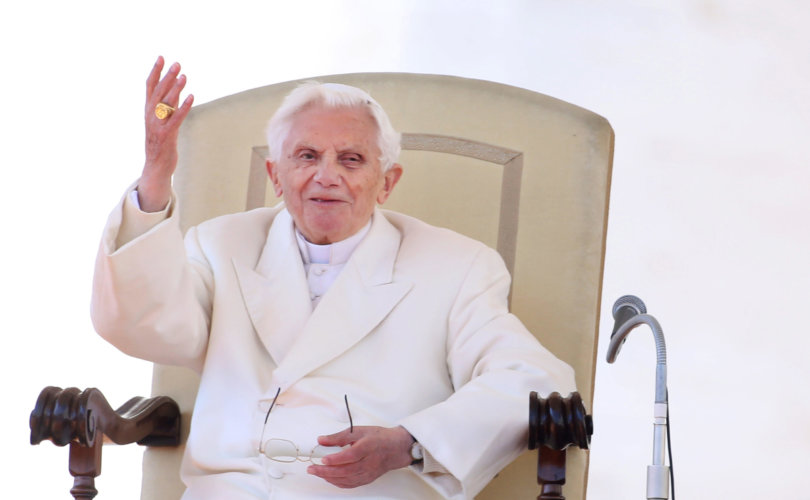 VATICAN CITY (LifeSiteNews) — In a newly released book, Pope Emeritus Benedict XVI defended traditional Catholic teaching on marriage and the family, describing the widespread institution of homosexual “marriage” in Europe as fomenting “a cultural revolution that is opposed to the entire tradition of humanity.”

The former pontiff made the remarks as part of an introduction to the Italian book “The real Europe: Identity and Mission,” some introductory pages of which were published by Italian newspaper Il Foglio on September 16.

Benedict argued that “the legalization in 16 European states of ‘homosexual marriage’” has led to a “deformation of conscience” that extends beyond the secular realm, having “penetrated deeply into the world of marriage in sectors of the Catholic people.”

As such, “the issue of marriage and the family has taken on a new dimension that certainly cannot be ignored.”

“This cannot be responded to with some petty moralism and not even with some exegetical references,” the Pope Emeritus said, adding that “[t]he problem goes deep and therefore must be addressed in fundamental terms.”

In line with historic Church teaching, Benedict affirmed that mankind, “in the mode of male and female, is ordered to procreation, as well as the fact that the community of male and female and the openness to the transmission of life determine the essence of what is called marriage.”

Benedict noted that despite some variance throughout history regarding monogamy and polygamy, the true nature of marriage being the union of man and woman for the purpose of creating offspring is “an orthodox certainty that until now has been obvious to humanity.”

Accordingly, the former Pope stated that “the concept of ‘homosexual marriage’ is in contradiction with all the cultures of humanity that have succeeded each other until today,” and that the legalization of same-sex “marriage” is part of “a cultural revolution that is opposed to the entire tradition of humanity.”

This “cultural revolution,” Benedict said, “was introduced when, with the [contraceptive] pill, the separation of fertility and sexuality became possible in principle,” and that this “new message, contained in the invention of the pill, has profoundly transformed the consciousness of men.”

Benedict said that “[t]his separation means, in fact, that in this way all of the forms of sexuality are equivalent,” giving rise to the modern concept of homosexual unions.

Pope Francis wrote an introduction to Benedict’s new book, seemingly supporting his predecessor’s pronouncement on the nature of marriage and the “deformation of conscience” inculcated by so-called same-sex “marriage.”

“[B]eing lost increasingly in today’s Europe is the idea of respect for all human life,” Francis wrote, “beginning from the loss of the awareness of his sacred character, that is, from the darkening of the consciousness that we are God’s creatures.”

“Over the course of many years, Benedict XVI has not been afraid to denounce, with great courage and farsightedness, the many manifestations of this dramatic rejection of the idea of creation, up to the current and ultimate consequences, described in an absolutely clear and convincing way in the text I introduce.”

During an in-flight interview on September 15, upon his return from visiting Hungary and Slovakia, the Pope had remarked that “states have the possibility of civilly supporting” homosexual couples, though he confirmed Church teaching that such couples cannot enter into matrimony.

Francis argued for the importance of helping those who desire to enter same-sex unions, defending the power of the state to establish civil partnerships.

While seeming to advocate that “[t]here are civil laws that provide if they want to associate,” the Pope stressed that the Church should not be made to “deny her truth.”

“Many, many people of homosexual orientation approach the Sacrament of Penance, they approach to ask priests for advice, the Church helps them to move forward in their lives. But the sacrament of marriage is something else,” he said.

Francis has promoted same-sex civil unions in the past, making his strongest statement on the issue last year in the documentary film Francesco, in which he stated, “What we have to create is a civil union law. That way they are legally covered. I stood up for that.”

Catholic commentator Br. Martin Navarro Ob.S.A. warned that Francis’ support for same-sex civil unions could be seen as “tacitly equating a same-sex union with a family.”

The Church has already considered the question of same-sex unions in civil law, notably in the Congregation for the Doctrine of the Faith’s (CDF) 2003 document “Considerations regarding proposals to give legal recognition to unions between homosexual persons.”

At that time the CDF, headed by then-Cardinal Joseph Ratzinger, reiterated that “homosexual acts go against the moral law,” instructing that “all Catholics are obliged to oppose the legal recognition of homosexual unions.”

In conclusion, the CDF stated that the Church “teaches that respect for homosexual persons cannot lead in any way to approval of homosexual behaviour or to legal recognition of homosexual unions.”

“Legal recognition of homosexual unions or placing them on the same level as marriage,” the document continued, “would mean not only the approval of deviant behaviour, with the consequence of making it a model in present-day society, but would also obscure basic values which belong to the common inheritance of humanity.”