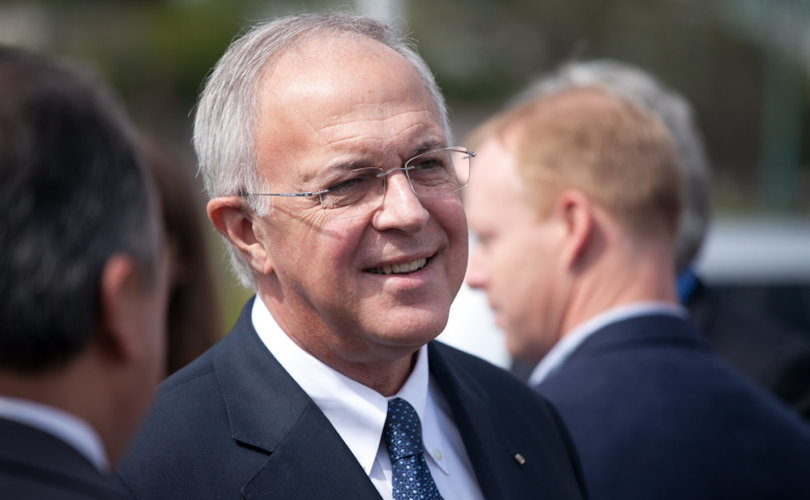 Knights of Columbus Supreme Knight Carl Anderson joins a rally in support of the Little Sisters of the Poor at the Supreme Court.American Life League

SASKATOON, Saskatchewan, February 9, 2017 (LifeSiteNews) — A Catholic newspaper that ran a column slamming the Knights of Columbus for being “anti-choice” rather than “pro-life” has justified its decision by pointing to Pope Francis. The column singled out Supreme Knight Carl Anderson for specific criticism charging him with being influenced by Mother Teresa's “simplistic” views. It also claims the Knights “financed” Mother Teresa's beatification.

“As you know, the pope has expanded pro-life beyond just the anti-abortion movement,” Abbot Peter Novecosky, international editor of the Prairie Messenger, told LifeSiteNews.

“You’re not aware of this?” he added. “I would suggest maybe you just read some of his stuff, his encyclical Laudato Si’ for example, on the care of creation.”

The Prairie Messenger is published by the Benedictine monks of St. Peter’s Abbey in Muenster, Saskatchewan. Abbot Novecosky ran an article by Yvonne Zarowny on January 25 that he titled “Pro-life groups need to expand their horizons beyond anti-choice.”

In her column, Zarowny identifies the Knights of Columbus as among the “power groups” that are “limiting ‘pro-life’ to ‘anti-choice’ legislation.”

“How and why is this happening — even with Pope Francis?” she questioned.

“The 2015 Laudato Si’: Caring for Our Common Home basically restates the unanimous conclusions of the UN’s World Commission on Environment and Development (WCED) 1987 report, Our Common Future,” she added.

Abortion is “in reality a legal regime that has resulted in more than 40 million deaths,” and not “just another political issue,” he stated then.

“What political issue could possibly outweigh this human devastation? Abortion is different. Abortion is the killing of the innocent on a massive scale,” observed Anderson.

“We will never succeed in building a culture of life if we continue to vote for politicians who support a culture of death,” he added.

Zarowny wrote that in “trying to understand why Supreme Knight Carl Anderson made statements he did during the horror show of the 2016 U.S. election cycle, I read a number of his publications.”

Anderson has been “influenced” by the “simplistic views” of St. Teresa of Calcutta, she revealed.

“He repeatedly quotes her statements that abortion is the ‘worst poverty’ and the ‘greatest threat to love and peace.’”

St. Teresa’s views on abortion explain “why so many wealthy promote her and the Knights’ model of ‘charity’ and why they financed her beatification,” wrote Zarowny.

“It doesn’t threaten their positions of power, wealth and privilege as co-creating authentic sustainable cultures of life would.”

The Knights of Columbus is an “incredibly powerful organization” which “is expanding its power and influence around the world while spreading the ‘American gospel’ of unrestrained capitalism,” she asserted.

Added Zarowny: “It seems the multi-million dollar investment in cultivating anti-choice legislation as the ‘only’ pro-life issue has paid off to the detriment of hundreds of millions as well as future generations.”

The abbot said he used the term “anti-choice” in the headline because “I think people know what it means,” and “I’m saying that ‘pro-life’ is a wider term than just ‘anti-choice.’”

What Zarowny is “doing is, I think, what the popes are doing, is saying let’s broaden our thing to look at the whole way our economy treats people,” Novecosky said.

LifeSiteNews contacted Archbishop Donald Bolen of Regina, who “spoke with one of the Knights,” according to an email from his secretary. She added the Knights “are writing a letter to the editor in response to the Zarowny article.”

State Deputy Brian Schatz confirmed with LifeSiteNews that the Saskatoon Knights Council had referred the matter to the state level, which intends to send “a bit of an official response.”

The Saskatoon K of C councils donate to a number of pro-life initiatives, such as crisis pregnancy centres, Rachel’s Vineyard, Teen-Aid, and Fountain of Hope through its In Support of Life Committee.

According to treasurer John Cook, the Saskatoon In Support of Life Committee donated $17,000 to pro-life groups last year, and he estimated individual councils donated an additional $3,000 directly to these ministries.

Louis Roth, president of Campaign Life Coalition Saskatchewan, says Zarowny’s column “just shows so much shallowness on her behalf as to what pro-life is all about.”

Added Roth: “Whenever I read the Prairie Messenger, there is usually an article that makes my blood boil, and the article by Zarowny is one of them.”

The Prairie Messenger has a circulation of 4,200 and states in its editorial policy that “[t]rue to its Catholic tradition,” it “seeks to mirror for the church on the Prairies the whole reality of the pilgrim People of God … ”

But the newspaper has a history of minimizing the Church’s opposition to abortion, notably running Michael Coren’s May 2015 column in which he declared a 10-year-old Paraguayan girl who conceived as the result of rape should have been allowed to abort her child.

The Prairie Messenger dropped Coren as a columnist after initially defending him.

It also refused to run the Campaign Life Coalition voter guide in October 2015 because it judged one of the pro-life candidates had a position on refugees that was too controversial.

Cardinal Joseph Ratzinger, later Pope Benedict XVI, noted in 2004 that “not all moral issues have the same moral weight as abortion and euthanasia.”

In a memorandum outlining general principles for worthiness to receive Holy Communion, Cardinal Ratzinger, then prefect for the Congregation for the Doctrine of the Faith, stated: “There may be a legitimate diversity of opinion even among Catholics about waging war and applying the death penalty, but not however with regard to abortion and euthanasia.”