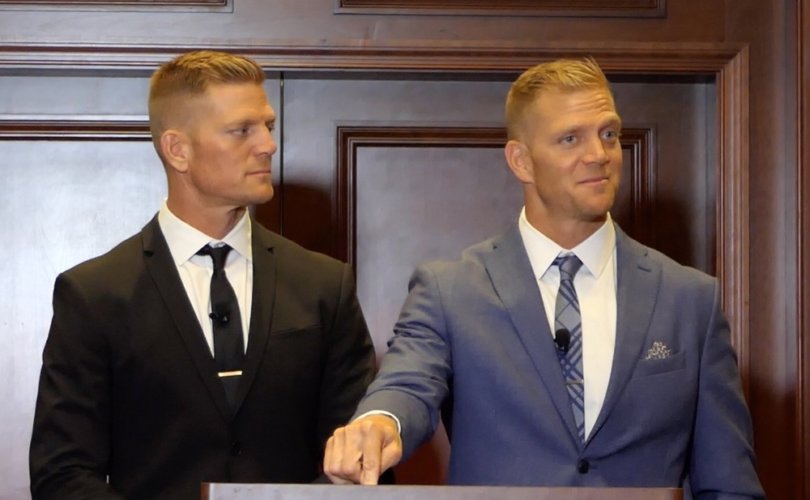 September 20, 2017 (LifeSiteNews) — Christians who grew up thinking about a candle’s light when singing “This little light of mine, I’m going to let it shine” have entirely the wrong idea about what it truly means to be a Christian light shining in the world, said the Benham brothers in a recent talk.

The identical twin brothers, speaking at the LifeSiteNews 20th anniversary Gala recently in Herndon, Virginia, said that most think of a candle’s flame when singing the lines from the song about not letting Satan “blow it out.”

“You see, the same wind that extinguishes the candle’s light ignites the coal’s light,” said Jason.

“What’s the difference between a candle and a coal?” he asked. A candle is lit from the outside while a coal burns from the inside,” he continued.

Jason quoted from the prophet Jeremiah (20:9) who called the word of God in his heart a blazing “fire” that could not be contained inside himself.

“Do you know how God gets the light that’s inside of you out into the world?” asked Jason. “He puts you in situations and around people in certain contexts where the devil is trying to extinguish your light. And the very act of the devil blowing as hard as he can to extinguish your light will actually ignite the light that’s already inside of you.”

Jason said Christians must become on fire for the faith like a “coal” so that they can “burn brightly” for Jesus.

But David pointed out how the “wind of culture is blowing” in an attempt to extinguish Christian lights. The wind comes in the form of politically correct pressures to accept “gay marriage,” “abortion on demand,” and “rampant perversion.”

Many Christians, David said, have unfortunately fallen for the trap of hiding their light under a basket “whenever it is not convenient” for them to shine in the darkness.

The brothers related how they themselves fell into the trap of turning off their own lights when they were first approached by home improvement television network HGTV a few years ago to film a reality show based on their wildly successful real estate business.

But in doing background checks on the brothers, HGTV lawyers discovered an article by pro-homosexual website Right-Wing Watch that accused the brothers of being “anti-gay, anti-Choice extremists.”

When the show’s producers asked the brothers if they were “anti-gay,” the brothers thought they were going to lose their chance at making the show. They related how they immediately began to experience a “heaviness” and a “fear.”

The brothers decided to draft an email to HGTV based on what they called a “man-pleasing spirit.” They outlined their Christian belief in marriage, stating, however, that when representing the HGTV network, “we’ll be quiet about [our beliefs].”

But before sending the email to HGTV, the brothers decided to run it by a spiritual mentor.

“Three minutes later [our mentor] sent an email back saying: ‘How dare you boys write an email like this. … You don’t even know who you are anymore. … How do you know that God hasn’t put you in this situation to tear down the stronghold that’s ransacking this nation? People are operating in fear, and now you are too. You both need to repent.”

The brothers said the mentor’s words pierced them. They immediately got down on their knees and begged God to forgive them for being so “blind” and willing to “betray” the Lord by being quiet about His truth.

The brothers went on to explain the essence of the trap they had fallen into.

The brothers gave an example of how this trap works in the real world. They said if a religious leader refuses to speak Biblical teaching about homosexuality from the pulpit because he’s afraid of retribution or losing his congregation, then he has fallen into the trap of “operating out of the fear of man instead of the fear of God.”

Such a religious leader is “enslaved” and must learn to let go of his man-pleasing spirit, said Jason.

The brothers said that falling into the “man-pleasing” trap taught them a crucial lesson in how to be a real Christian. They realized that the moment a Christian begins to focus on the “platform or the promise … or whatever it is” instead of the person of God who put it there in the first place, such a Christian begins to operate according to human strategies, not according to God’s ways, which are found “spiritually in the heart.”

“Strategies are good, but they have to follow the Spirit,” said Jason.

The brothers never sent the email. A few weeks later, HGTV contacted them to sign the contract for the show. The brothers were already months into filming and the first episode was about to run when the network suddenly capitulated to homosexual-driven attacks against the twins and decided to cancel the show.

When HGTV informed the brothers of the decision to cancel, the brothers realized that the time had come for them to let their light shine by taking a bold stand for the Lord and his truth about marriage and the family.

“[We realized that] this is a ‘bully agenda’ that will not go away, and that it is bullying every single person of faith into submission,” said David.

As the brothers encountered the winds of opposition blowing on them because of their Christian beliefs, they experienced the inner coals of their faith ignite into a blazing flame.

They went on to appear in about 200 interviews with major television networks and radio programs across the country where they spoke in defense of their Christian beliefs on marriage and the sanctity of life.

They would never have been able to proclaim God’s truth so widely and effectively to so many people had they surrendered to their fear and compromised on their faith by deciding to be quiet about their beliefs.

Jason explained that Christians will only begin to be a blazing coal of light in the culture when they surrender their dreams and ambitions to the Lord (their platforms and positions) and face their greatest fear.

The brothers said that when Christians are willing to face their fears and let everything go to follow the Lord, then they can expect miracles.

“Boldness [in facing your fear] precedes the miraculous,” Jason said.

“Let go of that thing you’re holding onto. Step out onto the field of battle and you do business with God,” he added.

David said all Christians, whether they be business leaders, stay-at-home moms, politicians, or pastors, need to be “bold” today because “now is our time, this is our moment.”

“And we’ve got to embrace this [fight], whatever the cost,” he said.