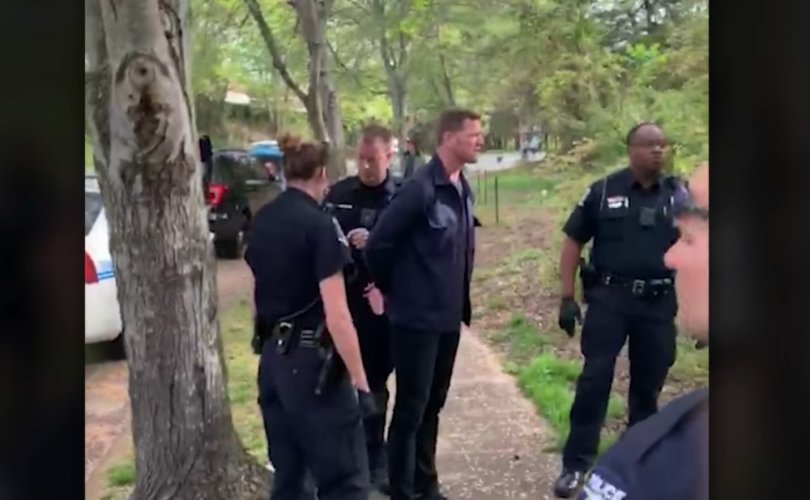 The Benham Brothers, David and Jason, gained significant media attention in 2014. At the time, HGTV canceled a proposed reality TV show that was going to feature the pro-life and pro-family evangelicals. Left-wing activists had complained about the brothers’ biblical views on marriage. Each episode would have shown the brothers helping down-on-their-luck families purchase a dream home they thought they could never afford.

According to The Daily Caller, David Benham “received a call from some of the sidewalk counselors Saturday morning saying there were police outside Preferred Women’s Health Center.” The sidewalk counseling was done by members of Cities4Life Charlotte, a pro-life group co-founded by Benham in 2010.

A video released by the Benham Brothers on Twitter shows Benham arguing with a police officer before being arrested. “In the middle of all this, 2 mothers chose life and have been plugged into the network of care,” the Benham brothers announced on Facebook.

“We are an essential federally recognized non-profit charity that helps at-risk mothers and babies,” Benham explained to the officer. “We are within our rights to be here. We are practicing social distancing, we have cleaned our hands, we are offering help to these mothers.”

An executive order issued by North Carolina Governor Roy Cooper on March 27 ordered all residents to stay at home during the COVID-19 pandemic, beginning March 30. However, a number of exceptions to the stay-at-home order were listed.

“Leaving the home and travel for Essential Activities is permitted,” the Governor wrote. Essential activities, as defined within the executive order, include volunteering “with organizations that provide charitable and social services.”

“Cities4Life had three members present at the clinic and a mobile ultrasound unit attended by two members, according to Benham, while about 15 police officers were at the scene,” The Daily Caller reported.

“By the time they took me away, there were individuals that came and showed up. But there was no organized groups of people,” Benham pointed out. “The Charlotte-Mecklenburg Police Department said there was a cluster, that there were 50 protesters. And of course, none of that is true.”

In a video posted by Cities4Life Charlotte on Facebook, the group’s Executive Director Daniel Parks clarified that members of Love Life, another pro-life organization based in North Carolina, “were going to come and pray.”

“Some individuals showed up to pray. Of course, we’re always thankful for that. And then the police began, after there were more than ten, to write them citations, and ultimately, ended up taking some folks to jail, unfortunately,” Parks said.

In his conversation with the police officer, Benham encouraged to law enforcement to verify compliance with social distancing requirements and mass gathering guidelines within the abortion mill.

“If you’re saying that we don’t have the right to be here, then go in the abortion clinic and make the arrests there,” he said.

The police officer claimed he did not have the authority to enter the abortion center.

“I appreciate that you’re serving. I appreciate everything that you do for us. But this is wrong, and you know it,” he added. “You cannot tell us to leave.”

“We are offering essential services to these mothers, and you know this,” Benham said before being led to the police car.

On the day of the arrest, Senator Ted Cruz took to Twitter to defend Benham.

“If NC deems abortion ‘essential,’ then pregnancy care services are as well. This is WRONG; Governor Cooper should be ashamed.”

“Because elected Dems are pro-abortion, they are abusing their power—in a one-sided way—to silence pregnancy counselors,” the Senator concluded.

Charlotte Mayor Pro Tem Julie Eiselt had forwarded a Tweet showing pro-lifers outside of the abortion center to the official account of the Charlotte-Mecklenburg Police Department.

Eiselt asked police to “please shut this activity down.”

.@CMPD please shut this activity down. Congregating/leaning into people’s car windows is dangerous and is a clear violation of stay-at-home regulations https://t.co/c7sB470zii

Less than two hours from Charlotte, in the city of Greensboro, North Carolina, pro-life activists of Love Life were arrested on March 28, and again on March 30, for allegedly violating the stay-at-home order in place during the COVID-19 pandemic by praying at abortion center A Woman’s Choice.

Several activists involved with Love Life went on to sue the local government of Greensboro for violating the group’s rights to walk and pray on the sidewalk outside an abortion center. They pointed out that the stay-at-home order “inflicts irreparable injury on the First and Fourteenth Amendment rights,” imposing “an unconstitutional restriction on constitutionally protected speech in traditional public fora.”