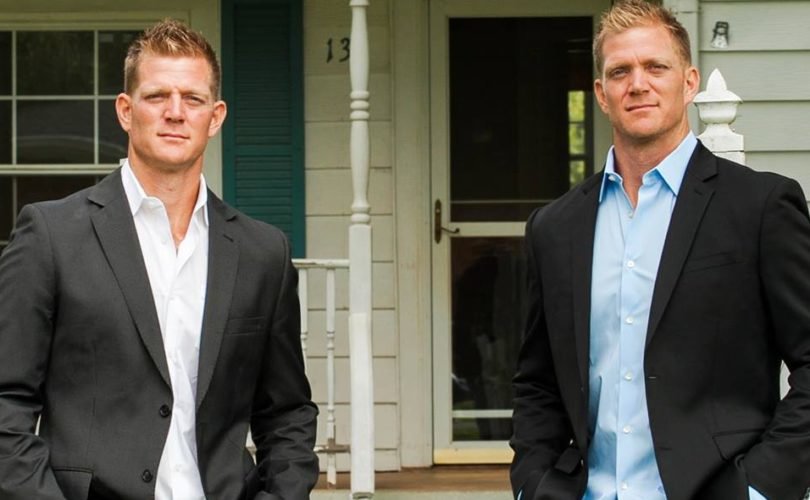 WASHINGTON, D.C., February 2, 2015 (LifeSiteNews.com) — Who are David and Jason Benham? Until about nine months ago, they were real estate business owners and entrepreneurs who promoted life and family with their respective spouses and children. Little was known about them besides their business savvy, entrepreneurial spirit, and the fact that each had been a professional baseball player.

That all changed last spring. After their pro-life and pro-family views became known through the liberal website Right Wing Watch, HGTV canceled the Benhams' reality TV show, “Flip it Forward.” Suddenly, the Benhams were known as “hateful” people by homosexual activists — but also as heroes to many social conservatives concerned that anti-Christian discrimination is seeping into America's culture, media, and government.

Nine months later, unbowed and unbroken, the Benham brothers have published Whatever the Cost: Facing Your Fears, Dying to Your Dreams, and Living Powerfully, a short treatise on how their relationship with God has shaped their childhood, family lives, career choices, and even the decision to stand strong when their show was canceled.

In September, David told LifeSiteNews, “It is an honor, with an eternal perspective, to lose anything for Jesus,” and later in the year the brothers backed LifeSiteNews' petition standing with the Duggar family against efforts to cancel “19 Kids and Counting.” Now, they've sat down with LifeSiteNews to talk about their book, which comes out on February 10, and how America can become a brighter, better country in the 21st century.

LifeSiteNews: Your book is titled, “Whatever the Cost,” and comes at a time when religious liberty is threatened in America. Do you believe America is heading in a direction where people will be asked to sacrifice everything for religious liberty, as we see in the Middle East and other places, and why or why not?

Benham Brothers: ​Pressure precedes persecution.  The pressure here in America will continue to get worse until men and women of faith decide to stand boldly whatever the cost.  If we sit silently by and do nothing, the pressure we're feeling today will result in persecution tomorrow.  Micah 2:6 says, “…But if they do not speak out concerning these things, reproaches will not be turned back.”  Apart from a divine move of God in this country, religious liberties will be taken from us if we don't take a stand now.  What's on the line are our children's liberties more than our own.  We need an awakening again to stir our hearts for the next generation.

LSN: Related, some people have been critical of your book's title, in light of the grave persecution facing Christians at the hands of ISIS and around the world. How would you respond to them?

BB: ​We address this very question in our acknowledgement.  What we experienced pales in comparison to those who have given their lives for the sake of the gospel.  One of our favorite passages of Scripture is the Hebrews 11 “hall of faith” that shows the great sacrifices of believers who gave their lives.  They've run their leg of the race, now it's time to run ours.  We pray that we would have this same courage that they had.

Yet the principle of living for Jesus whatever the cost transcends the level of persecution we do or don't experience.  Some may have to give up everything, others just a little bit, but either way every Christian must make a decision to stand whatever the cost.  That's what we hope our book encourages people to do.

LSN: The 41st March for Life just took place, and more than 200,000 Americans participated. Unfortunately, much of the mainstream media either ignored it or downplayed its significance. What are some ways — whether through social media, local media outlets, praying at abortion clinics, etc. — that pro-life Americans can spread the word about a culture of life and its importance to our nation?

BB: The age-old battle has always been over life.  Jesus comes to give life, Satan seeks to destroy it.  When men and women of faith stand boldly for life – especially for the voiceless unborn – whether or not the media covers it we're living in victory because we're walking in obedience.  In 1992 there were over 2,000 abortion clinics in America, yet today there are [less than 700] – despite a clear media bias against pro-life work.  We win either way.

An important point to make is that the media simply believes the church is irrelevant today.  One of the reasons why is because the church, as a whole, has existed quite peacefully with abortion-on-demand since 1973.  There have been a few remnants that have risen to be a voice for the voiceless, but by and large the church has remained silent.  As a result the church has lost its authority in culture.  As Dr. Martin Luther King Jr. said, “If the church does not recapture its prophetic zeal it will become nothing more than an irrelevant social club, lack moral and spiritual authority.”  Yet with or without the media we will win the battle for life as we simply obey God by being a voice for the voiceless – in whatever way He shows us how.

BB: HGTV is a company – they can hire/fire whoever they want if they feel the individual is detrimental to their bottom line.  We stand by HGTV in that regard, as we do every other company in America, including our own.

The government is our government – it creates the laws that protect religious liberty, and thankfully there have been no laws banning these freedoms to date.  Yet any law that threatens the freedom to live and work according to our beliefs should be rejected, not used as a weapon against freedom.

The days are rapidly approaching where our government may enact laws that ban the very freedoms that made our nation great.  The question is, will we defend them whatever the cost?

LSN: You spend a lot of time in the book discussing how your wives have put up with you for more than a decade of marriage. How did you win them over, how do you keep winning them over on a daily basis, and how important were they in supporting you throughout your baseball, post-baseball, and real estate careers, as well as what happened with HGTV last year?

BB: ​We actually wrote an entire bonus chapter dedicated to our wives.  Lori (David's wife) and Tori (Jason's wife) are amazing wives and mothers, and their desire is to build and strengthen the home – which we believe is the bedrock of society.  For our wives to put up with two highly ambitious, type-A personalities is nothing short of miraculous.  The one thing that saddened us about losing the show was that America missed out on two very special women who would've been incredible role models for young girls across America.  It's fun to see two classy women who homeschool their kids, work out consistently, love their husbands, and find their fulfillment in the home.