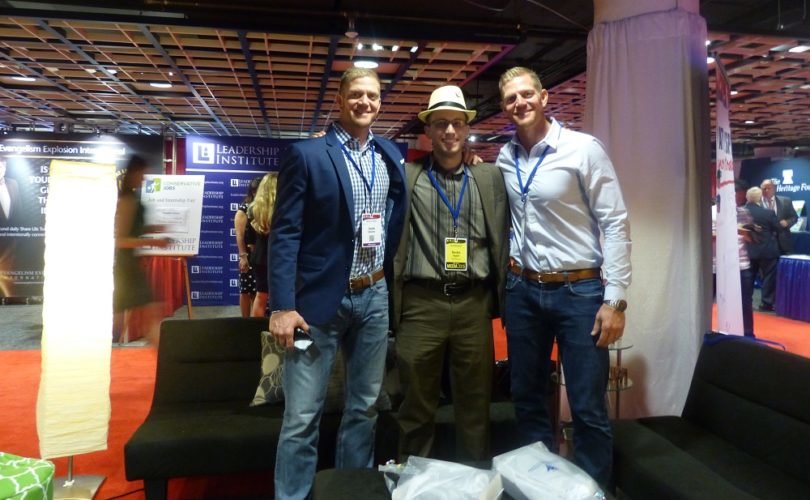 WASHINGTON, D.C., September 28, 2015 (LifeSiteNews) – “Sex is like a fire … inside of a fireplace,” says businessman and Christian culture leader David Benham. “But what happens when that fire jumps out of the fireplace and hits your blanket? It's destructive.”

At last week's Values Voter Summit, Jason and David Benham gave a wide-ranging interview with LifeSiteNews that, yes, did include comparing sex to a fire. But they also talked about religious liberty, the responsibility to produce instead of consume, and how they owe more than most to God and society.

Their interview can be seen in full, below, with light edits:

Asked about what they've seen in the last 12 months, since the last time they did a sit-down interview with LifeSiteNews, negatively and positively across America:

But we're seeing those cases basically double across the country. The Liberty Institute did some statistics, and they said it's over double those cases now, from this year to last year – and the year's not even over.

But the positive thing, as Jason and I travel the country, is we are seeing thousands and thousands of Christians and Americans that say, “You know what? I'm gonna take a stand. I'm going to quit being silent, I'm actually gonna enter the conversation, and I'm going to begin to let my voice be heard.” And what we encourage Christians, especially, is “really lead with brokenness. Lead with humility. Know what you're talking about. Get into the Word of God.”

Because this is life. This is something we truly believe to the depth of our being – if you don't have conviction about it, just spend some time in prayer before you join this conversation. It's exciting to watch what's happening.

On the active life versus the inner life, especially being square with God before speaking:

Jason: That's why we need to be always praying without ever stopping. That's being in a constant conversation with God. You think about Nehemiah, when the king said, “Why are you so sad?” And Nehemiah knew in that moment that this was his opportunity, and it says, “Nehemiah prayed.” What do you think? Nehemiah said, “Excuse me – I'll be back in five minutes”? No. In his heart. He's in a constant conversation with God.

Now, I'll show you how it works. It's called “mental conditioning.” We all know what that means.

I'm a married man. I am always, by God's Grace, thinking about my wife. I was eating lunch the other day, and I had a piece of salmon, and it was amazing. And you know the first thought that popped into my mind? “My wife would love this.”

Was I having a conversation with her? Yes and no. No, physically, but yes in terms of by the time I got home, I actually sent her a text, and said, “You would love this, this salmon that I am eating.” So I was with her, but I wasn't.

The same is true in the Lord, that we're in a constant state of communicating with God, all day long. And you know where it starts? Thanksgiving and praise.

You start with thanksgiving and praise. You get to the heart of a man, you thank him for what he's done, and you praise him for who he is.

So, you know, something very small – this morning, I had to use the bathroom really bad, and when I went into the bathroom, I said, “Thank you, Lord, that you've given me the ability to do this.” You know what? Because there are people who don't have that ability, and they're stuck in hospitals right now.

You see, it starts like that, so you're constantly having a communication session with the Lord, all day long, even when you're talking with people.

Asked about white privilege, male privilege, and the idea of tearing down accomplishments:

David: There's a Bible verse that says, “To whom much is given, much is required.” So if you're given much talent, if you've got a lot of it, then you have to give a lot more of yourself. The Bible also says, each of you should consider other people better than yourself. That's every person, including Donald Trump, including all of [inaudible].

Now, this whole “self-help” mentality that we've got, this “build your self-esteem”-type stuff is not healthy. When you get to that point, where you realize, “God made me, and He loves me, and He's given me talents and abilities so I can give those to others, because other people are valuable,” that is a supernatural way to live, whether you have money or not.

What I will say is that when we talk about leveling the playing field, and all of that other stuff – the key to a good race is to make sure that everyone starts at the same starting line. And then you go. And they finish at the same finish line – that's fair. That's fairness.

But what we want to do now is say, “No, no. You, sir, white man” or whatever it may be – Republican, or conservative, or all of this other stuff – “you have to start way back here, and this other person has to start way up there.” The problem is we can blame the government, but what we really have to do is look at the church, and blame ourselves first, because many Christians, over the years, and I've watched it myself, have been very blessed with a lot of success, have been very selfish. And as a result, it makes others want to limit their ability to do all of the other things they've had the freedom to do for so many years.

So we see that. So I think we've brought it upon ourselves. And I think one of the ways out of it is for those of us Christians, like me – I'm a white man, I'm a conservative, I'm a very successful entrepreneur, praise God – but I have an obligation to give back so much more, and to do much more, than what I believe many have done before me.

Responding to the idea that government programs are necessary to help people move up in society:

Jason: It's the difference between a producer and a consumer. Producers start businesses; they do things that actually produce for people. We don't think in terms of consuming; we don't look to the government to meet our needs, because then that would make us a consumer.

We look to ourselves to say, “What can my hands do, through the giftings that God has given me?” So God is the ultimate source. That makes us producers. And any time you've got folks sitting there, saying, “Hey, we need people to provide for us,” then that automatically makes us a consumer.

And the other thing is, we don't really have poor people in the United States, like they do overseas –

David: We have some of them.

Jason: But not to the extent they do overseas. So a truly poor person in the United States, let's say they break their leg and they don't have insurance – are they going to be able to get care at the emergency room? Of course.

Now, poor overseas, they can't get that type of stuff. [The poor] can get that all the stuff that they need here.

On how polls show the American people are less favorable toward religious liberty:

David: I would say a majority of Americans are actually in favor of [religious liberty]. But the media, LA, Hollywood, Washington, D.C., want to make it like they're not.

On how to talk about sex to the American public:

David: You know how we talk about sexuality? Sex is like a fire…inside of a fireplace – the proper boundary of sex. Think about this – you've got a fire in your fireplace in your house. Sitting there with your wife – it's romantic, it heats your food, warms your house.

But what happens when that fire jumps out of the fireplace and hits your blanket?

It's destructive. Sex is a fire only within the confines of marriage, between a man and a woman. Once that fire gets out of that, it doesn't matter if it's heterosexual or homosexual, it burns everything down, including society.

Benham Brothers challenge pro-life and pro-family advocates: ‘Let’s do this!’

Benham Brothers: ‘Every Christian must make a decision to stand, whatever the cost’ (INTERVIEW)