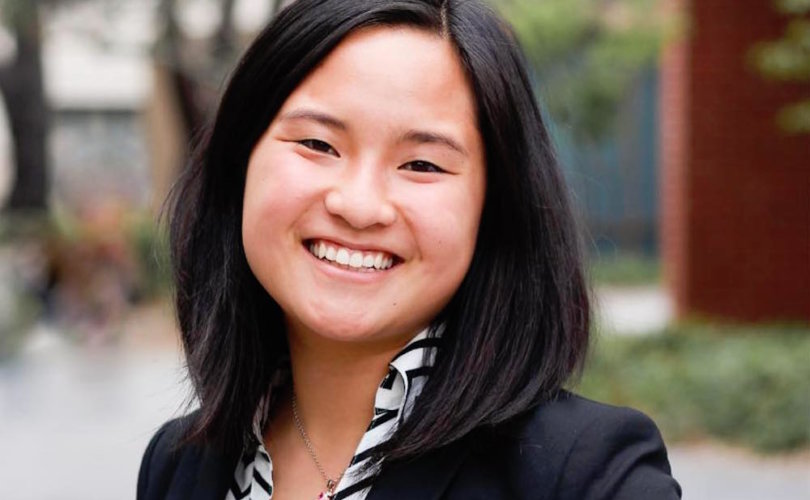 BERKELEY, California, November 14, 2018 (LifeSiteNews) – A Christian student senator at one of the United States’ most left-wing universities is facing intense hostility because she abstained from a vote condemning the Trump administration’s insistence that gender is based on science rather than “identity.”

On October 31, the Queer Alliance Resource Center (QARC) at the University of California-Berkeley called on the student Senate to pass a resolution condemning a Trump administration proposal to adopt a strictly biological definition of sex for the purposes of Title IX non-discrimination or government-assistance regulations.

The policy change would merely reflect scientific fact, but the resolution claimed it would “rob transgender, non-binary, and otherwise gender non-conforming students of their right to seek legal recourse for discrimination on the basis of their gender identity.” It also called on the school to “better publicize” several pro-LGBT groups as “resources” for students, including the National Center for Transgender Equality and Transgender Law Center.

Student senator Isabella Chow, a professed Christian and Class of 2020 double-major in business and music, abstained from the vote.

While declaring “love and compassion” for homosexual and transgender students and disavowing any “bullies and bigots” committing discrimination or harassment, she respectfully explained that ultimately the resolution would force her to “promote a choice of identities that I do not agree to be right or best for an individual, and to promote certain organizations that uphold values contrary to those of my community.”

“As a Christian, I personally do believe that certain acts and lifestyles conflict with what is good, right, and true,” Chow declared. “I believe that God created male and female at the beginning of time, and designed sex for marriage between one man and one woman.”

Her words were met with a range of hyperbolic reactions, the San Francisco Chronicle reports. Chow’s own campus political party, Student Action, formally “disaffiliated” itself from her for supposedly opposing the “rights and dignity of the Queer and Trans community on this campus.”

The editorial board of the left-wing student newspaper Daily California declared that “UC Berkeley students cannot allow and accept leaders like Chow to make decisions on their behalf” because she “used her powerful public platform to negate entire experiences and identities.” She submitted a response to the student paper, but was denied space to defend herself because of the “homophobic and transphobic” subject matter.

More than 100 students spoke out to protest Chow during last week’s senate meeting, while just three students spoke in her defense. QARC has gathered a thousand signatures demanding her resignation. There has also been talk of attempting to recall her from her seat, and ad hominem attacks against her have flown across social media.

“She could have merely abstained,” QARC president Regan Putnam told the Chronicle, accusing Chow of “shrouding hate in ‘love’” and claiming “nobody who voted ‘yes’ had to explain their vote.”

Chow told LifeSiteNews there is also a petition to defund Christian organizations on campus, that she’s been disaffiliated with almost every campus group without being given a chance to explain herself, and that she even had to cancel a piano recital for fear of protests.

“It's been difficult to say the least,” she told LifeSiteNews. “Ever since the morning after my vote, people recognize me when I walk around campus. Heads turn when I go to class. I was filming with an interviewer on the campus plaza this morning, and a passerby interrupted us and yelled, ‘Queerphobic senators must resign!’”

Chow told the Chronicle she feels “frustrated and sad that Berkeley students are forced to live in a bubble […] I go to classes, and people are looking at me. I’ve been painted in such a negative light.

“No matter how much I tried to say, ‘I can love you and still disagree with you,’ people still interpret my disagreement with being a bigot and a hater,” she lamented.

Despite the onslaught, Chow says it’s all happening for a reason, notes that the campus’ “extremely supportive” Christian community has sustained her through the storm, and declares she has no intention of resigning or backing down.

Chow told LifeSiteNews that she hopes her experience will help “spark dialogue about the intersection of faith and the LGBTQ+ community,” as she believes the church has often failed to strike a proper balance between love and truth. “What does it look like to love unconditionally while speaking the truth in love?” she asked. “What does it mean to serve the LGBTQ+ community while fully affirming the truths of the gospel?”

“I realize that behind all the hurtful words and anger spewed at me are wounded hearts and traumatic narratives that only God can redeem,” Chow said. “Through all this, I pray that the Lord would use my story to spark a greater dialogue that would cause the church to more deeply wrestle with how we can more deeply love our LGBTQ+ neighbors.”

“As a Christian, I believe that God redeems and he uses all situations for the good of those who love Him,” she told Campus Reform. “There is so much happening, and even though it's been a really, really rough week for me, I know that God is working and I know that he is using this to strengthen the church, to awaken the church in a sense.”

“I want to stand by my comments on last Wednesday when I said that my God is a God that loves. No matter how I'm treated, no matter how my community is treated, we want to be able to love unconditionally in a Christlike manner and to respond in a Christlike manner,” Chow continued. “There's a Christian community and campus that has been praying for me and encouraging me throughout all this. And if I don't represent their views, who else will?”