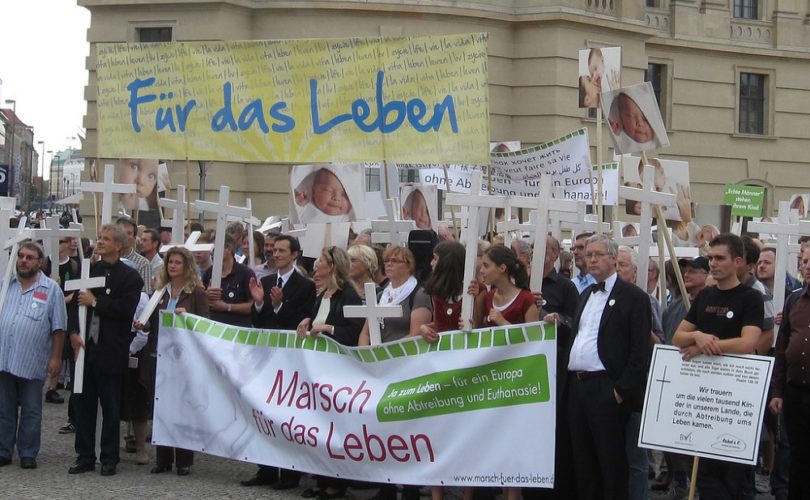 BERLIN, September 22, 2015 (LifeSiteNews) – On September 19, 2015 took place the yearly organized “March for Life” in the German capital city of Berlin. The aim is to protest both the ruling abortion laws and the attempts to legalize euthanasia in Germany. The organizer of this event is the “Bundesverband Lebensrecht” (Federal Pro-Life Association), which is directed by author and journalist Martin Lohmann.

According to the organizers, 7,000 defenders of life participated in the march. That means an additional 2,000 participants compared with 2014. The police counted 5,000 demonstrators overall.

The march in Berlin is by far the biggest one in Germany.

The post-communist party “Die Linke” (the left), together with many far-left groups, were called to disturb and even to block the march. According to the police, 1,700 leftists took part in these actions. Nine hundred police officers had to protect the pro-lifers during their walk, dissolving many blockades. Twenty-eight leftists were captured, and 14 police officers were injured.

The event began with some speeches of some distinguished personalities. Most prominent among them was the Protestant preacher Ulrich Parzany. Several people testified to their confrontation with abortion practices in Germany. A midwife explained how pain-sensitive the unborn child already is in the eighth week of gestation. A woman who performed an abortion described the pain of “post-abortion syndrome.” A mother of a child with Down syndrome narrated the unexpected joy of her own motherhood. A disabled man who needs a wheelchair, since he had tried to commit suicide, spoke emotionally against the attempts to legalize euthanasia.

Although the number of 7,000 does not sound impressive by American standards, with its size, the Marsch für das Leben in Germany attracts huge and growing media interest. Many days before the event took place, the march was an object of analysis by the main German newspapers. It was especially the reaction from the leftists that inflamed the debate.

The Marsch für das Leben received important support from other well-known  personalities. Pope Francis encouraged the organizers during his general audience of August 26. Many bishops sent letters of support, among them Cardinal Reinhard Marx of Munich (president of the German Bishops' Conference); Bishop Gregor Maria Hanke, O.S.B of Eichstätt; and the Apostolic Nuncio, Archbishop Nikola Eterović. The new Archbishop of Berlin, Heiner Koch, who was publicly introduced that same day, also sent greetings.

The most important Protestant support came from Bishop Frank Otfried July (Württemberg) and Bishop Carsten Rentzing (Saxony). However, Protestant participants expressed disappointment at the general passivity of their own most important bishops. The local church in Berlin even refused to distribute a handout with decisive and relevant information about the event.

The Marsch für das Leben in Berlin is not only the biggest and most well-known march in Germany, but the event that helps unite the pro-life movement of the whole country. Virtually every pro-life group and important life-defending personality supports the Berlin March for Life in some genuine way.

Pro-life efforts are ‘a powerful witness to your Catholic faith,’ London bishop says at March for Life mass
‘We can end abortion in our lifetime’: Canadian youth urged to promote right to life on eve of March for Life

Thousands march for life in Rome – joined by Cardinal Burke