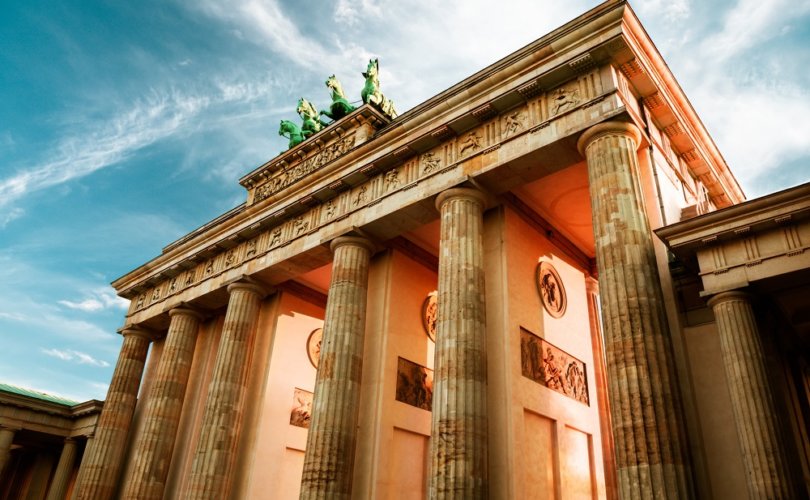 The Brandenburg Gate in Berlin.anyaivanova / Shutterstock.com

BERLIN, Germany, September 24, 2019 (LifeSiteNews) — A crowd of 8,000 including five Catholic bishops marched from Berlin’s city center to the Reichstag last Saturday to demonstrate their determination to protect the child in the womb.

The “impressive” turnout was the largest yet for the “Marsches für das Leben,” said Alexandra Linder, chairman of the Bundesverband Lebensrecht (BvL), which organizes the annual event that is renowned as Germany’s biggest pro-life march.

Participants carried balloons and signs declaring “Inclusion instead of selection — every human being is equally valuable” and “Baby selection is not a cash benefit,” according to Der Tagesspeigel.

In welcoming remarks, Bishop Stefan Oster of Passau described the more than 100,000 abortions a year that take place in Germany alone as a “terrible number,” and emphasized that every human being has the right to life from conception to natural death, Der Tagesspeigel reported.

Oster was joined by Bishop Rudolf Voderholzer of Regensburg, Bishop Wolfgang Ipolt of Görlitz, auxiliary bishop Matthias Heinrich of Berlin, and auxiliary bishop Florian Wörner of Augsburg, as well as Hans-Jörg Voigt, a bishop of the Independent Evangelical Lutheran Church, according to BvL.

Chairman for Doctors for Life Dr. Paul Cullen stressed the need to fight legalization of euthanasia, as did former member of the German Bundestag and disability commissioner Hubert Hüppe, who also exhorted the crowd to lobby politicians on behalf of the unborn, BvL reported.

Other March speakers included Leontine Bakermans from the Netherlands; Maria Grundberger, a pregnancy consultant in Switzerland; and nurse Antje Humpert, who told the crowd of her experience with the premature birth of her second child, diagnosed in utero with a disability. In the first-time Pro-Life Poetry Slam, Katharina Otto recited a poem about children with trisomy 21, entitled “All good things come in threes.”

The March concluded with an ecumenical service in front of the Reichstag during which Bishop Wörner emphasized the sacredness and inviolability of human life from conception, reported InfoCatólica.

About 400 abortion advocates held a counter-protest at Central Station calling for the decriminalization of abortion and carrying signs with such messages as “Support instead of criminalization” and “self-determination is a human right,” Der Tagesspeigel reported.

The health ministry must still approve the change, and it’s expected the precise conditions under which mothers would be reimbursed for eugenic prenatal testing will be drafted by 2020 to take effect in 2021, according to DW.com.

The decision has sparked controversy, with Alessander Krauss, a Christian Democratic Union member of the Bundestag among those warning of the consequences, according to InfoCatólica.

“The right to life of persons with disabilities is seriously damaged[.] … [O]nce it is discovered in the womb that the child comes with a disability, he is sentenced to death,” Krauss pointed out.

The German government “should think about financial aid and support for families with disabled children. The elimination of a group from our society is unjustifiable and absolutely unacceptable,” he said.

German abortion advocates have also been waging a long-running battle over Section 219a of the criminal code — consistently referred to in the mainstream media as a “Nazi-era law” or “Hitler-era law” — that bans advertising abortion.

The Bundestag relaxed the law earlier this year to allow doctors to advertise the fact that they commit abortions but not give any further details, as a Berlin court pointed out when it fined two German abortionists in June for advertising they did “medicinal, anaesthesia-free” abortions in a “protected environment,” reported the BBC. The abortionists are appealing the decision.

Under Germany’s criminal code Section 218a, unborn children can be aborted up to 12 weeks’ gestational age on the condition that the mother receives counseling at a state-approved center and observes a three-day waiting period. Abortion is also legal in later stages of pregnancy when deemed “a medical necessity.”