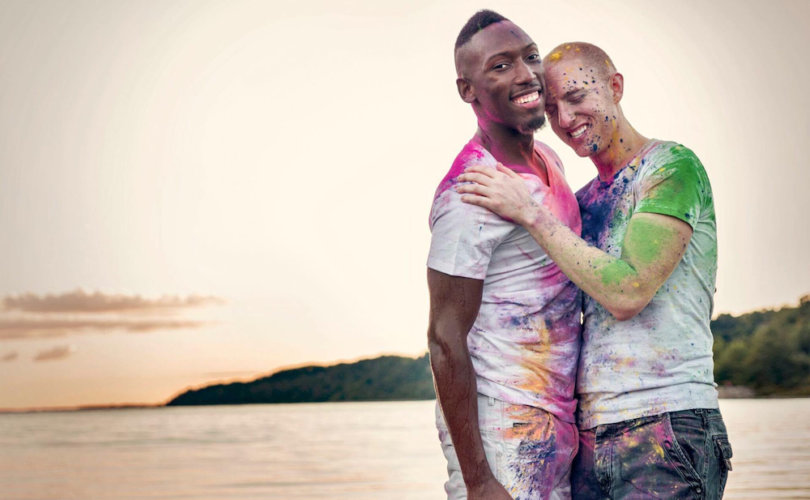 Winston Godwin and Greg DeRoche led the fight for gay 'marriage' in Bermuda.

BERMUDA, May 8, 2017 (LifeSiteNews) – The British island territory of Bermuda legalized same-sex marriage on Friday after a long legal battle.

Two men, Bermudian Winston Godwin and his Canadian partner, Greg DeRoche, took their case to the Supreme Court after Bermuda’s Registrar-General declined their application to marry on the island.

A crowded courtroom broke into applause when the judge ruled in in their favor, The Royal Gazette reported.

The couple contended that Bermuda’s Human Rights Act protected their right to marry.

“The ruling today is more than me and pieces of paper; it’s more than any of that, it is what it means for Bermuda moving forward,” Godwin said.

This is a big step in the right direction, he continued, with more to be done on LGBT issues.

“People are going to have their opinions about this and that is OK,” said Godwin. “I am not here to change people’s opinions or how they think. I just want them to respect me and my relationship and my marriage that will happen here.”

The law goes into effect immediately. Godwin said he and DeRoche will resubmit their marriage application to the Registrar-General “within days.”

The common law definition of marriage as the voluntary union for life of one man and one woman, and its reflection in existing matrimonial law “are inconsistent with the provisions of the Human Rights Act as they constitute deliberate different treatment on the basis of sexual orientation,” Judge Charles-Etta Simmons said in her ruling.

“In so doing the common law discriminates against same-sex couples by excluding them from marriage and more broadly speaking the institution of marriage,” she said. “On the facts of this case the applicants were discriminated against on the basis of their sexual orientation when the Registrar refused to process their notice of intended marriage.”

The pro-LGBT group Bermuda Rainbow Alliance praised the judge’s decision, calling the ruling a victory for “a brave young couple willing to fight for their love” and “all same-gender loving people in Bermuda.”

“Today, history has been made and love has won,” the group said in a statement.

The pro-marriage group Preserve Marriage in Bermuda criticized the ruling.

“Today a single judge, Justice Charles-Etta Simmons, of the Supreme Court of Bermuda has decided to redefine the institution of marriage,” the marriage group said in a statement. “By imposing this judgment, the court has ruled against many in the community of Bermuda.”

Bermuda voters overwhelmingly rejected same-sex “marriage” in a referendum last June 69 percent to 31 percent. The vote was null, however, since some three percent less than the required 50 percent of registered voters took part in the referendum.