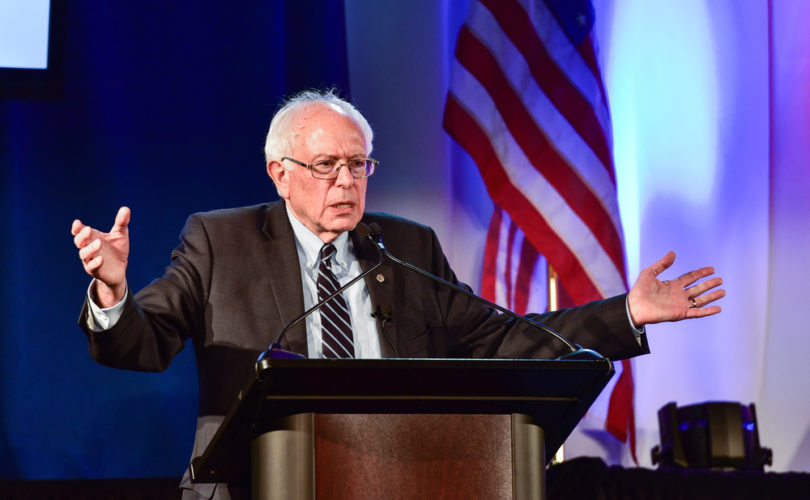 WASHINGTON, D.C., January 18, 2016 (LifeSiteNews) – The head of one of the nation's largest abortion advocacy groups has said that Democrats should stop talking about the traditional, two-parent family.

Sanders' traditional emphasis on economics “showed a lot in that first debate when he kept saying, 'You know we need parental leave, so mommies can stay home with their babies,'” Hogue said.

Last October, Sanders used child-rearing to promote federal legislation requiring employers to give 12 weeks of paid family leave. “Every other major country on earth – every one, including some small countries – say that when a mother has a baby, she should stay home with that baby,” he said. “We are the only major country” that does not.

Hogue said the idea outraged her.

Her criticism comes despite the fact that a plethora of social science data show that children raised in traditional, intact families do better economically and socially than those raised in any other family structure.

Hogue, a veteran organizer with left-wing groups like MoveOn.org and the Rainforest Action Network, said she supports federal employer mandates, but Sanders' reference to motherhood reflects his “very old mentality.”

Despite the emphasis, Hogue said, “you still love him because he's sort of like your grumpy grandfather.”

She said in an interview with the website Refinery 29 that she looks forward to redefining the “progressive” movement, so that reproductive and sexual issues displace economic concerns.

“I think that this sort of old model of progressivism, which is very much the white, working-class labor era progressivism, is being [challenged] in a really big way right now,” she said. “We have really been trying to explore this link between economic equality, abortion access, and reproductive rights generally. It's been super fascinating.”

A need for both parents to work, rather than raise children, means that “reproductive rights are increasingly a family issue.”

“You can't talk about economic opportunity and economic equality to me as a woman without actually acknowledging the whole thing is tied up in my family planning,” she said.

Her organization, on January 5, Hogue said that she was “thrilled to announce that the NARAL Pro-Choice America PAC has voted to endorse Hillary Clinton for president. Hillary has what it takes to fight Republican attacks on women's reproductive rights, and has the vision and experience to ensure women and families thrive.”

Planned Parenthood has also endorsed Hillary Clinton, who is seen as the prohibitive Democratic front runner, in its first-ever primary endorsement.