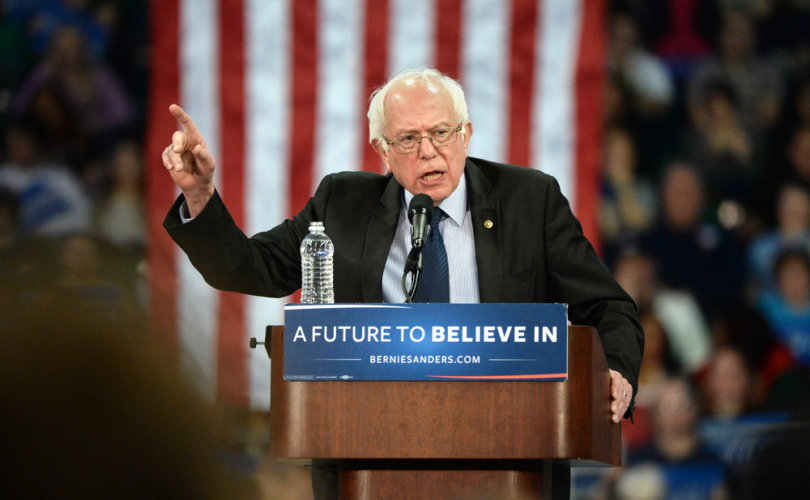 PHILADELPHIA, July 26, 2016 (LifeSiteNews) – In a passionate plea to his left-wing supporters, Senator Bernie Sanders called on secular progressives to unite behind Hillary Clinton in November in order to preserve the Supreme Court’s majority in favor of “a woman’s right to choose” and LGBT causes.

The first day of the Democratic National Convention took place amid bitter divisions between Sanders’ supporters and those of Hillary Clinton and the DNC’s leadership. Leaked e-mails revealed what Sanders suspected all along: High-placed Democratic officials worked against his campaign.

Tensions ran so high that Sanders supporters booed during the invocation, which mentioned Hillary Clinton by name.

Sanders, a registered independent who calls himself a Democratic Socialist, had his speech moved into the prime time network window after raucous protesters said the presidential contest had been “rigged.”

“I look forward to your votes during the roll call on Tuesday night,” the Vermont senator told his 1,846 pledged delegates before asking them to ultimately coalesce behind Clinton for the sake of abortion and other leftist causes.

“Hillary Clinton will nominate justices to the Supreme Court who are prepared to overturn Citizens United and end the movement toward oligarchy in this country,” Sanders said. “Her Supreme Court appointments will also defend a woman's right to choose, workers' rights, the rights of the LGBT community, the needs of minorities and immigrants and the government's ability to protect the environment.”

“If you don't believe this election is important, if you think you can sit it out, take a moment to think about the Supreme Court justices that Donald Trump would nominate and what that would mean to civil liberties, equal rights and the future of our country,” Sanders continued.

Donald Trump made a mirror-image case in his presidential acceptance speech, although he did not specifically mention abortion. Vice Presidential candidate Mike Pence asked Republicans to support the ticket for the sake of future court nominations and “for the sake of the sanctity of life.”

Trump had courted Sanders’ supporters over their mutual rejection of free trade agreements, especially the Trans-Pacific Partnership (TPP), favored by both Hillary Clinton and Tim Kaine.

Sanders rebuffed the notion repeatedly, saying he favored “a Democratic-controlled Senate, a Democratic House, and a Hillary Clinton presidency.”

This election is about whether Americans “leave this world in a way that is healthy and habitable for our kids and future generations.” Trump, “like most Republicans,” he said, “chooses to reject science.”

Sen. Sanders also announced the Sanders and Clinton campaigns agreed to a public option in ObamaCare health care exchanges and to guarantee that children of parents who make $125,000 or less would have taxpayers pay for their tuition to a public college or university.

Sen. Elizabeth Warren, D-MA, emphasized the importance of abortion-on-demand, as well, saying, “We believe – and I can't believe I have to say this in 2016 – in equal pay for equal work and a woman's right to control over her own body!”

“We’re with her,” she said, paraphrasing Clinton’s campaign slogan.

First Lady Michelle Obama and New Jersey Sen. Cory Booker also gave speeches that electrified the participants. Booker repeated the refrain that, under a Democratic administration, “America, we will rise!”

Mrs. Obama said, “I want a president who truly believes that everyone in this country matters.”