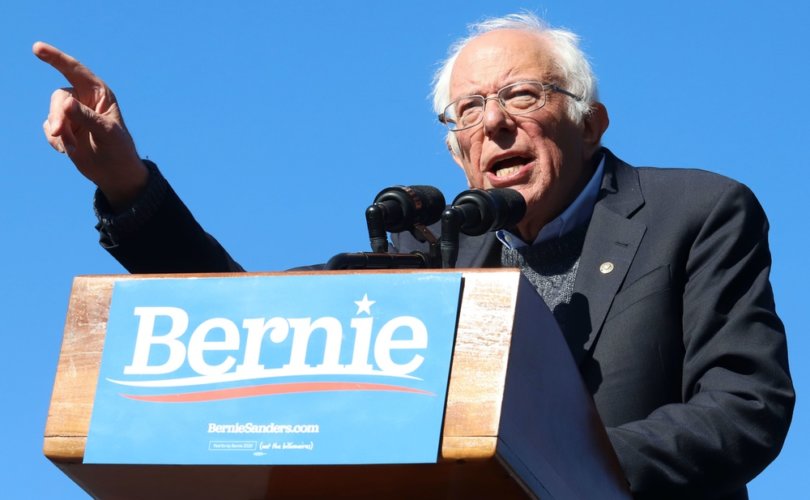 'We must, against stronger and stronger opposition, protect the right of a woman to control her own body,' the Democratic Socialist said in his victory speech. (Pictured in Madison, WI, July 1, 2015)shutterstock.com

MANCHESTER, NH, February 10, 2016 (LifeSiteNews) – After winning a lopsided victory in the New Hampshire primaries, Senator Bernie Sanders vowed to doggedly advance abortion-on-demand and the LGBT political agenda if he is elected president.

With nearly all the votes counted, Sanders won last night's primary by nearly two-to-one: 60 percent to 38 percent for Hillary Clinton.

Sanders, who is from neighboring Vermont, trailed Clinton in the state last fall, but his own reinvigorated campaign, and concerns about Hillary's possible indictment over secretly having a private e-mail server, had a wide variety of voters feeling the Bern.

In his long acceptance speech, Sanders promised to pay for tuition-free college education and single-payer health care by taxing “Wall Street speculation,” as well as pledging to promote a hard-Left social agenda.

“We must pursue the fight for women's rights, for gay rights, for disability rights,” Sen. Sanders said. “We must, against stronger and stronger opposition, protect the right of a woman to control her own body.”

Sanders was one of two presidential hopefuls to mention abortion in his speech last night. The other, his Senate colleague Ted Cruz, said he will “defend life, marriage, and religious liberty” after coming in third among Republicans, behind Donald Trump and John Kasich.

Exit polls show Sanders, a self-described Democratic Socialist who caucuses with Democrats in the Senate, dominated nearly every group of the state's voters, especially young people.

Clinton, who ran conspicuously to become the first female president, lost among female voters by 11 points.

She won among the oldest and wealthiest voters, as well as those most interested in experience and electability.

Among those seeking “honesty” in a candidate, Sanders upended Clinton by a whopping 86 percent (91 percent to five percent).

Meanwhile, NARAL Pro-Choice America stood up for its endorsement of Hillary Clinton:

.@HillaryClinton is a trailblazer, & we're as proud as ever to stand with her. #ImWithHer #NHPrimary pic.twitter.com/KS1PoTkyXD

After her supporters danced to Taylor Swift's “Shake it Off,” Clinton took the podium, where she did not concede defeat but vowed to press forward with her candidacy.